Our delightful spell of early Spring weather is continuing here in lovely Cornwall. High pressure is dominating, the sky is largely clear and sunshine abounds. It is, however, still a bit cool with overnight frost and a distinct chill on the light North Easterly breeze.

The point of this rambling weather report is that today I got the quality of light, albeit a tad hazy, but not the warmth! Actually, one of the great things about Cornwall is the quality of the light; the famous Newlyn and St Ives art movements grew up in the 19th Century specifically taking advantage of the beautiful Cornish coastal light. Hmm, the coast.

On that basis, this afternoon I fired up Harley, had a gentle trundle around the byways and eventually ended up at Tintagel Haven on the North Cornwall coast just as the sun was beginning to dip lower in the sky. I wouldn’t say we hit the sweet spot of the “golden hour” as today has pretty much all been quite golden, but the light was rather nice.

I wandered around on the foreshore, grabbing shots here and there, but nothing really excited me until I wandered into the large cavern known as “Merlin’s Cave.” Lying on roughly an East – West axis the cave burrows right through Tintagel Island and is open to the sea at each end. As I walked in the tide was on the flood and beginning to surge through from the West. I grabbed a couple of shots looking into the setting sun, but wasn’t very convinced; then I turned around and got the photo I was looking for! 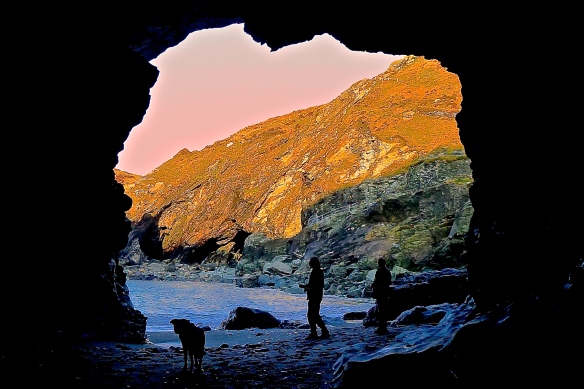