They are almost predictable for being unpredictable and if that doesn’t make sense, let me explain.

The geography of the Pyrenees mountain chain is interesting. They run roughly West to East from the Atlantic Ocean to the Mediterranean Sea and effectively cut the Iberian Peninsula off from the rest of Europe, according to some of my Spanish friends this is good, but for now we will ignore that bit!

By lying where they are, they act as a very effective weather-triggering machine; the damp winds blowing in off the Atlantic have nothing better to do than to drop all their water on the Pyrenees! This then creates what today is fashionably called the Foehn Effect, but when I was studying geography we called it a rain shadow. The most interesting thing about the Pyrenees is that their rain shadow can move from one side of the range to the other.

I’ve always humoured Gilles on this but the other day I had the opportunity, no make that need, to test his theory out.

I woke to low cloud and swirling mist. The previous days jaunt over the big legendary Cols was a pleasant memory and thank goodness I wasn’t planning to try to ride them today.

I did need to cross three other big ones though, Col d’Aspin 1489m, Col du Peyresourde 1569m and Col de Portillon1320m; the trouble was the cloud base was down to around 1000m!

Col de Peyresourde, legendary and wet!
Respect to the cyclist.

When you are doing a road trip in the way I do, in such circumstances there are two options.

Obviously if conditions were to make things really dangerous I would apply option 1, but as yet I can’t over the years really remember having ever done so! I’m not a “give up” sort of chap.

On that basis, it was option 2, as it always is! 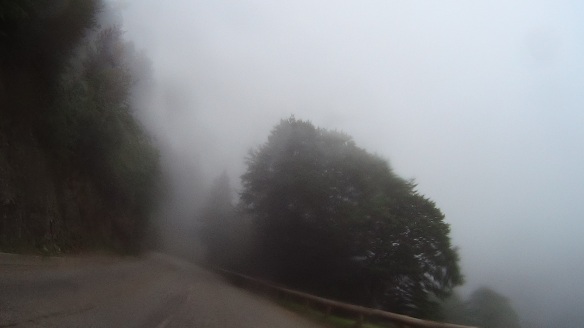 Handlebar Cam. Yep, sometimes I wonder why too!

Yep, it’s not worth dwelling on what the roads over both Cols were like; it was foggy, it rained, it was slippery and not much fun. We did it though and can always remember that in spite of adversity the job was completed; anyway it’s a good excuse to go back when the sun is out! 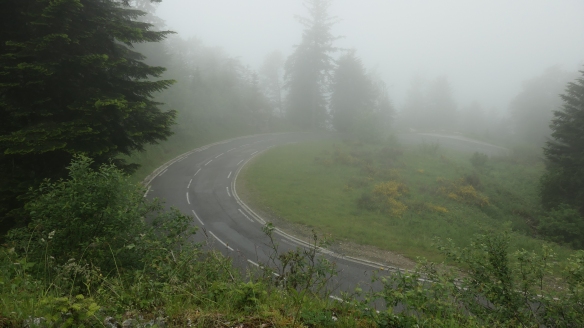 The last bends on Portillon.

Portillon lies slap bang on thee Spanish border and once we dropped down into the valley one thing was noticeable, no rain! Gilles may be right after all.

I had a banker in my pocket, there was a pass further into Spain that I had considered climbing, Port de la Bonaigua 2072m, seriously higher that the others; lets go see if the theory really stacks up? 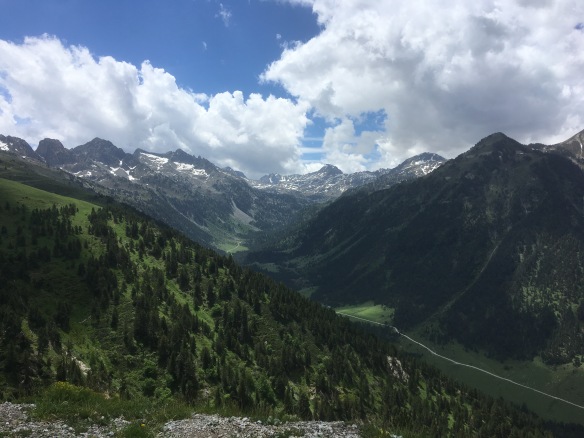 A couple of kilometres down the road and out popped the sun. We had a glorious couple of hours wheeling around the slopes of Bonaigua and taking in the views an all in fantastic warm sunshine.

Gilles, I owe you a beer! 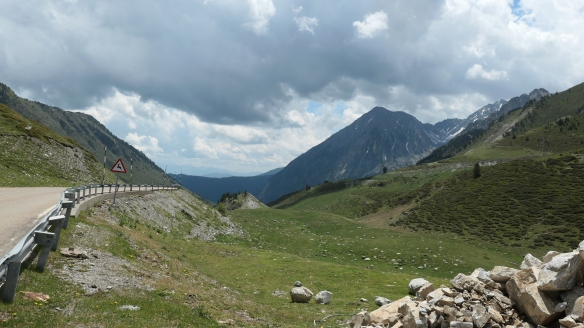 I think the photos speak for themselves, but I wanted to show the handlebar cam shot, because that was really all I could see!

4 thoughts on “These Pyrenees Are Funny”