It’s been a scorcher in France today, officially “Une Canicule,” a heat wave!

Last night the television news was full of the expected temperatures for the next few days. Throughout the country temperatures are expected to be in the range of high 30’s to low 40’s Celsius.

I can report that the meteorologists were incredibly accurate.

It seems to me that I’m getting pretty good at attracting weather extremes when I’m on my road trips. There was snow over the Grimsel Pass one June day, snow on the Silivretta Alpine road in September 2107, not to mention on that same trip minus 9ºC over the Albula Pass! Oh and the high temperatures of the South of France last year, plus the other “Canicule” that you can read about by clicking here.

In many ways today was sort of a transit day, just over 200 miles in total from Cahors to Soulac sur Mer. We passed through lovely countryside, but honestly I couldn’t wait for it to end, so energy sapping was the heat.

I drank a few litres of water and just sweated it all out of me…you really do not want to smell my riding gear this evening!

On one of my water stops I took a photo of the air thermometer on Harls; it was a bit hot in the Medoc!

Finding roads with shade was a bonus and at times I had to smile about a standing joke that Mrs Dookes and I have about French roads.

Many years ago on a Brittany Ferries sailing we were reading an article in their “House” magazine. You probably know the sort of publication, glossy and with little articles to pass a few moments before – Pow! – Here’s another advert for something you can/must buy on board!

Anyway what the article was about I cannot recall, but there was a nice photograph of a tree lined road with the title’ “A Quintessential French Road.”

I fell about laughing, it just caught me in a silly mood, but honestly in all the years that I’ve been visiting France I’m still trying to find that “Quintessential” one.

No, only a junior tree lined avenue…

Now it is true that in France you can find many roads lined with trees, often Limes or Planes. They may be lovely, but if you consider just how many kilometres of road there are in France the tree lined ones make up a very small percentage and they certainly cannot be accurately described as “Quintessential.” 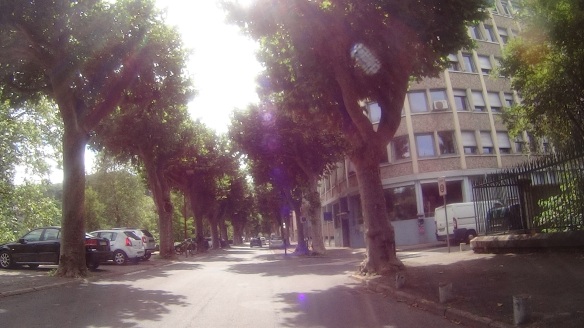 Incidentally, there seems to be no clear source of where the trees lining the road idea came from. Ask some folk and they say Napoleon Bonaparte, others will tell you it was the Romans, whilst many swear that the nobility were responsible. It’s a lovely mystery.

All is not good in the world of tree lined Avenues though.

The French “League Against Violence on the Roads, ” yes honestly, claims that trees are responsible for one in eight road deaths, because they reduce visibility and cause greater injuries when people crash into them and they want them cut down!

Needless to say the many of rest of the French population have a different view. My mate Gilles thinks that as you pass trees they make you slow down because you then realise how fast you are going….hmm, I not sure of that Gilles, all I know is that I enjoyed the shade of them occasionally today! 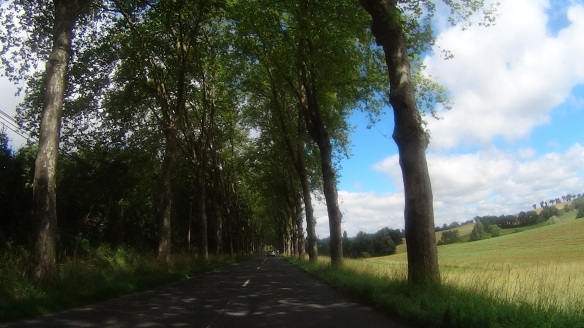 2 thoughts on “Une Canicule Mk2 and So Quintessential”