I like finding and exploring interesting places and if I can do that by motorbike, then I’m a very happy Dookes.

When I do my trip planning I am always on the look out for places that hold history or fascinating stories. Last year in the Pyrenees a golden opportunity presented itself that was far to good to miss. OK it did entail an additional 50mile diversion, but hey that’s what a riding trip is all about, the ride!

We had a leisurely start; our overnight farm accommodation was basic but comfortable, with the added bonus of stunning views and an outdoor swimming pool! 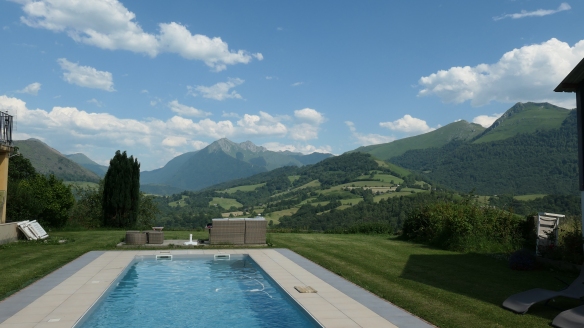 Harls and I trundled happily through the low Pyrenean foothills until we reached the valley of the Gave d’Aspe and turned South towards Spain.

It didn’t take me long to pick out the course of the single track railway line that winds up the valley almost parallel to the N134 road. This was the remains of the former Pau to Canfranc Railway.

Down in the Valley

Built by the Chemin de fer du Midi after a French government convention with Spain in 1904 this was intended to be a figurehead infrastructure scheme linking the two nations over a totally undeveloped new route.

The only problem was that the Pyrenees lay in the way.

The construction of the new line gradually wound its way towards the mountains, in July 1912 ground was broken for the excavation of the Somport Tunnel, three years later construction was completed, the tunnel is 7875metre long. Unfortunately the new line had to wait until 1923 before an station was built just over the Spanish border at Canfrnac and a further five years before it was opened!

From the start the route was always going to be difficult to operate, severe gradients added to the cost of construction, whilst the most fundamental problem was that the French and Spanish railways both had different track gauges!

France has the “Standard” gauge of 1435mm, whilst Spain has the “Iberian” gauge of 1668mm, neither country’s trains fitted the other’s track; Canfranc was always going to be an interchange point!

The Spanish were determined to make a bold statement with the new terminus, the main building is 240metres/790ft long, it has 365 windows and 156 doors; in it’s day it was the second largest railway station building in Europe, only Leipzig was bigger.

Although located high in the mountains, it must have been a busy place with the need to transfer all the passengers, baggage, parcels, mail and freight; not to mention all the Customs and other bureaucracy that fed from it!

By the 1960’s Canfranc’s glory days were long gone, but it’s fate was sealed on 20 March 1970 when a runaway freight train on the French side of the Somport tunnel derailed and demolished one of the largest river bridges. The French Government decided not to rebuild it but to truncate the line some 11km from the border at Bedous.

In Spain, Canfranc Station is still open, if two trains a day formed of a single car can be counted as open!

The main station building after years of neglect and standing derelict is currently under gradual restoration. The local government of Aragon plans to turn it into a hotel and visitor centre and at the same time build a more modern station alongside, because international trains are coming back! On the French side work has started to rebuild the line and with modern “Gauge Changing” technology through trains will now be possible.

We paused to take in the view and then rolled down the hill to Canfranc, just to see with our own eyes what all the fuss was about.

I think I’ll come back for a train ride one day.

It’s one of those lovely early summer mornings here at Dookes H.Q., the sun is shining, there’s a gentle breeze and all seems well in the world…until some crazy person messes it up.

Mrs Dookes is out, which means I can play a Jethro Tull album without snarky comments and grumbles; no, she really doesn’t appreciate Prog-Rock!

I’m also studying maps because trip planning time is here, actually that really came long ago, this is more like “Contingency Planning Time.”

This year’s adventure should see Harls and I heading off to the Pyrenees on the border between France and Spain in a couple of weeks, we have unfinished business in those mountains.

There is, however, a slight spanner in the works.

We are due to sail from Plymouth to Santander on Brittany Ferries lovely flagship and one of my favourite vessels, the MV Pont Aven. Unfortunately the lovely white lady is currently dry docked in the port of Brest with fairly major problems in her starboard steering gear. 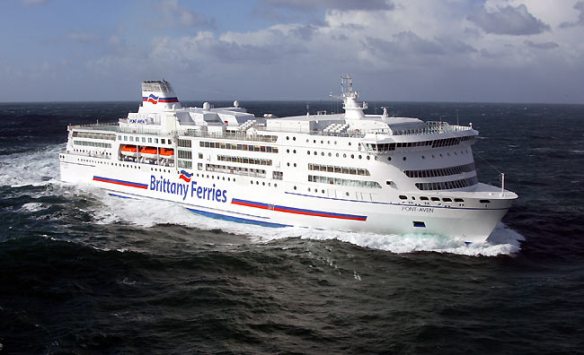 The poor ship has been a bit unlucky this year, back in April she suffered a fire in one of her engine rooms which led to a spell in the shipyard for repairs. Then, only days after her return to service, this fault in her steering system appeared.

One of the problems with modern transportation companies like Brittany Ferries is they operate on very tight margins, meaning that the assets are “sweated.” In plain language, they don’t have spare ships standing around doing nothing and those that they do have are kept earning revenue with minimal downtime. One breakdown can and usually does cause chaos to schedules. It’s difficult for operators to accurately predict when things are going to be back to normal and putting pressure on the engineers to get the job fixed as soon as possible can be counterproductive; better to do it once properly than to need to return through rushing or corner cutting.

Years ago a late friend and I undertook engineering services for a cross-channel ferry company operating out of Portsmouth. One of the jobs that we did was a repair on a vessel’s steering gear which necessitated a visit to dry dock in Southampton. One day I’ll dig out and scan the photo’s of that and maybe do a retro post about it. The job was straightforward enough, but getting all the parts, labour, heavy-lift equipment and inspection agencies together in one place when the dock was available was a logistical nightmare! I share the pain that the BF engineering team are going through.

Brittany Ferries operate a number of routes across the English Channel between the UK and France, plus serving Spain and Ireland. The impact of this breakdown has reached far and wide.

I have read some affected passengers grumbling that the company has not offered them good customer service by way of alternatives or compensation. From a personal point of view I do not agree.

Yesterday, I called into the Brittany Ferries offices in Plymouth to discus options for Harls and I. Basically, in the event of the ship not being back in service by our departure date, I was offered the option of being booked onto an alternative ferry to France, with costs if I have to travel to a different departure port and then provided with onward travel costs to get me to Santander as well as a refund of the difference in fares; or I could have a complete refund if that meant that I was unable to travel.

This I thought was perfectly reasonable and I’m probably going to accept the former, after all it’s no hardship for me to have to ride Harls for an extra two days!!

I did offer my engineering services as well, I was told to pop home and get my spanners; at least the staff haven’t lost their sense of houmour!

In the meantime, I’m really hoping that the MV Pont Aven is repaired as I do love sailing on her and best of all she has a fabulous restaurant.