I like finding and exploring interesting places and if I can do that by motorbike, then I’m a very happy Dookes.

When I do my trip planning I am always on the look out for places that hold history or fascinating stories. Last year in the Pyrenees a golden opportunity presented itself that was far to good to miss. OK it did entail an additional 50mile diversion, but hey that’s what a riding trip is all about, the ride!

We had a leisurely start; our overnight farm accommodation was basic but comfortable, with the added bonus of stunning views and an outdoor swimming pool!

Harls and I trundled happily through the low Pyrenean foothills until we reached the valley of the Gave d’Aspe and turned South towards Spain.

It didn’t take me long to pick out the course of the single track railway line that winds up the valley almost parallel to the N134 road. This was the remains of the former Pau to Canfranc Railway.

Down in the Valley

Built by the Chemin de fer du Midi after a French government convention with Spain in 1904 this was intended to be a figurehead infrastructure scheme linking the two nations over a totally undeveloped new route.

The only problem was that the Pyrenees lay in the way.

The construction of the new line gradually wound its way towards the mountains, in July 1912 ground was broken for the excavation of the Somport Tunnel, three years later construction was completed, the tunnel is 7875metre long. Unfortunately the new line had to wait until 1923 before an station was built just over the Spanish border at Canfrnac and a further five years before it was opened!

From the start the route was always going to be difficult to operate, severe gradients added to the cost of construction, whilst the most fundamental problem was that the French and Spanish railways both had different track gauges!

France has the “Standard” gauge of 1435mm, whilst Spain has the “Iberian” gauge of 1668mm, neither country’s trains fitted the other’s track; Canfranc was always going to be an interchange point!

The Spanish were determined to make a bold statement with the new terminus, the main building is 240metres/790ft long, it has 365 windows and 156 doors; in it’s day it was the second largest railway station building in Europe, only Leipzig was bigger.

Although located high in the mountains, it must have been a busy place with the need to transfer all the passengers, baggage, parcels, mail and freight; not to mention all the Customs and other bureaucracy that fed from it!

By the 1960’s Canfranc’s glory days were long gone, but it’s fate was sealed on 20 March 1970 when a runaway freight train on the French side of the Somport tunnel derailed and demolished one of the largest river bridges. The French Government decided not to rebuild it but to truncate the line some 11km from the border at Bedous.

In Spain, Canfranc Station is still open, if two trains a day formed of a single car can be counted as open!

The main station building after years of neglect and standing derelict is currently under gradual restoration. The local government of Aragon plans to turn it into a hotel and visitor centre and at the same time build a more modern station alongside, because international trains are coming back! On the French side work has started to rebuild the line and with modern “Gauge Changing” technology through trains will now be possible.

We paused to take in the view and then rolled down the hill to Canfranc, just to see with our own eyes what all the fuss was about. 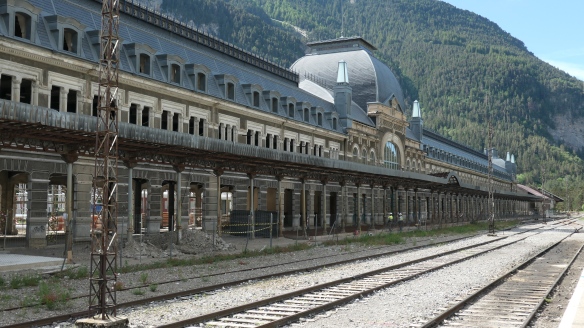 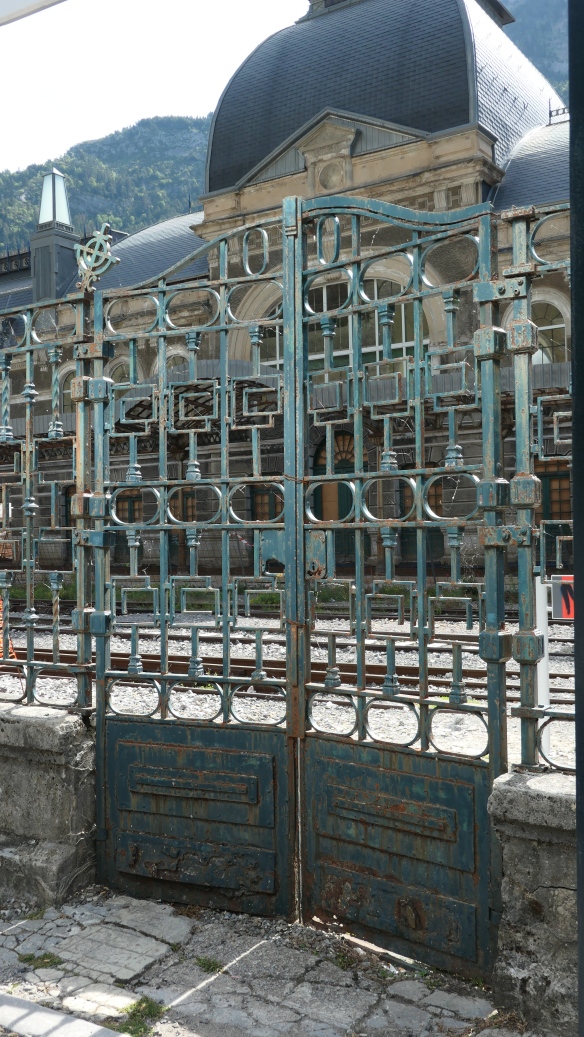 I think I’ll come back for a train ride one day.

I’ve come to the conclusion that I really like the Pyrenees and I’m beginning to question why I haven’t been back here more often.

OK, this is the fourth time that I have been here, but it’s really the first visit that I’ve managed to get under the skin of these mountains and feel their life vibe.

Undoubtedly riding on near deserted roads has certainly swayed my view on things and good weather so far has certainly helped. A couple of nice blasts blew away some cobwebs, but all in all, these mountains have a much more relaxed way of life and I’m loving it!

I adore the Alps and as mountains go, in Europe anyway, they really don’t get much grander, but there’s a problem with the Alps, the place is getting full. When I first discovered their delights over 45 years ago, there were a whole lot less visitors about. Then, when I got to start motorcycling around them, again, there were not too many others about.

Fast-forward to 2019 and things are a sight more busy there now!

Yesterday I rode just over 160 miles of stress free lovely mountain roads. They varied from tight single-track twisty stuff to wide-open main routes and they all had one thing in common…hardly any traffic!

The scenery is right up there with the best and the people are lovely.

Then we hit some of the classic Tour de France Cols, plus a few others.

I’ve had a yearning to ride Col du Somport 1650m/5413ft, on the France/Spain border for some time and to, horror of horrors, ride back through the Somport Tunnel as well! Tick those two off and I’m pleased to report that, despite my usual hatred of the things, that the tunnel wasn’t too bad at all!

The blast back down the N134 was fun, except for a bunch of road works, which didn’t really spoil anything.

Next we tackled the Col de Marie Blanque 1036m/3399ft. At that height it doesn’t seem much on paper, but wow, it’s a cracker!

Starting from Escot I was watching the marker boards that the cycle-mad French put on all the main climbs. The average gradient for this Col is around 8%, but for the early kilometres the boards kept saying only 2 or 3%. As the km’s ticked by, still no change, then at 3km from the summit all of it came at once, 8%, 10% and for the final km 11%! What’s more, there are no hairpins to ease the grade, it’s basically a straight road to the stars, goodness knows how hard it is on a bicycle!

We dropped into the small town of Laruns and drew our breath for the first big one of this trip, Col d’Aubisque 1709m/5606ft. This is one of the legendary Tour de France climbs and seems to have featured every year that I can remember.

From Larums it’s pretty cool and a scattering of nice hairpins got us in the groove. Eaux-Bonnes comes after a few kilometres, once a vibrant thermal spa town, but now showing signs that the good days have long gone; it made for a strange interlude on the climb. If I thought that the last Col was steep a 13% gradient soon concentrated the old mind! Over 16km later and through countless hairpins we arrived at the summit, it was tough all the way, but stunningly wonderful and deeply satisfying.

There’s a funny homage to Le Tour at the summit, three massive bicycles, painted Green, Yellow and Polka Dot; that’s the jerseys of the Sprint Champion, General Classification Winner and of course King of The Mountains!

This Col truly is the stuff of Tour de France legend and I was humbled to have ridden it’s hallowed route, but there was no time for self congratulation, we still had more work to do.

From Aubisque the road descends slightly and then turns sharply to the left. If I thought that there were no further surprises, I was wrong, very wrong.

Over the next ten kilometres the road sort-of hangs in space. It’s not really been cut into the cliff; it’s more floating on the outside edge of the mountain. Oh and there’s not really much in the way of barrier either, plus it’s largely single track, so I was glad to have been on the inside!

That line along the mountain face is the road!

Anyway, all this engineering was to lead us to our next pass, Col du Soulor 1474m/4835ft. Two things struck me about Soulor, apart from the road to get there, was the almost vertical drop as the road began to descend and that the place smelt of sheep and goat poo; there were hundreds of four legged woolly things all over the place!

Our final challenge was the daddy of them all in Pyrenees terms, Col du Tourmalet 2115m/6938ft, the highest paved French pass in the mountain range.

I know I can get a bit carried away with superlatives when it come to my Col adventures, but seriously, Tourmalet is beyond a legend to anyone who has half an interest in Le Tour de France. I’ve dreamed about riding it for years and years.

The pass has been included in the race more times than any other pass in France, after the 2018 edition it had featured 86 times and this year will also see a stage finish at it’s summit. I 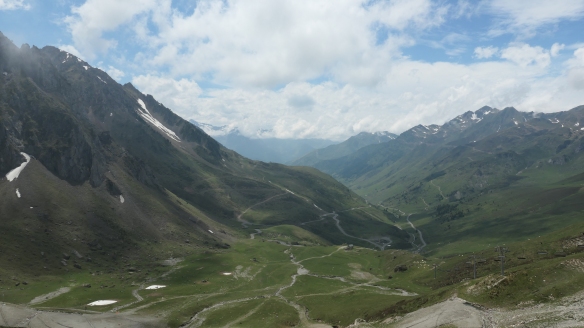 The road winding towards Tourmalet.

Tourmalet first appeared in 1910 and the leader over the Col was a chap named Octave Lapize who went on to win the race in Paris. Octave is famous for expressing his somewhat forthright views of the Tour organisers for routing the race over the Pyrenees high Cols, on Aubisque he shouted at them, 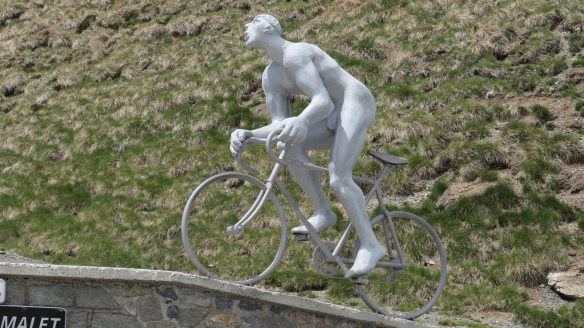 Octave Lapize on the summit of Tourmalet

He can’t have been thought of too badly though, as a statue of him is now mounted on the finish line at Tourmalet; here’s to you Octave!

Just Below the Summit of Tourmalet, the The Star of My Show!

For my part, with 1450cc of Harley engine pushing us along it was never going to be as tough as the cyclists have it, but it was hard enough work nonetheless. In addition it was great fun though!

Talking of cyclists, there was a cycling club from Holland making their annual pilgrimage to Tourmalet. It seemed to me that the plan was to ride to the summit and then drink as much beer as possible. To say that the top was a bit noisy and rowdy would be unfair, they’d peddled up there and in my book deserved all the beer that they could handle!