Hi Gang, sorry I’ve been off air again, but I’m back now and raring to go!

Regular Blogonaughts will probably realise that in many things I tend to be a bit of a stayer, once I find something that I like, I stick with it. Things like a comfy pair of shoes or a favourite pullover will last me for years and I’m just the same with motorcycles too.

My beloved Harls and I have been together for a long time now and over the many years we have evolved in each others company. I’ve added little things to make our ride experiences more refined and more comfortable for me and easier for her too.

It’s funny, but for some reasonI never really fully “clicked” with Big Blue, perhaps in the back of my mind I knew that she wouldn’t be around with me for long. On the other hand I’m getting along just fine with Hettie, my lovely Heritage Classic, who joined us at Dookes H.Q. in April 2018; in other words nearly two years gone by, where did that go!

The decision to part with Blue and buy Hettie wasn’t hard after I’d test ridden some of the new Harley Davidson Softail range just before their general release, they were stunningly good. It also didn’t take me very long to realise that I was onto a winner once I took delivery of Hettie either! She is one fantastic motorcycle. 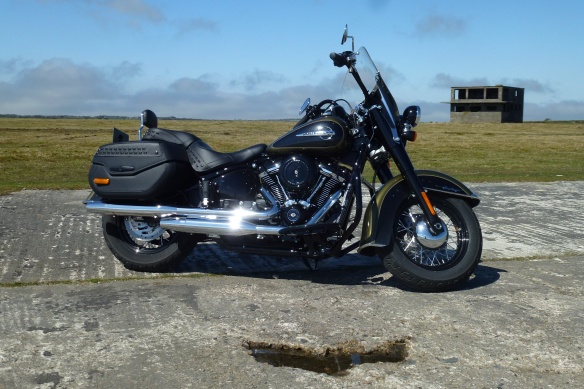 If you had told me a few years ago that I would purchase a “Heritage” Harley I would have just shook my head and walked away. The old Heritage Softail was to my eye the very typical stereotype caricature of what lots of Non-Harley riders think of when you mention the marque, all chrome and tassels! Definitely, not me. Then along came the new Softails and things were different and to my eye, different in a very good way. Although it’s fair to say that the bikes retain a certain classic period look, it’s understated and functional, but more than that, they are just sublime to ride.

At least Hettie would be, if I ever manage to get out on her!

Once I took delivery of her I quickly racked up 500miles and gave her an oil change. Now I know that Harley Davidson’s have their first service at 1000miles, but I’m an engineer of the old school…. oil is cheap, engines aren’t!

Since that 500mile oil change things slowed up quite a lot, life stuff got in the way, but now I’m starting to play catch up with Hettie, we’ve managed about 2000miles since then; that’s 2000 smile-filled miles, I’m really loving this bike!

As she looses that “new machine stiffness” I have begun to appreciate just how nice these new Softails are. Although Hettie “only” has the 107cubic inch engine, that’s 1745cc in metric, it’s more than ample for the job in hand and the way the power smoothly feeds in when asked for is lovely, there’s no bad habits with this engine.

As I get to know Hettie, I’ve begun to notice what’s missing and to make the little improvements that will make her my motorcycle.

Some things are very small and simple. I like to know the time when I’m riding and although the multifunction display will show me that, I like a real clock, so there’s an analogue clock on the right hand side of her handlebars now.

With a matching air temperature gauge on the left. 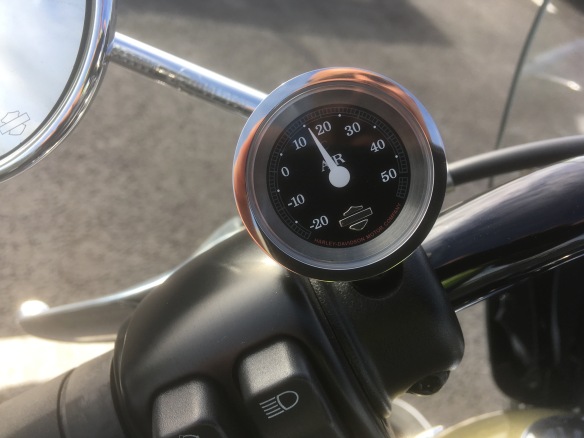 On the engine bars I now have a pair of what Harley calls “Soft Lowers.” These are simple slip on wind protectors that keep the weather off my lower legs very nicely, yep, I’m getting older and liking my comforts!

I have a pair of “highway peg” footrests that I may just mount on those engine bars in due course.

The Givi “Tanklock” system is really designed for adventure bikes and features a docking ring that is screwed around the tank filler, various different size bags can then be simply locked onto the ring as the user wishes. This system is not designed for Harley Davidson’s, but I figured out a way of attaching one of the rings to Harls’ rack and I have found the ability to have a quick release small bag to be invaluable. I’m now going to do the same with Hettie, there’s no point in having engineering skills if you don’t use them! I’ll show you that in a future post.

The latest shiny things to go on have been a pair of Screaming Eagle Street Cannon slip-on exhaust mufflers.

These are the first part of what Harley Davidson call a Stage One tuning package and although they give the bike a nice low bass exhaust note, they are not noticeably louder and best of all they are street legal!

We followed that with a “Stage One Tuning” engine re-map and a new air cleaner to help her breath easier.

Next up I looked at more luggage options. The original equipment panniers are ok, but Leather Pro make some lovely bags that are stylish, slightly bigger that the OE ones and have a better lock arrangement than Harley’s design, which frankly gets in the way. The Leather Pro’s have been fitted, along with a pair of luggage protector bars.

Finally, for now anyway, I’ve splashed out on a Garmin Zumo 595 Sat Nav and Touratech mount. Yes, shock horror a SatNav!!! Actually I’ve had one on Harles for a couple of years now, they can be very useful dodging the traffic!

I’m now having a think about what else is needed…as opposed to what I’d like to add! 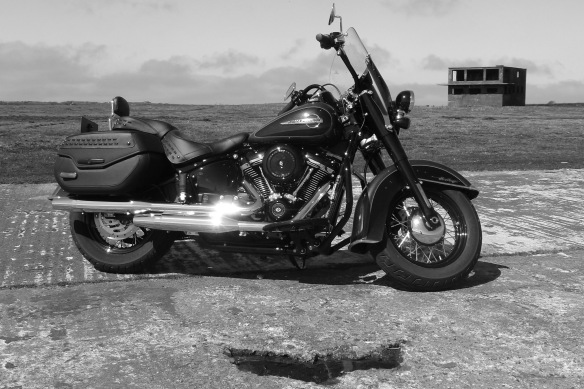 For now, that’s enough to be going on with, other than just enjoying this wonderful addition to my riding life.

7 thoughts on “Making Hettie Mine.”