It’s like this people, the old itchy feet syndrome has kicked in again…!

I though that the idea of this “Early Retirement” stuff was that I wasn’t as crazy busy as when I was doing a real job. Pondering for a moment I realise that actually having a “Real Job” give you structure and boundaries, not having one makes everything a bit blurred.

As a result when someone says to me can you help? I inevitably say yes; which is good and bad at the same time.

Certainly life has taken on a lovely unpredictable path and really interesting things come my way to get involved with, which for a variety of reasons I can’t tell you all about; I know, it’s a cruel tease, but that’s just the way it is!

I do know, however, that it’s definitely the right thing for me at this moment in time.

That said, of late I haven’t been out on two wheels quite as much as I would like.

Which is why I’ve said “Screw It, time to ride!”

This coming Wednesday I’m off to La France and am going to chase down a route that I’ve been promising to ride for years – La Route des Grandes Alpes. Click here to read more about it.

Basically it runs from Thonon les Bains, on the shore of Lake Geneva, to the Mediterranean Sea at Menton, via all of the high French alpine passes. It’s going to be quite some trip! 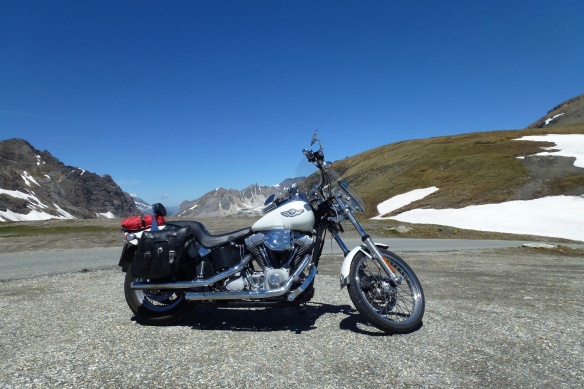 “Harls” in the High Alps

I’m also taking my trusty “Harls” with me, for lots of different reasons, which I’ll explain more as we go along the route.

We leave on Wednesday, which gives you all time to saddle up and ride along with us on the road, as ever I’d love to have you tag along!

“Dookes is on the road again
Wearin’ different clothes again
Dookes is turning handouts down
To keep his pockets clean”. (With apologies to Manfred Mann!)