The Ritten Plateau is delightful, lying high above the wide Iscarco valley and the bustling city of Bolzano it enjoys clear air, cool mountain breezes and stunning views of the Dolomites.

Even cooler is the SS508 road that runs north to the high mountains of the South Tyrol; this is the same road that I fell in love with as it climbed out of Bolzano twisting through vineyards on beautifully engineered hairpins.

Beyond Ritten the roads slots into a tightening mountain valley and starts to climb towards Passo di Pennes following the tumbling crystal waters of the Tevere Talvera.

Riding the route on Harls last September, the air was crisp and still; snow had fallen the day before and the slopes ahead were dusted with white beauty. The going was steady if relentless, the views increasingly lovely. 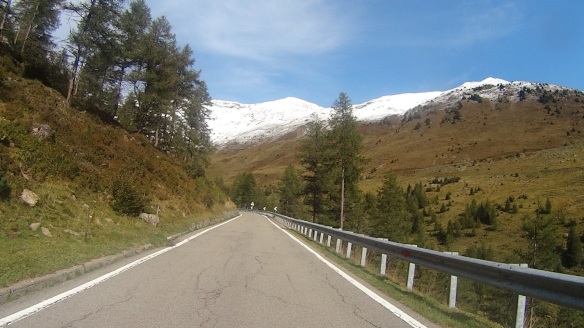 Predictably with altitude the performance of my beloved Softail’s engine began to drop off in the thinner air. Some folk might find that annoying, but I rather like it…. it’s just part of the whole character of Harls! 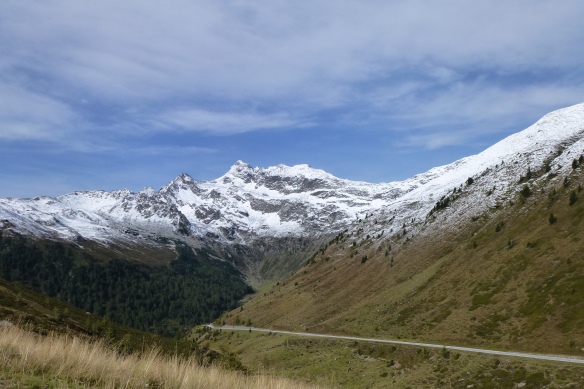 Nearing the head of the valley were a couple of hairpins, nothing spectacular, but enough to keep us honest. At the pass, Passo di Pennes/Penser Joch 2211m (7267ft) above sea level, I pulled to a stand in slushy snow and killed Harls engine, boy was it cold!

Views all round were spectacular. I fell in love with the place pretty much instantly!

The road North could be seen ahead, dropping down from the snow line towards mixed forest in a tempting “come ride” way. Soon we were rolling along it, splashing through melt-water that was pouring across the blacktop from rapidly thawing snow; I can’t really explain how good it felt…this is what we came here to do and I could do it forever! 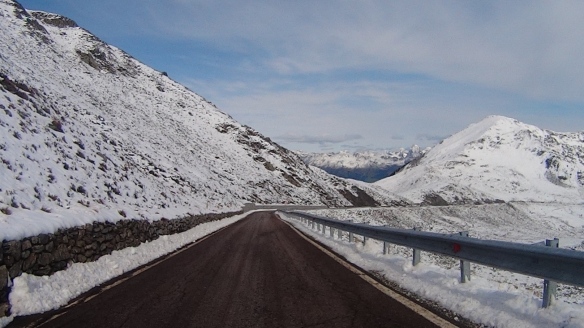 Often, dropping down from a high pass can be an anticlimax, but not on this road, this was special, very special; we dropped down through high alpine woodlands on an almost perfect surface, but with the promise of more good things to come.

Near Sterzing we turned left onto the SS44 and aimed for our next pass, the Jaufenjoch or Passo di Monte Giovo as it is called in Italian.

At 2094m the Jaufenjoch is certainly not the highest pass that I’ve ever ridden, but trust me people, it’s one of the best!

The scenery is impressively alpine, but it’s the road that is the star…. whoever engineered this masterpiece should be canonised, it’s simply heavenly! To explain what its like….. if you were to gather all of the very best corners from the greatest motor racing circuits in the world and then drop them on a mountain in the Tyrol and you’ll sort of get half of the idea! 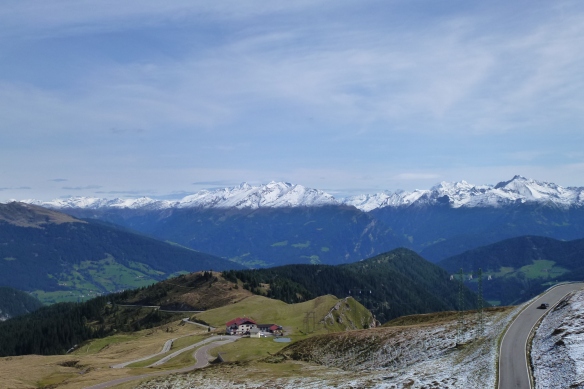 Oh yes there are also two cosy little Refugio cafés at the top, one each side of the summit, what’s not to like? 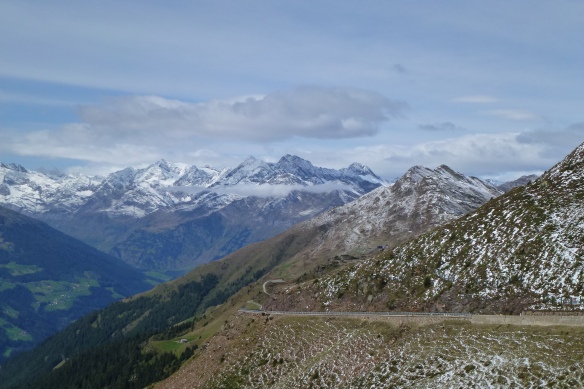 I had a real job to decide which side of the pass I enjoyed most as we wheeled effortlessly down grade into the small but busy mountain town of Sankt Leonhard in Passeler and took a right onto the SS44bis and our top prize pass of the day the Timmelsjoch 2509m/8321ft above sea level.

Lying right on the boundary between Austria and Italy, the Timmelsjoch and its high alpine road, (toll on the Austrian side!) is supposed to be one of those “must do” routes for us motorcyclists.

Let’s just say that it was Ok, but I’ve ridden better.

I suppose that it’s a function of me riding so many great alpine roads and over the years I’ve got a bit fussy.
My criteria for a great road now is:

Which meant that the Timmelsjoch failed on items, 2,3,4,6 and 7, plus there was that toll on the Austrian side!

Yeah I know, stop moaning Dookes and tell more about the ride… 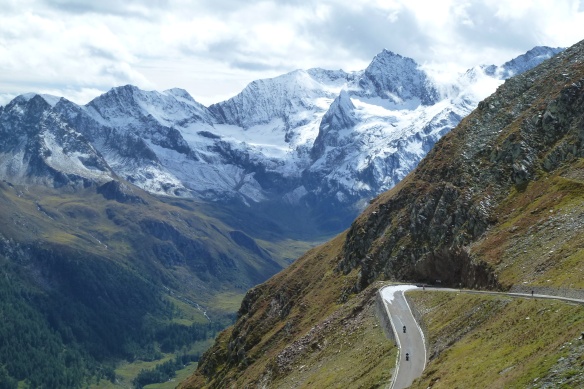 To be fair, the ascent from Sankt Leonhard was fine for about 10km then it all got a bit messy. There was a stretch of road works that bunched the traffic up badly, then the surface was terrible in places and only dreadful in others. Tight hairpins and traffic are not fun and neither is a long wet, unlined and pot-holed tunnel that delivered us to something resembling a high altitude building site!

The summit Refugio was solid with people and parting with €19 for the return toll ticket a very painful experience!

All the time I was thinking “I’ve gotta get back to where I’ve come from!”

….and that’s exactly what we did!

First, back to Passo di Monte Giovo for an Alpine coffee and slice of home-made Apfel Strudel, this is the Tyrol after all. 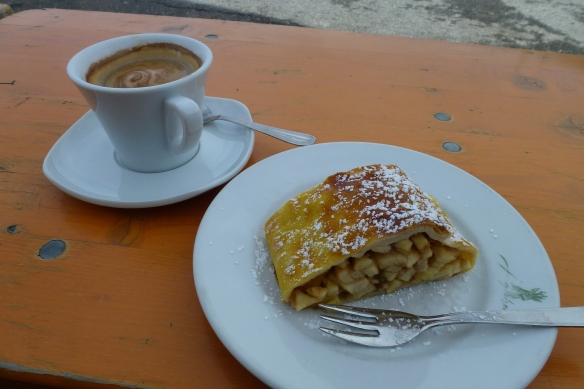 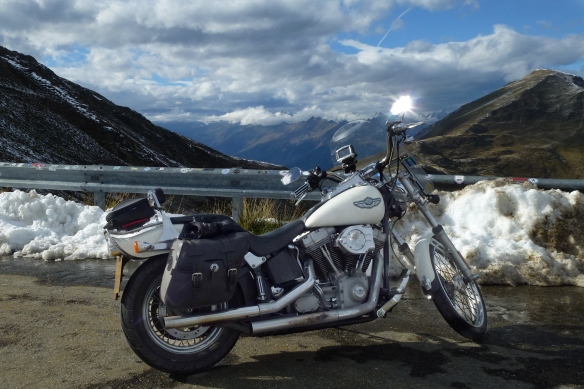 Then to Passo di Pennes in time to watch the shadows start to lengthen as the mountains grew cold again, evening was coming. 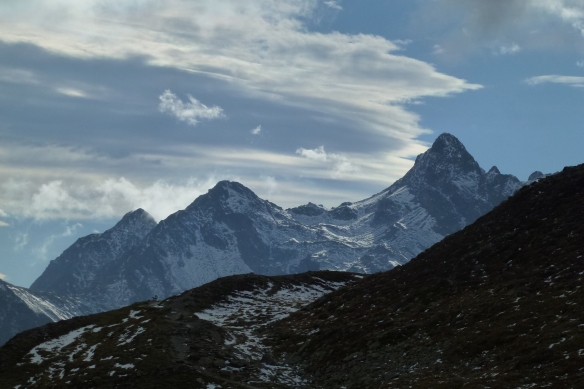 We triumphantly swept back downhill towards Ritten, fuelled by strong coffee and air with a tad more oxygen.

Yes, when it comes to mountain passes, high is impressive and the sense of achievement great, but like the saying goes “size isn’t everything!”

“I’m the man on the silver mountain.”