Well, my beloved “Harls” and I are back on the Continental roads again!
Today we’ve just reeled off 360 miles, (600 kilometres sounds more impressive though!) since rolling off our overnight ferry at Roscoff in Brittany.

For those who like checking our progress on the map, we travelled via Rennes, Angers and Bourgueil to our overnight stop with my old friends Jacques and Claudine, just East of Vierzon.

I’ve got to admit, I’m pretty knackered tonight, that’s “tired out” for those of you not used to my colloquial English! I absolutely adore every second that I ride Harls, but I’d forgotten just how much effort she demands, compared to cruising on the big blue Ultra Limited. 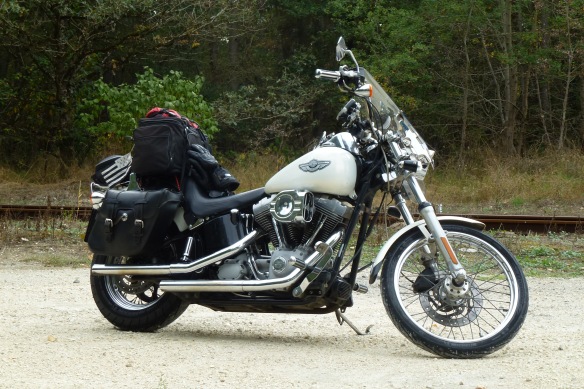 Harls is safely tucked away in Jacques’ barn for the night and here I am sitting on the terrace, sipping a glass of rather splendid local red wine, watching the sun drop in the western sky as a warm breeze rustles the Autumn tinted leaves; tinnitus is screaming in my ears, my wrist aches from holding the throttle open (oh yes, I do mean open!) my backside is. . . tender, but I’m happy, very very happy.

The old team is back doing what we do best, having fun on the open road.

Now a little observation; I’ve come to the conclusion that there are three types of French Dual carriageway/autoroute:

Today we sampled all three, I’m not going to dwell on the bad bits, but those wonderful French road builders have been stealthily rebuilding the D775 between Rennes and Angers and it’s a beaut! Lovely sweeping curves, enough gradient to make it interesting and smooth as can be!

Somewhere along the road we slipped from Brittany into the Loire valley. It’s strange, but for however many years it is that I’ve been travelling in this part of France I’ve never been able to spot exactly when the transition takes place. It’s like…”Yes, this is nice familiar Brittany.” Then a bit later, “Oh, this must be the Loire Valley!” I really have tried to spot the dividing point, but no, not managed it yet.

I always find the River Loire a bit difficult to define. Yes, it’s France’s longest river and it’s also one of the great rivers of Europe, but it’s a lazy old thing meandering around like a big question mark from the Massif Central to the Atlantic.

The whole concept of the “Loire Valley” is a bit baffling, as for most of the time the landscape to me resembles a prairie with a river running through it and it’s not just the Loire that’s included, its tributaries such as the Cher, Indre and Vienne get lumped in as well!

I’m not complaining though. The Loire valley is a veritable treasure trove of some of the best things France has to offer. It’s largely temperate climate and fertile soils have brought great wealth for centuries, it’s a big wine growing region and as a result there are over a thousand stately châteaux of all shapes and sizes.

Today I wanted to look in on one of the most famous, Château de Chenonceau. This place has been intriguing me from a distance for years, so I had to go check it out.
Oh dear, what a disappointment.

Now I’m sure that if I could swallow my pride and elevated view that I am a traveller and not a tourist, when actually I’m really a leather clad motorcycle riding tourist, then I might get along fine with the thousands of folk swarming between the car parks and the Château…but just one glance at the sandal wearing, short-clad hoards and I did a graceful U-turn and carried on East! Jacques roared with laughter when I told him.

Thanks to Ra-Smit for the use of the photo and yes, the Château really does partly sit out on a bridge over the river!

So back to the “terroir” of the Loire valley…the soils are largely sandy and calcareous and that generally means one thing….wine! Famous appellations such as Touraine, Saumur and Bourgueil, are known the world over; indeed some say that Saumur sparkling wines are better than Champagne.

It’s not just grapes that they grow here, the area produces thousands of tonnes of arable crops. All over the place you can see grain elevators, known as “Prairie Skyscrapers” in Canada and the USA. 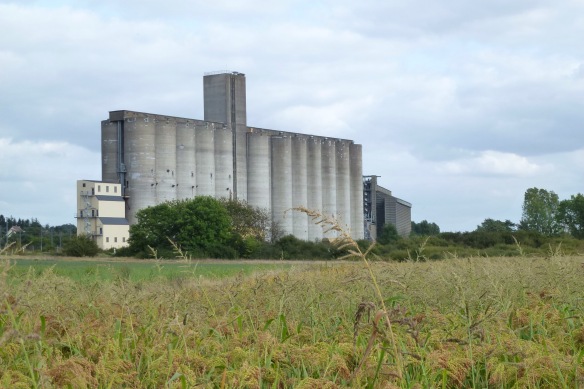 The grain harvest is long over now, but the farmers are still busy; currently it’s maize that is being cut. Next will be the sunflowers, with the start of Autumn their bright yellow petals have withered and fallen. Where once their happy little faces looked up and followed the sun, now they hang their heads sorrowfully looking for their lost petals and contemplating the turning of the season. In French the sunflower is called “tournesol” – “turns to the sun,” I like that!

9 thoughts on “Looking For The Loire (Back in Black)”