Hmm. There’s been a notable lack of posts from Dookes for the last few weeks. No, it’s not writers block…I’ve just not really had much to say.

I believe that Mark twain once said,
“It is better to keep your mouth closed and let people think that you are a fool, than open it and remove all doubt.”

Thinking about it, I’ve known quite a few folk over the years that fell into the latter category!

As folk say here in Cornwall, “What’s on?” Meaning what’s been happening then?

Well, the season is marching forward and Spring has firmly taken charge. Wild flowers are filling our hedgerows, birds are busy building nests and only this week I spotted the first migrating swallows cutting across a clear blue sky at Dookes H.Q.. In many Cornish gardens magnolias and camellias are in full bloom, their blossom may only last a few days, but I think they are worth the space that they take up for the rest of the year!

Magnolia in bloom at Launceston Castle.

On the motorbike front things have been quiet-ish. ‘Baby’ has a new set of brake pads; the old ones lasted 15,000 miles and included two Alpine adventures, so I guess that’s pretty fair for a bike that weighs over half a tonne! ‘Harls’ has been serviced and is pretty much looking as gorgeous as ever, but hey I am biased! 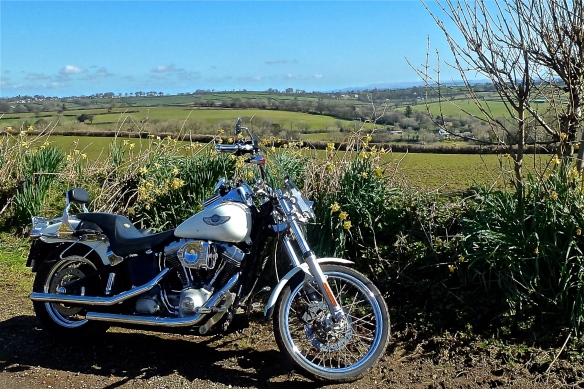 For one reason or another I always seem to be pretty busy and unfortunately that’s been eating into riding time…but I have been out and about on ‘Harls’ for a couple of nice head clearing ‘fifty milers.’

It’s been pretty weird though, riding a motorbike with G’s major crash still very fresh in the old memory. The whole thing has really shaken me, not the least seeing the photos of the scene and also riding past the very site. I was recounting this to another friend the other day. I was sort of trying still to make sense, is there is such a thing, of what happened. He listened intently, then told me that he believed that as I was what he called a “logical” person he was sure that if I only stopped and thought about it properly, without emotion, that I could work it out.

You know what? He was right!

I accept that riding a motorcycle has it’s inherent risks; add into the mix a large dose of idiot/inconsiderate/impatient other road users and the odds start to stack up against any two wheeler, powered or pedal. It’s part of a bunch of reasons why I keep up my advanced riding qualification and have regular assessment rides; it’s all about managing the risks as low as possible. The unexpected can and as G proved, does happen. I’m also a bit fatalistic and every time I ride out of our drive I steal a look over my shoulder, just in case…

Talking of G, he is making steady, if very slow, progress. I try to see him every week and really look forward to my visits with him. We are a proper pair of “Old Gits,” putting the world to rights over cups of coffee, grumbling about just about everything and also fiendishly plotting future adventures.

Of course a lot of our plans are based around and depend on G’s recovery.

Lets not under exaggerate it; G’s body is pretty badly smashed up. Add into the mix the continuing treatment he’s going to have, it’s going to be a long haul and that’s without the stress that he goes through thinking about it all. Last Tuesday G had to have some of he wires holding his right hand together removed; he told me that the surgeon used a tool like a high-tech pair of pliers to pull them out, no anaesthetic was used, ouch!

Understandably, G has good days and not so good ones. I try to be upbeat, which generally is my nature anyway, but I do find it pretty hard sometimes when he gives me a bit of a grim reality reminder. Fortunately our sense of humour is pretty similar, “warped” was the word Mrs D used once. I have thought on a couple of occasions that I should have been a little less hasty with my suggestions…such as offering to loosen the screws in his arm…!

Oh well, its only what mates do!

On another matter, planning has begun for my next big solo road trip and that’s always an exciting time. More details to follow…

“Call me the breeze
I keep blowin’ down the road…”

10 thoughts on “Keeping My Mouth Shut!”