The Great Weather Clerk must have been reading my post last week; minor grumbles about the damp, grey misty days were answered with bright blue skies, sunshine and crisp dry air. Oh yes, I almost forgot, freezing temperatures as well.

…and that suits me just fine.

You see I had a few “errands to run,” as my dear late Grandmother was want to say and what better spirit lifting way to do it than on two wheels of course!

First up I needed to take my laptop into the Apple Store for a memory upgrade. I really love my Mac computer, but one thing that bugs me about Apple is the way they bombard users with operating system upgrades. Yeah I know that this includes security improvements, allegedly, but each upgrade inevitably makes the computer run a little bit slower until, eventually, the thing becomes a dithering, if somewhat expensive desk lamp! There are two Apple stores near Dookes H.Q., one in Plymouth, 25 miles, and one in Truro, 45 miles away. Better go to Truro then and take the longer route too!

Truro is the County town of Cornwall, actually it’s a city, though quite small as cities go, with a population of only 18,750 people. It’s also the only city in Cornwall. Until politicians started handing out “city” status to all comers, a City in the UK could only lay claim to the title if it had a Cathedral and Truro has a gem.

The Cathedral of the Blessed Virgin Mary, or just Truro Cathedral to most people, was built between 1880 and 1910 in the Gothic Revival style. It’s also one of only two Cathedrals in England to possess three spires; the other being Litchfield in Staffordshire. Nestling amongst a rabbit warren of narrow streets it’s quite difficult to get a decent photograph of this delightful building, but the West facade shows itself nicely!

Annoyingly the Christmas lights were being taken down so hence the “cherry picker,” but I don’t think that it spoils the view too much.

Just around the corner from the Cathedral is Coinage Hall Street, still covered in wonderful granite setts, which are a bit tricky on a motorbike especially in the wet, but look lovely!

The Coinage Hall at the end of the square was built as the Cornish Bank in 1848 on the site of the old Coinage Hall where twice yearly tin was brought to be assayed and taxed.

I really like Truro and one day I’ll do a proper post about the city when the sun is a bit higher in the sky, but for now I hope that this little taster will whet your appetite.

As is usual when I have time on my hands I took the even longer way home, after all better days like this are to be savoured and enjoyed. Once back at Dookes H.Q. I even had time to walk the dogs and take in some more of the lovely county in which we live. 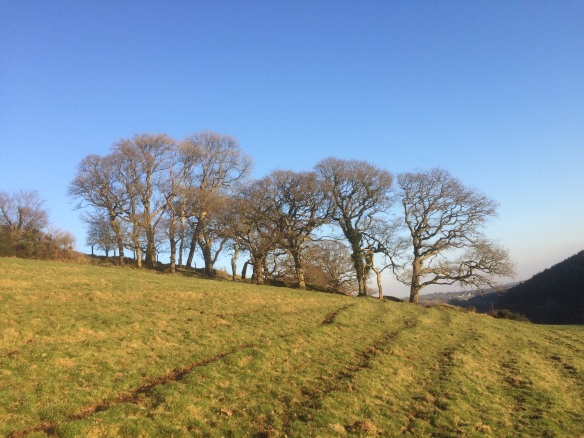 Blue sky, crisp clean air and right on my doorstep!

“These are better days
Better days are shining through”