Right, so everyone thought there was going to be a photograph of a Harley or some other motorbike. Well, to be honest that would have been nice, but as I can’t ride one and take a photo of it at the same time we will all have to settle for something else!

Again the old Dookes grey matter has been stretched, but I came up with something that I think fits the task.

The lunchtime train running bunker first on the Bodmin and Wenford Railway, near the wonderfully named “Crabtree Lane” bridge. 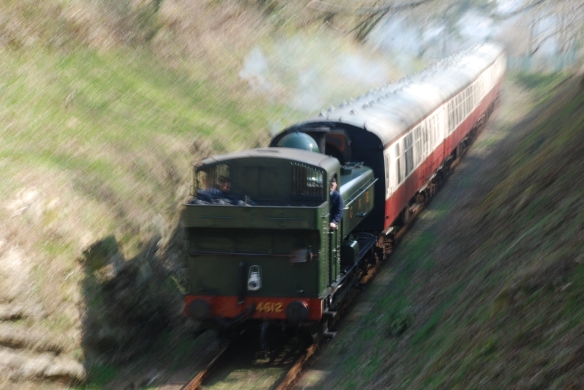 My variation on the “Motion” theme was to use a slow shutter speed and “pull” the zoom at the same time as shooting, it’s like panning, but use it for when something is moving towards you. The background blurs, but the subject should stay reasonably sharp.

It sorta works, but not the best in my opinion!!! The shot certainly has blurred motion though.

I have to admit that I’m not a great fan of this sort of photograph, it’s an engineering mindset I guess, I like things to be sharp. I’m happy to hear what you think though!

“Gonna be your man in motion, all I need is a pair of wheels”

PS Don’t you all think it’s time for a motorbike type post? 🙂