OK, so I said we were on a mission!

One of the objectives of this trip has been to knock off a load of the high mountain passes or Cols, en Français.

Col de La Bonnette lies south of Jausiers, where I’m staying tonight, on the D6.
There are, I believe, several claims as to the highest asphalted pass in the Alps, but this one actually wins! Well only because the inventive French cheated and built a totally useless and otherwise pointless loop, just above the real pass, by 87m at it’s highest, brilliantly bonkers, but I love it!

There are signs all the way up telling you it’s the highest, but amazingly they all get the height wrong!! Even more crazy; build the thing, but hey, tell people the correct height! For the record the pass is 2715m(8907ft) and the loop is 2802m(9193ft). So can we agree, it’s pretty high?

The road from Jausiers really kicks you in the pants from the start, as the hairpins start before you pass the town limit sign. The surface all the way to the summit is fantastic, in places nice and wide, in others a bit tight but ok. It’s about 15 miles to the top and takes about half an hour or so. There are some sweet straight bits, but just about every type of bend/curve/corner you could wish for and some that you wish were not! It was bloody hard work on Harley, not really the bike for this kind of road or altitude, she only has a carburettor and was desperately trying to gulp in the thin air long before the top, where she was surprisingly like an old Honda CB500!

The road climbs through woods and passes through the tree line into ever more barren country. There were still pockets of snow on the more shaded slopes which made a stunning contrast to the dark rock. In a number of locations Alpine Marmots were scampering along and across the road.

Near the top the geology changed to metamorphosed shale, which gives the Col and summit a moonlike appearance, vegetation is almost totally absent. Anyway enough words, pictures say more! 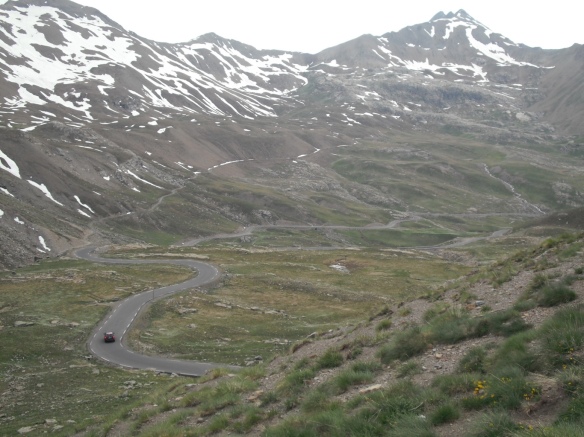 Resting at the top.

I told you there was snow!

Total miles for today was 255. Which brings the total for the last three days to 928, or 953 since leaving home!

I think I might find another pass or two tomorrow, riding part of La Route des Grandes Alpes, through Briancon, Galibier, L’Iseran and Val D’Isere.

Catch you all later.

3 thoughts on ““The Highest Paved Road in Europe””