I’m sitting in our log cabin at Dookes H.Q. and looking out at the world.

The view from the cabin.

All is quiet, still and largely silent, save for the birds singing and the odd noise from sheep in the field.

Our Planet is getting quite a bit different from what it was a few short weeks ago.

Are we managing what is happening, or are we looking at extinction from the wrong end of the telescope?

What I do know is that thinking of better days helps!

Earlier today I was scanning through some photos taken on my Pyrenees trip last year, they made me smile. Sunny days, people mixing freely, people enjoying themselves.

I spent my first night in the Pyrenees in the small village of Sare, which apart from agriculture and lovely scenery doesn’t have much else except campsites catering for the annual summer influx of visitors.

Just back down the road though at Col de Saint Ignace was the reason for me passing this way and after breakfast I set out to investigate “La Petit Train de la Rhune,” The Little Train of The Rhune.

This is an historic metre gauge rack railway at the Western end of the Pyrenees, which over 4.2km/2.6miles climbs to the summit of the Rhune Mountain.

The plan to build the line was first drawn up around 1908 and local Government law was passed soon afterwards with construction starting in 1912. Opening didn’t happen until 1924 though, World war One got in the way! 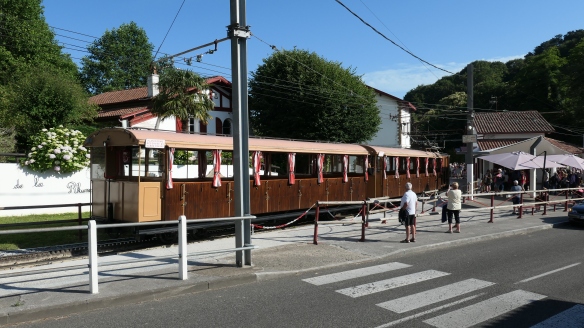 The railway climbs 736metres/2415ft from the base station to the summit and for the technically minded is equipped with the Strub rack system, which allows the train to literally pull itself up the mountain by a gear wheel engaging with a rack that is laid between the rails. Normal railways are pretty useless at climbing steep gradients, as the coefficient of friction between steel wheels on a steel rail is not high! The rack and pinion system gets round that problem.

One feature that makes this railway pretty special is that it is powered by three-phase electricity and there are only three others like that in the world! That’s pretty cool for an engineering geek like me!

Services are operated by a four wheeled electric locomotive that pushes two passenger coaches up the mountain, peculiarly each coach has a four wheeled bogie at one end but only a two wheeled axle at the other; I haven’t been able to figure out why!

The railway normally operates from Mid-March until the end of September.

I considered having a quick ride, but the first train of the day was fully booked and I really didn’t feel like hanging around to see if I could get on the next one…but hey I saw it and got a few nice photos!

Just the thing to look back at and raise a smile to sunnier times!