As you all know I really love my old Harls.

Some of you however, will not appreciate that she is also a link to two long departed special people. Today and the previous few days were the anniversary of the passing of Trudie and Andy.

Both taken too young and both missed immensely.

You can read more about them and their link with Harls here.

I was thinking about the two of them today when I stopped at a service station that claims to be to be at the very centre of France on the A71 AutoRoute.

Then when I came to leave all hell let loose!

Harls wouldn’t respond to either of my key fobs and when I tried to start her the alarm went off, again and again!

I wandered into the shop and asked if they had any batteries for my alarm?

“No“ was the answer; “But if it’s your motorbike, try pushing it down the slope, it happens all the time, it’s the radio antenna!”

Well, I pushed Harls down the slope and yes there was a blasted great 100 metre tall radio mast right next to the service area, but no she still wouldn’t play nice. In fact she went even more peculiar on me. There were lights flashing all over the place and all sorts of previously unheard squawks emanated from her! 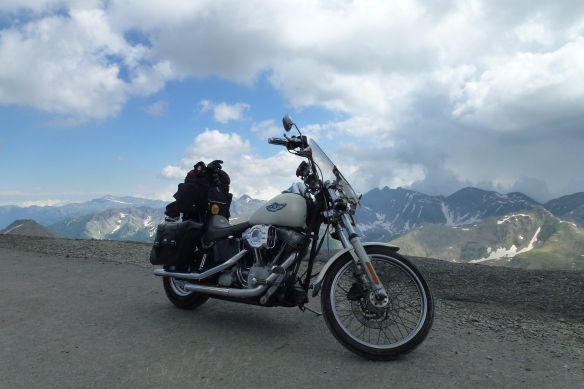 At times like these you need a friendly voice, so I called my good friends at Plymouth Harley Davidson back in the UK.

Luckily Dealer Principle Chris answered the phone and within a few minutes I was talking to Chief Technician Dave – this is Dave who loves Harls almost as much as I do and frequently threatens to take her from me if I don’t look after her!

We talked through the issue and Dave came up with some suggestions, which I went away to try.

I really appreciated the effort and support from those guys back at Plymouth Harley Davidson, it”s good to know that you have a friendly, helpful voice at the other end of the phone even if they are 1000 miles away!

Whilst I was scratching my head a car drew up and a chap got out who introduced himself as a local Harley rider.

“That m%#@e mast has got you brother!” he exclaimed, then went on to tell me that lots of local French Harley riders have had the same problem that I was experiencing.

Thanks, but how did they get out of it?

“On a truck!” – Not greatly encouraging…

Then another chap arrived on the scene. He’d been having lunch with his family and had seen my predicament. It turned out that he was an electronics engineer and had experienced similar problems throughout France.

His African-French accent was quite difficult to understand, but he told me that the French are not very good about thinking of the effects of either High-Tension power lines or Microwave Transmitters on other electronic devices when such things are built.

He came up with a suggestion to try with one of my key-fobs; take the power cells out of both and stack them than use a key to make the circuit, briefly press the button and see what would happen.

I suppose that the extra power was enough to override the interference; I don’t really care, I’m a mechanical engineer and although I understand electronics. They are a bit of a black art to me!

The funny thing was that for an hour and forty minutes I didn’t get worked up or cross; Trudie was holding my hand and Andy was trying to find a solution – I was not alone.

Then for the next 150 miles they rode with Harls and I, again.

5 thoughts on “Interference and Remembrance”