Some years ago, I’ve got to check exactly when and it may have been pre-blog days, I took Harls up Col de la Bonette.

We had a great time, but it was slightly tinged with a bit of sadness as we couldn’t quite reach the summit of Cime de la Bonette due to heavy snow.

That day I told Harls that I would bring her back and we would finally reach the summit together.

Call me bonkers if you like, but that motorbike has a personality and trust me, she understood.

I don’t think, therefore, it went down well with Harls when three years ago I took Baby Blue up to the summit before her! 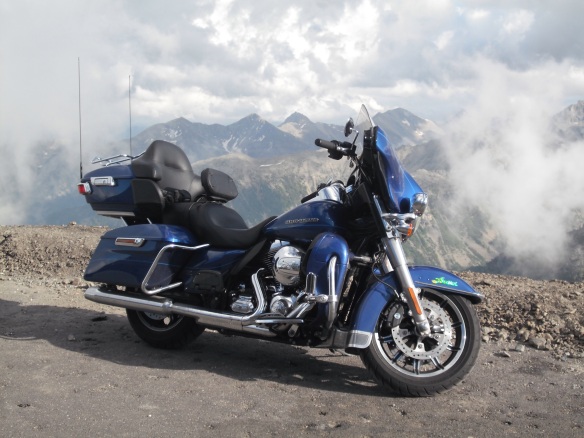 Cime de la Bonette is an interesting place and only in existence due to the wonderful attitude of the French people who saw an opportunity to make their mark on the map of Europe. For some reason the French were not content to just have the highest pass in Europe, Col de l’Iseran at 2770m/ 9087ft, they wanted to go one better and make a totally pointless loop around the adjacent mountain to Col de la Bonette and add 300m to the record!
I love the attitude, though if I had been a French tax-payer I don’t know if I would have been so enthusiastic!

La Bonette itself is a formidable place. From the South, the Nice side if you like, the climb is long and at times tedious, with numerous hairpins and tricky road surface. From the North, it’s one of my favourite alpine roads; sweeping ever upwards though delightful country in lovely geometric curves. You can really get into the groove on this climb, I love it!

On both sides though , as you near the top of the climb the scenery changes dramatically; you could be on the moon! The green high alp gives way to barren frost shattered rock, scree, tortured slates and mud stone.

On top of Europe!

It’s high, cold and sterile, even the delightful Marmots, clowns of the high alps, don’t bother going up here! Get caught on a bad day and you can be in serious trouble in a very short time indeed. Today though was benign.

With altitude Harls got sluggish and I must say that I was feeling it to, sea level to over 9000ft in one go hits you…!

We chugged our way to the summit and I kicked down her side stand.

I leant forward and patted her tank, “See, I told you we’d come back.”

This bike of mine is amazing and I’m probably boring you all stupid saying so, but honestly she is.

Then we dropped down into Jausiers and I swear that she ran better and truer than ever before on this trip; I kept my word and as a result, she’s happy!

Let it never be said that I am not a man of my word!

“Well its alright ridin’ around in the breeze, well it’s alright, if you live the life you please.”

3 thoughts on “Keeping My Word”