Let no-one tell you otherwise, riding a big old motorbike in the mountains is hard work!

I frequently smile as Sports and Adventure bike riders flick past Harls and I on those tight twisty mountain roads. True they are chopping along faster than us, but then they are on much lighter machines, with more powerful engines and definitely better brakes. Poor old Harls chugs along with her carburetor fitted engine and brakes that need treating with considerable respect, no ABS for us!

I smile because I wonder just what those other riders are taking in. Do they see the stunning scenery or those eagles soaring on a thermal, or are they more likely looking for the next braking point or overtake?

Each to their own I guess, but still I smile!

We kicked off this morning with a bit of a detour; the good folk of the Savoie region of France had closed part of our route for a bicycle event, but no problem – there were excellent alternatives! That’s the nice thing about La Route des Grande Alpes, there are actually alternative ways of doing it; I know, very French!

So let’s start with a little trundle up the North East side of Col de la Madeleine, 2000m/6561ft above sea level, this side was a new route for us and quite interesting. The last time I was on this Col was with Baby Blue and we rode up and back from the La Chambre side.

Today was different and much more enjoyable, though we were chased by a rain shower for the last 10km and just managed to stay ahead of it!

Then we had another choice and I settled for Col de la Croix de Fer 2067m/6781ft, from St Jean de Maurienne. Again this was a new route for us, though not the Col and wow, was I pleased with my choice! I wouldn’t say that it’s become my new favourite, but it’s well up there. The road winds ever upward, through delightful forest slopes, tiny villages, and a tightening valley, before bursting out above the tree line in a wide amphitheatre bounded by some of the most magnificent mountain sentinels one could wish for. 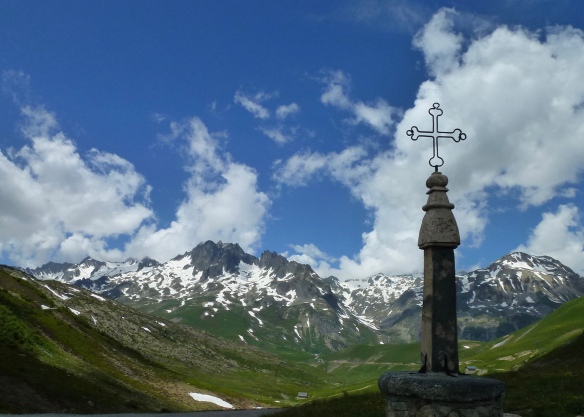 The Col itself is one of the most popular in the Alps, legendary in La Tour de France and easily accessible from nearby centres of population, so yes the top was busy; most people come up from the easier Grenoble side.

We slipped down to Col du Glandon, 1924m/6312ft, then followed the narrow valley back down to La Chambre for a quick blast to St Michel de Maurienne, where we turned right.

That moment of turning right onto the D902, the “proper” Route des Grande Alpes, was special; this was the road to Col du Galibier!

I once wrote about my love affair, because that’s exactly what it is, with the mythical Galibier. Check it out here.

Today we were going back, again. Galibier keeps calling me and I can’t help but answer her by returning.

First though was the small matter of Col du Télégraphe.

Now “C du T” is often seen by many people as a minor prelude to the main event of Galibier, I was once one of those folk. Wrong!

Col du Télégraphe deserves respect in it’s own right, the climb is 878 metres at an average gradient of 7.4% and starts from that point that we turned right in St Michel. What’s even better is that it could have been made for a Harley Davidson Softail such as Harls, the way that the road is engineered somehow seems to suit the old girl and we flew up.

This was no deep-down-dig-in grunt. This was snarling Harley thunder and “Let’s scrape a few bits on the tarmac round some of the bends” fun! I haven’t thrown the old girl around like that in years, well not with luggage on board anyway and y’know she encouraged me!

I didn’t bother stopping at Télégraphe, or “Le Col” which followed a few kilometres on; the call from Galibier was getting stronger!

At 2642m/8667ft, Col du Galibier is not only one of the big players in the Alps, but also the whole of Europe, it’s number 5 in the “All Europe” list of paved passes.

After the alpine resort of Valloire the D902 enters hardening scenery and as it leaves behind the bridge at Plan Lachat you’d better believe that this is a serious road in tough yet achingly beautiful country. 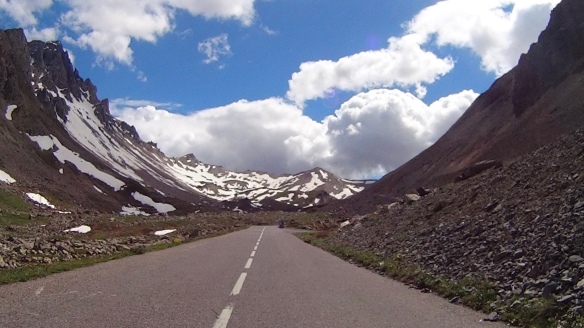 The last of the winter snow was evident everywhere, in fact the pass road was only opened a week ago. I was thankful for my helmet’s built in sun visor as the glare was a times very bright.

Over the last kilometre, tears were welling in my eyes; no I lie, they weren’t , they were running down my cheeks! And Harls, she had a little moment too, was that a bit of high altitude carburettor icing that made her catch her breath and cough or was she feeling the moment as well?

Harls and I were coming back to our spiritual home, again.

We pulled over at the summit and I took a moment to compose myself, Harls sat there with her engine tinkling contentedly as he cooled. 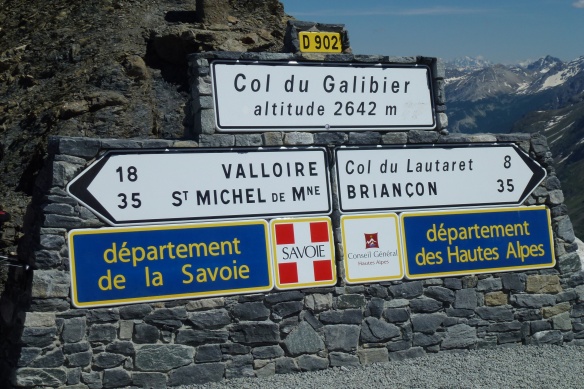 I find it hard to explain just what a hold that this mountain has on me, it’s real, very real and I wouldn’t change the feeling for anything.

We took in the scenery, looked to the sky and were just glad to be there for that moment.

At the touch of a button Harls coughed back into life, time to move on, but we’ll be back!

The mountains call us all…

…it’s just how you answer, that is the difference.

7 thoughts on “Tired, Emotionally Drained, but Oh So Happy!”