Motorcycle manufacturers are a funny bunch. By and large they stick to the tried and trusted, at least for those that they view as their dedicated customers.

Every now and then though one of the manufacturers produces something that is either so radical that it’s pure genius, or it leaves you pondering what on earth they were drinking or smoking when the new creation was first committed to paper!

On the “Genius” side a few that sprung to mind and from a quick trawl of the motorcycling Internet, we have:

In 1935, Italian marque Gilera shoehorned a transverse four-cylinder engine into a motorcycle frame, when just about everyone else was making two-cylinder machines.

1969 saw Honda produced the CB750, basically the first production superbike universally available and the first to have disc brakes and for me a real big step change. – But then I like Honda’s!

In 1980 it was the Kawasaki KZ1000 leading the way with fuel injection.

I’ve tried really hard to come up with big innovations that Harley Davidson has made….

Nope I can’t think of any, but to be fair the Harley Davidson Motorcycle Company do one thing very well indeed; they make bikes for specific customers, “Harley Customers.”

OK, I ignored the V-Rod muscle bike, which was made in partnership with Porsche and had a dual-overhead-cam 1131cc water-cooled engine; it didn’t really break any new motorcycle ground, but bear with me!

All of this is probably why when Harley Davidson does change something we all tend to rock on our heels a bit. A few years back H-D introduced the 103cubic inch engine and on Touring models included liquid cooling for engine; to be fair it was only for the exhaust valves, but still a bit radical for some Harley customers as unlike the V-Rod this was an engine in a mainstream bike, not a niche machine.

In 2016 the next new thing was the 107cubic inch “Milwaukee Eight” engine with four valves and two spark plugs per cylinder, oil cooling and fully counterbalanced; only the eighth “Big Twin” engine since 1909, Harley know how to live on the edge!

I had the opportunity to test ride one of the first “Milwaukee Eight” bikes, a Street Glide, back in October 2016, you can read about that here. 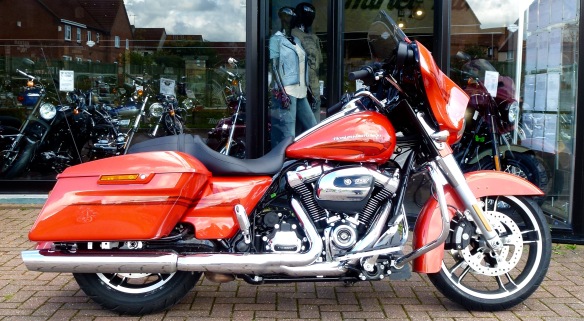 First impressions were that I liked the new engine, finding it very smooth and certainly not lacking in power, but it wasn’t really very special sitting in the frame of a big Street Glide!

Fast forward to the end of last summer and we hit the release season for 2018 bikes.

Harley Davidson did something, for them, that was radical, very radical!

When the 2018 models were announced a whole line had been deleted, the much-loved “Dyna” models were no more. In addition the “Softail” range were, well, different; actually they weren’t different; they were a whole new design.

Harley Davidson introduced the Softail frame in 1984 and designed it to look like the retro rigid-frame bikes so beloved of the custom school. The bikes had shock absorbers mounted underneath the gearbox and a clever swing-arm that absorbed bumps in the road.

Riders tend to be a bit polarised about Softails, you either love ‘em or hate ‘em; my beloved “Harls” is a Softail, so you can figure where I stand!

“Harls” all Softail, all motorcycle!

I must admit that early last Autumn I took a sly look at the H-D 2018 catalogue, the new models looked interesting and I made a mental note to investigate when I had time.

Then I went to the Motorcycle Live exhibition in Birmingham in late November.

Spinning round in the middle of the Harley Davidson stand was something that caught my eye…another new Softail model – The Sport Glide.

Now for the life of me I can’t figure out why Harley Davidson would, with a big fanfare, introduce a new line and produce all the glossy 2018 model catalogues only for a few weeks later to roll out another model of the line and one that wasn’t in the catalogue?

I’m mighty pleased that they did though!

There’s an old saying in engineering and design, “If something looks right, it probably is right.” To me the Sport Glide certainly ticks that box! 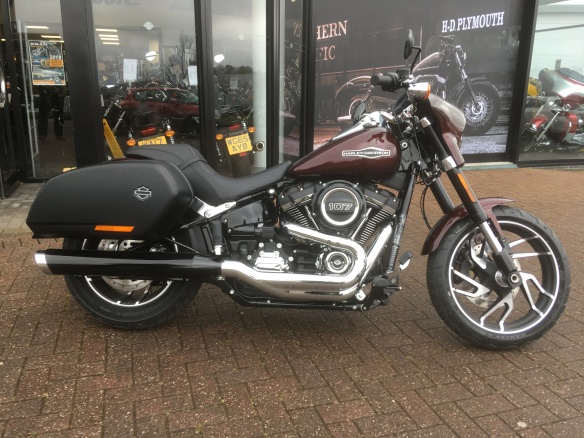 There was only one problem, the bike at the show was the only one in the UK and further supplies were not expected until January 2018, plus the total UK allocation was only around 250 bikes, Hmmm. I got in touch with my local Dealership, Plymouth Harley Davidson and issued strict instructions that when they got their hands on a Sport Glide to let me know!

Now the guys and girls at Plymouth Harley Davidson are a good bunch and sure enough at the end of January I got the call, a Sport Glide fitted with the 107 engine had arrived and was being prepared for the road – would I like to test it? Do Bears poo in the woods? Darn right I wanted to test it!

To add icing to the cake, it was suggested that I also try a different Softail model that was fitted with the 114cubic inch engine, just for comparison.

Those folk at Plymouth Harley Davidson must really like me, because on the day I turned up for my test session on two brand new bikes the weather was filthy, but “Hey, no problem Dookes go ride and enjoy!”

Now this isn’t the sort of bike that I would normally go for, a naked “Street Fighter,” but wow, was I glad that I did!
With it’s brutal lines I suspect that this bike is aimed at the younger end of the Harley market, but in my late fifties I don’t see many Harley riders younger than me; hey ho!
The 114 engine coughed into life and a deep aggressive growl emanated from the twin exhaust pipes, this already was sounding like fun!
The pipes are interesting 2 into one and back to 2, I’ve never seen that before, but the look great.
Up front is an LED headlight that looks straight out of Star Wars, really aggressive yet soo cool!
Throwing my leg over the bike and settling in the saddle it was surprisingly comfortable. I toed the shifter down, selected first gear and pulled away. The bike nimbly responded to the throttle and within a quarter of a mile I was already thinking to myself, “I like this…. a lot!”
I turned onto the nearby A38 trunk road and filtered into the mid-morning traffic. Once I had settled into the feel of the bike it was time to see what this bad boy could do. I gave a slight twist of the throttle and wow, in came the power accompanied by a deep throaty roar from that fancy exhaust system; my smile became a big stupid grin!

Actually the power delivery was, to be honest, a tad too aggressive on the greasy wet road and with no traction control I had to be a bit careful not to have the back-end misbehaving, but hey I guess that is what this bike is all about.
Turning off the trunk road and onto some twisties, I was very pleased to feel how nimble the bike was through corners, even with that big fat front tyre. It’s brakes are
Good, with twin front discs and ABS as standard, it’s shame that they are not linked to the back ones though in my opinion.
Then we get to the ride, oh my, it’s a dream. That new Softail chassis is sublime!

Riding back into the dealership it was time to swap, the Sport Glide was outside waiting for me.

At first glance the difference between the two bikes is like chalk and cheese, but that’s only a veneer. Underneath, apart from the Sport Glide having a 107cubic inch engine they are pretty much the same bike.
The exhaust is a straightforward 2 into 1 and the front wheel has only one brake disk. It’s got a small “bikini” faring and a pair of medium-sized hard panniers, all of which can be quickly detached if wanted. I found the small faring quite adequate at diverting the wind off my chest, but if I ever own one I’d probably swap the standard 1.5” screen for the alternative 5.5” option.
Performance wise it’s another gem, though unlike the 114, the power delivery is much more precise and enjoyable. Which also means that you are not so likely to get stung by the lack of traction control! Now please don’t think that the 107 is lacking in power, oh no not at all, it’s got plenty of grunt but just delivers it in a more refined way.
I do feel that only having a single brake disc on the front wheel is not the greatest idea from Harley Davidson on a bike that weighs in at around 330kg.
Cornering on this little beauty was lovely, even better than the Fat Bob, though with a lean angle of only 27º before the pegs start to hit tarmac, you do have to be a bit careful!
The Sport Glide, like the Fat Bob has a six-speed gearbox. The front suspension is non-adjustable, whilst the rear now has a spring pre-load adjustable shock. 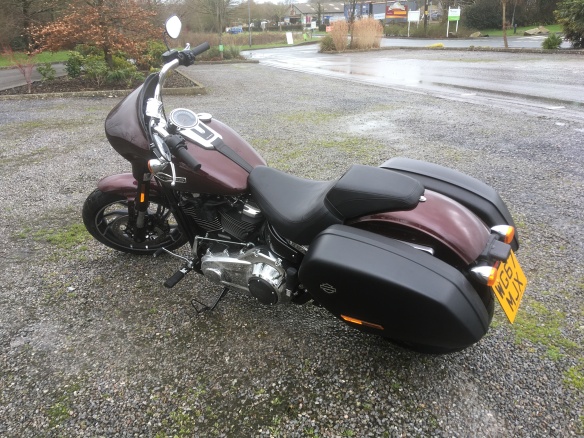 If you are like me, a dedicated touring motorcyclist, you’ll like the new Holdfast detachable latch system that Harley has fitted to this machine. I allows you to easily quickly add a Tour-Pak top box and other touring type accessories.

So there we are, two very different, yet essentially very similar motorcycles.

I really couldn’t tell you which one I liked most; they both have a certain “Wow” factor and both for different reasons.

Looking back on the test ride and with the benefit of a few days to mull it over, I think I’d probably have to go for the Sport Glide.

Why? Well, as sexy and bonkers that the Fat Bob is, I think I’d get fed-up with it after a while. It reminds me of a big black horse I once owned; sure you could ride him all day and have the time of your life, but drop your guard for one second and he’d take over; these days I like things to be a tad more relaxed!

On reflection though, I really believe that Harley Davidson have, at last, produced something different from their norm and will probably reap the benefit for doing that. Could we not have linked brakes and twin front discs right across the range, even as an option please?

With thanks to all at Plymouth Harley Davidson for making the two bikes available and not being too upset when I brought them back absolutely filthy!

“Get you motor runnin’ head out on the highway”