I often think that my life is full of departures, never any arrivals, always in motion and moving on.

Take this morning for example. Sure I’d enjoyed staying in Ritten, but loading up Harls and firing her engine into life, then moving back on the open road; I was never happier.

We hit the Bolzano morning commute traffic right at its peak. It was total fun, street-fighting on level terms with the Italians, Harls growling around the city like she owned the place; I could never have done that with the big Ultra Limited! Then it was a spirited romp along the autostrada to Merano, where predictably everything ground to a halt as the road slimmed down to a normal highway.

On Italian roads you have to get your head around one thing, they are either mad all-out racetracks or you need to predict your arrival by the calendar – all or nothing, that’s just the way it is. Being honest, I put up with the tedium of stop-start traffic for about ten miles before I hit the “Stuff this, I’m on a motorbike” button and started, shall we say, “making progress!”

The weather forecast for the weekend ahead is rubbish. I had planned to spend two nights in Livigno and catch up on some of the local passes, but with snow due tomorrow afternoon and right through the weekend, I’ve pulled the plug on that idea. Instead we are only here for one night and then running away from the weather, before we get snowed in.

As a result, I changed the route for today. I was going to ride Passo Di Gavia from the South and have a play elsewhere tomorrow. Instead we headed into the Mustair valley and at Santa Maria turned left onto the Umbrail pass route. This is a narrow, little used back door road up to the (in)famous Stelvio Pass and until only a couple of years ago was not asphalted throughout. I knew it was narrow, so last year with Big Baby Blue I avoided it; good move, as after riding it today I don’t think I would have got Blue up it! For a large part of the route it climbs up through delightful forest, but of course the disadvantage is that there is no view, only road and trees. Until you hit altitude, but today that was up in the clouds.

The road is very narrow in places and some of the bends a tad tricky. After our exertions of yesterday I found that my dodgy left shoulder, locked up; I have an impingement in the thing and as usual it chose a good time to play silly! What it meant in simple terms was that I couldn’t move my arm far enough forward to push the handlebars through tight right-hand bends.

Time for a rethink, as I was riding like a muppet!

I stopped and did some stretching exercises, took a couple of painkillers, had a drink of water, ate some fruit whilst the pills kicked in and then got on with it! It didn’t half hurt, but at least we got going and soon were back into the swing of things. I got pretty good at going round hairpins one-handed too!

Not bad, one hand!

Soon we got into the clouds, then it began to get really windy and predictably the temperature plummeted to a little over zero. I was every pleased to have brought my heated jacket – doh, heated jacket! Turn up the heat nice and high and “Ping” the shoulder was feeling nearly normal; my heated gloves were nice to!

We paused to grab a photo at the standardly deserted Swiss customs post on the Umbrail Pass border and roared back into Italy. Ciao Italia! – We missed you for the last 30 miles. 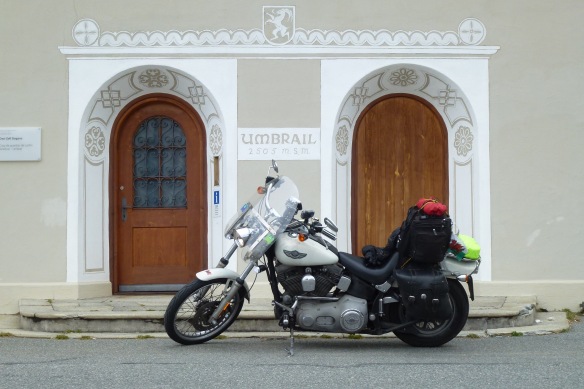 On the border, anything Blue can do, I can do better! 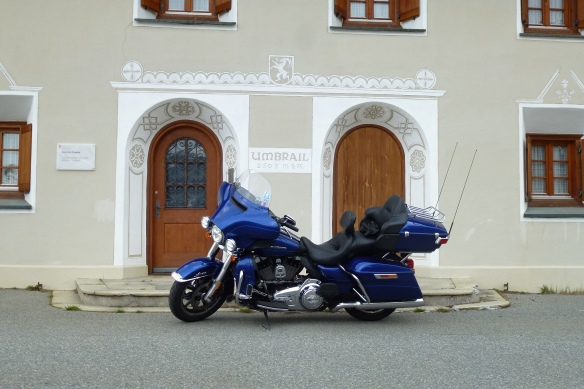 Just after the fronter we turned left and knocked off the last half-dozen hairpins to Passo dello Stelvio. Umbrail is at 2503m/8212ft, Stelvio 2757m/9046ft, poor Harls with her simple carburetor was running very rich through lack of oxygen at these altitudes!

Looking East on the top of Stelvio.

I’ve said it before, I find the top of Stevio tacky, but today was about proving a point to the big lump of a mountain. I’ve beaten you now with both my bikes!

Harls on Stelvio, a touch of class amongst all that is tacky!

The top was fairly busy, very cold and with a bit of snow in the air, so after a quick look around and grabbing a bratwurst for lunch, we headed down into Bormio and then on towards Livigno. Knocking off Passo Foscagno 2281m/7517ft and Passo d’Eira 2208m/7244ft on the way. 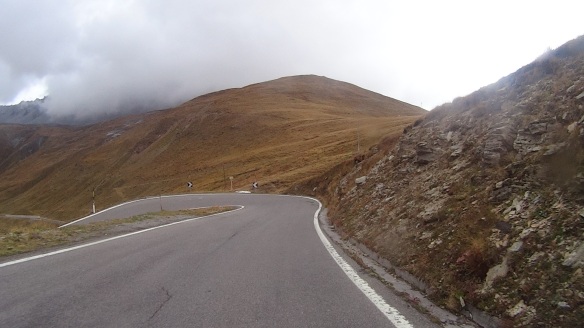 Gnocchi and pizza for supper tonight!

I can’t eulogise enough how much I enjoyed riding my Harls up that mountain today. I feel that, despite taking Big Blue up there last year, I can now fully exorcise that beastie that was Stelvio.

Harls came, growled her contempt and kicked it just where it counted and I had the ride of my life!

“Been down one time
Been down two times
I’m never going back again.”