I can almost hear Mrs Dookes saying that when she gets to see some of the photos in this post!

Let me put the record straight before anyone jumps to conclusions about my sanity; I’m not reckless, but sometimes circumstances develop that you just have to deal with and today was one of those.

I woke to wonderful alpine rain, just like yesterday really…except this wasn’t as heavy and there was no wind driving it. There was quite a bit of hanging cloud but Wet is still Wet though!

Checking out of my hotel in Gaschurn, I had a conversation with the receptionist about, yep, the weather and local road conditions. It’s always good to check out what the locals think.

I wanted to ride the Silvretta High Alpine Road, but I didn’t want it to become either an ordeal or dangerous.

The local view was that it would be fine, if a tad cloudy, “ein bisschen bewölkt!” There was the rider, to speak to the staff at the toll booth…

It was turn right from the car park then. Harls seemed happy enough; she’d spent the night in the underground car park and had dried out nicely, her two cylinders burst into life at the first turn of the crankshaft and she sat burbling away nicely, eager for the off. Or do I give that motorbike too much personality credit?

Off we set; the rain had eased enough that I could actually see where I was going, which after yesterday was a bonus. In addition the road surface was delightful!

After a few short miles we arrived at the toll booth and I coughed up the required €12, but just as I was getting my ticket, a car came down the hill covered in snow! I made a comment about this to the toll collector who said that it was ok, the road was clear! Leap of faith time then, let’s go… 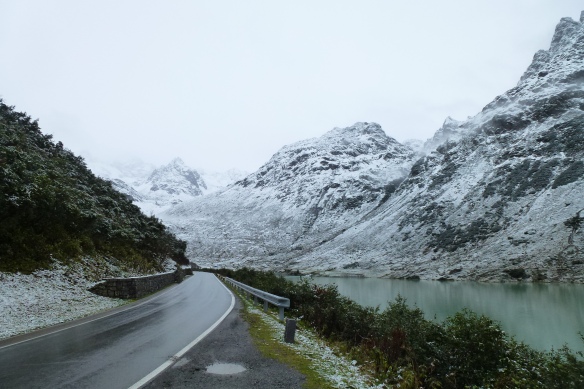 The Silvretta Hochalpenstraße, High Alpine Road, is considered one of the most beautiful panoramic roads in the Austrian Alps. It’s just over 22km long and on the West side has 34 hairpins up to the 2,032m/6795feet Bielerhöhe Pass. We were attacking it from the West, tasty!

Originally the road was constructed to assist the construction of a hydro-electric scheme and dam, after the project was completed somebody thought that it would be a good idea to keep the road and open it to the public, I don’t know who that was, but I like them! 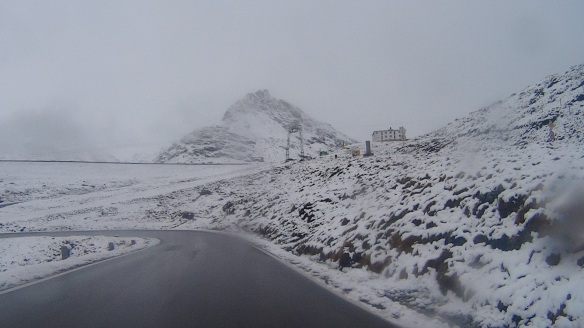 Like a lot of alpine roads there’s no mucking about, the climb started almost straight away, just round a bend from the toll booth and “Bang,” welcome to the mountain. Up we went and then the bends started, we were nicely getting into the swing of things when around one of the hairpins we caught up a coach. At first I cursed the thing, particularly as the driver insisted on staying in the middle of the road, no surprise there it was a Swiss coach! Just as I was starting to get a bit impatient about passing this bus, we rode into falling snow and things suddenly got “interesting.”

The bus, that only a turn or two earlier had been a pain, now became very useful. I could ride behind, take my own line through the corners and not have to worry about any oncoming traffic as they were pulling aside to let the bus through! Neat eh? As we got higher the snow got heavier, but with each numbered hairpin passing by I just kept the old girl ticking over and we carefully negotiated the climb. 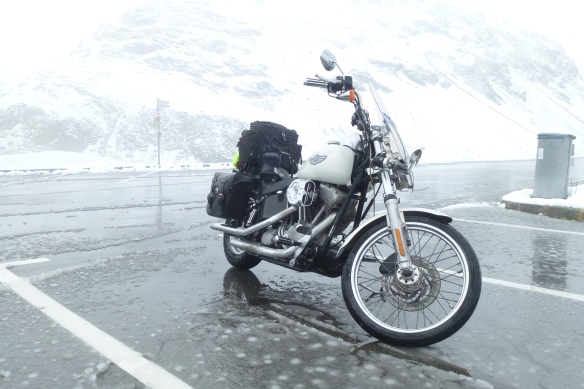 At the summit we pulled into the car park adjacent to the dam and literally slid to a stand. It did cross my mind that I’m getting too old for all this adrenaline pumping excitement, it only lasted a second though, then I thought …”nah, bring it on!”

Ok, I know that there will be some folk with “Adventure” type bikes reading this and slightly scoffing. Yep, I suppose with your knobbly tyres and “ride on the pegs” approach this little ride would have presented no problem at all, but this is a Harley cruiser we are on, it’s different, very different!

In the way of things these days, the summit has a hotel, restaurant, visitor centre and gift-shop, but hey you can’t pass up the opportunity to use a high altitude loo, can you? 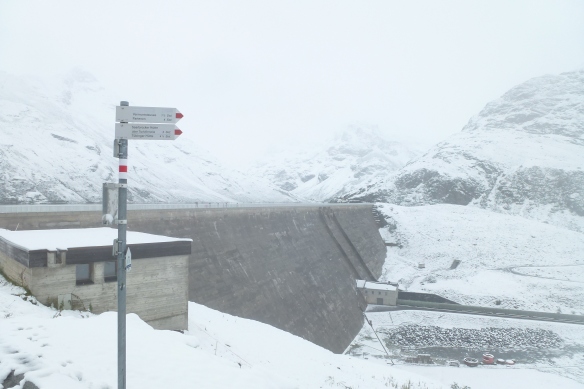 Photos taken, souvenirs purchased and Harls checked over, I started her up and headed on down the Eastern side. We dropped out of the snow pretty quickly, it’s to do with the foehn effect, which I tell you about in another post.

I had thought about riding into Italy via the Timmelsjoch Alpine road, but as this is at 2,474m/8,117ft a fair bit higher than the Silvretta, I exercised caution and chose the Reschen Pass route, which is a mere 1504m/4934ft. Unfortunately, so had most of the other traffic in Austria, Italy and Switzerland and then it rained again.

Just over the top of the pass is the village of The village of Reschen. In 1950 a reservoir was built that flooded part of the old village, all that remains is the bell tower of the old church that rises defiantly from the water. I quite like that. 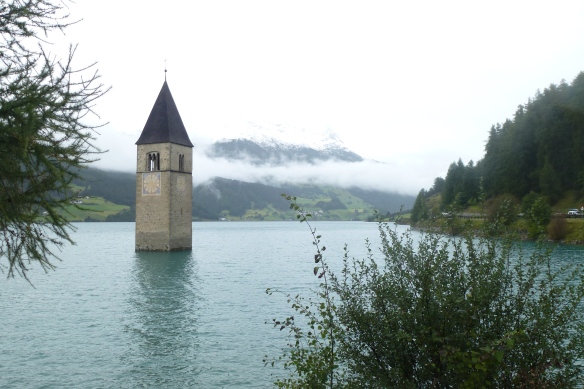 Dropping down from Reschen would have been great, it’s a brilliant engineered road, but today it was choked with traffic. Further on, near Merano, things really did grind to a halt. It took half an hour to cover four kilometres and half of that was in a tunnel, even more reason to hate tunnels; it was hot, smelly, slippery, fume filled and noisy, but we survived! No chance of a cheeky bit of motorcycle filtering there today either.

Then after a nice blast down the Autostrada to Bolzano, we had another bit of climbing and hairpins to enjoy on the road up to Ritten, where we are staying for a few nights. More about that later, but wow, that road up from Bolzano was fantastic and as its local I’ll be doing it again and again, and maybe once more!