Many countries around the world have ancient monuments, sites of great historic interest and significance. On my travels I like to look in on some of these places, but it’s strange it’s always the ones closest to home that you overlook or put off to “some other day.”

On a gin clear late autumn morning last week, I fired up Baby Blue’s engine, turned East from Dookes H.Q., rode 150 miles on the road and back 5000 years in time. 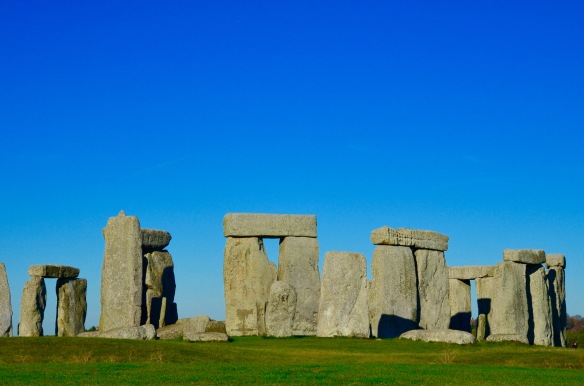 One of the world’s most famous prehistoric monuments, Stonehenge has been acknowledged by the United Nations as a World Heritage Site of International importance. Archeological research suggests that it was built in several stages: the first monument was an early henge monument, consisting of banks and ditches started about 5,000BC. That’s 2500 years before the Great Pyramid in Egypt! The impressive stone circle that is the quintessential image of Stonehenge was erected in the late Neolithic period about 2500 BC. Many burial mounds were built nearby in the late Bronze Age, around 800BC, and dot the landscape around the monument to the present day. 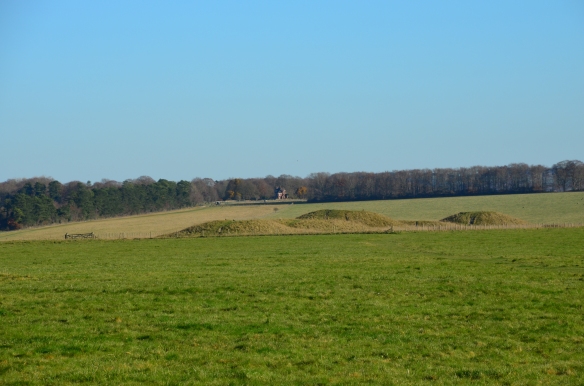 Round Barrow Burial Mounds near Stonehenge

Stonehenge lies on Salisbury Plain, a chalk plateau in Central Southern England that covers over 300 square miles and is renowned for its rich archeological heritage. Even today it is sparsely populated, a combination of its worth as agricultural land and also use by the military for training purposes. As an aside my Grandfather Charles spent much of his early Army service with the Royal Horse Artillery training on the Plain, before heading off to the horrors of the Western Front in 1915. The Plain is also a special place for wildlife, with two national nature reserves, many rare plants and a haven for wild mammals and birds. 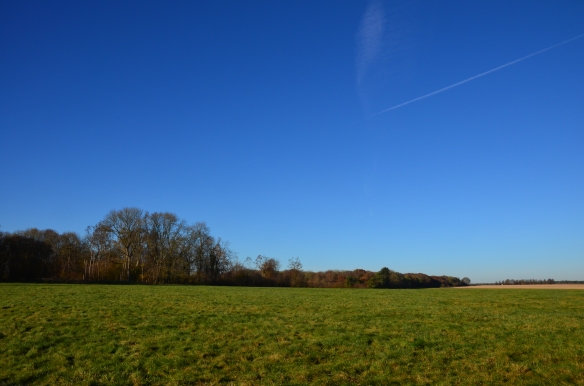 Now let me be clear, I’m no archeologist, but I do have a massive interest in all things ancient. The reason I am saying this dear reader, is because there are many more detailed explanations that have been written about Stonehenge by far more qualified folk than I! So what follows is my take on the place…if you want more detailed stuff, well it’s out there in all different forms.

A fantastic new visitor centre was built in 2014 and stands about a mile and a half from the stones, where a superb exhibition tells the story of the monument through displays of excavated artefacts, photographs and diagrams. I thought it was very well done. 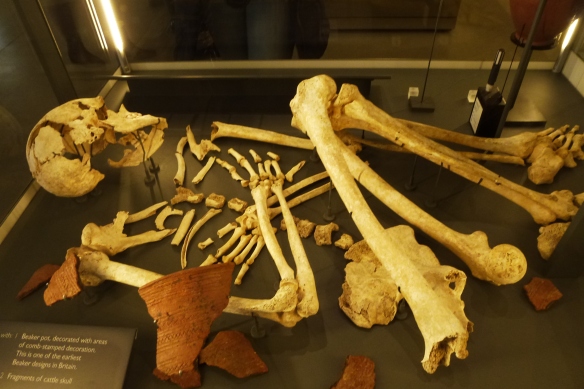 You can park at the visitor centre and catch frequent shuttle buses to the monument or enjoy the walk across the Plain, taking in some of the other surrounding archeology and delightful woodland as I did. Actually after 150 miles of riding I was ready to stretch my legs!

I first visited the stones as a young lad, many years ago. In those days the public were free to wander amongst the stones and touch them as you tried to make sense of it all. Unfortunately, people then started to chip lumps off as souvenirs and the increased footfall of ever more visitors began to erode the delicate archeology. Since 1977 visitors are no longer able to touch the stones, but are allowed to walk around the monument and through the henge ditch, however on the two Solstice days plus the spring and autumn equinox access is briefly permitted. 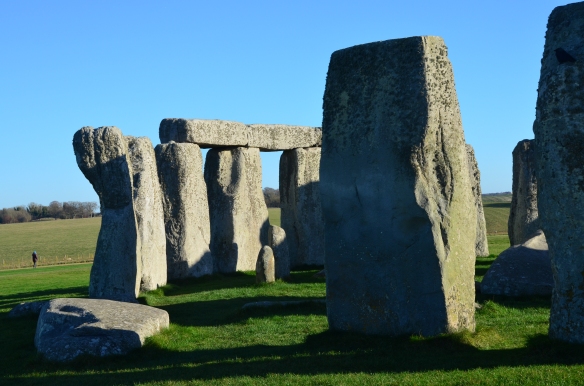 Exactly what function Stonehenge had in ancient times remains a mystery, indeed it may have had several uses. Hypotheses range from ancestor worship, celestial calendar, a place of healing or simply a place of the dead, a funerary monument if you like. The modern thinking on the reason for Stonehenge is that it was first built as a place of burial. Cremated remains of 63 individuals were excavated in 2013 and carbon dated to around 3000BC, it appears that at this time the standing stones that we know today were beginning to be erected and this is where things start to get very interesting. 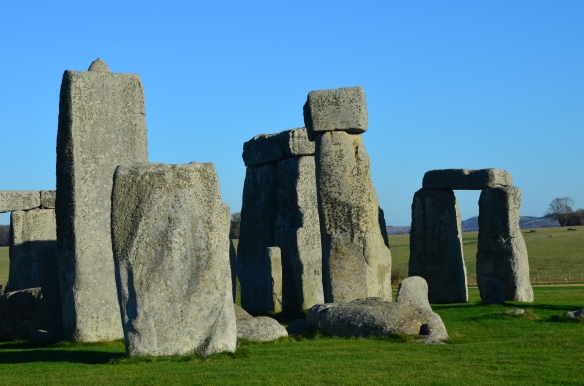 There are two types of stone found in the monument; Bluestones and Sarsens.

The first to appear were 80 Bluestones, of which only 43 remain today. These monoliths are about two metres high, about one metre wide and 0.8 metre thick, each one weighs about two tons. Now the really fascinating thing is that this type of stone, a variety of igneous dolerite, is only found 150 miles away in the Preseli Hills of South Wales…So how to goodness did they get to Stonehenge?

About 2000 years after the Bluestones were erected, the ring of 30 Saracens with their lintels resting on top made their appearance. Now these fellas really put things into ever greater perspective! Each stone is around 4.1 metres high, 2.1 metres wide and 1.8 metres deep, oh yes and they weigh about 25 tons! 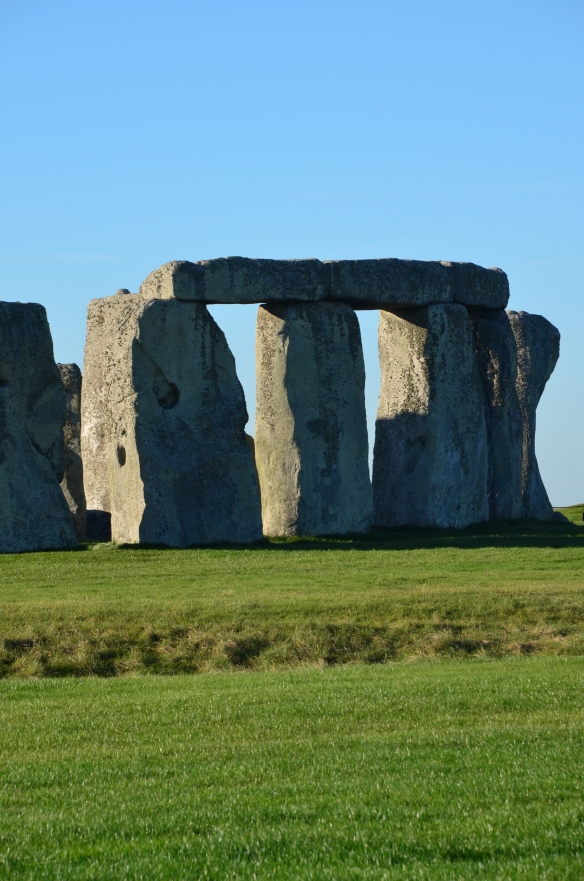 Part of the Sarsen ring.

Inside the Sarsen ring stood five trilithons, two large sarsens with a third one set across the top, in a horse shoe shape.

Putting the all the other stones to shame, these behemoths weigh up to 50 tons each, the largest stood 7.3 metres tall with another 2.4 metres buried in the ground. These stones appear to have been transported from a quarry that was 25 miles to the North of Stonehenge…even so, just consider moving and erecting one of these mammoths with nothing other than manpower!

The whole site and specifically the trilithons and heel stone, which lies outside the main circle, are aligned to the position of the sun on the solstice. 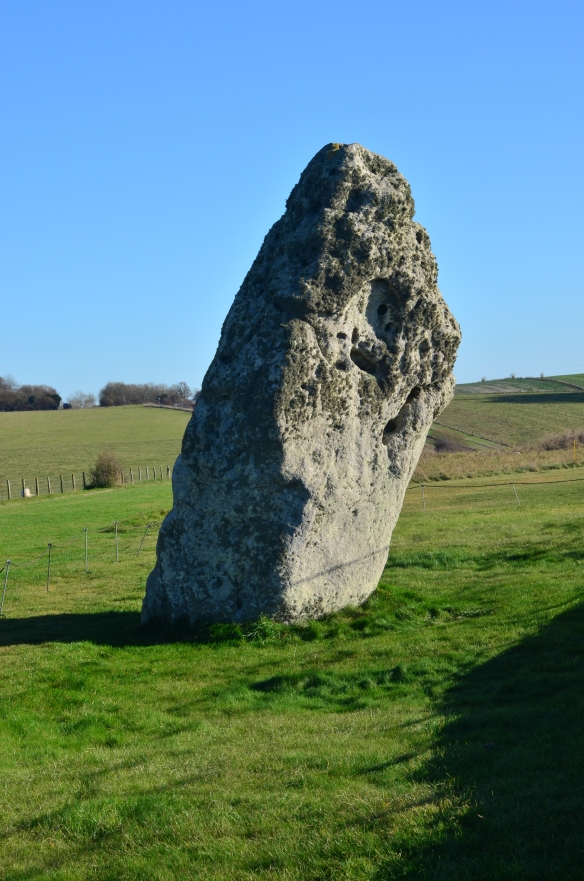 The Heel Stone, on the Midsummer Solstice the sun rises over this point.

On the winter solstice the sun sets over the alignment and in the summer the sun rises in line with the stones. 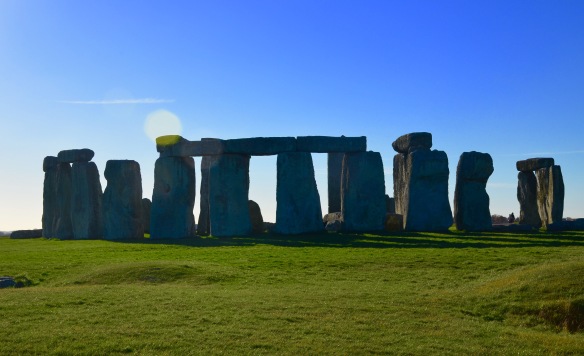 Looking along the Midwinter Solstice line from the Heel Stone.

I spent a couple of hours wandering around looking at the monument, taking photographs, reading the various interpretation panels, listening to the free audio guide and generally really enjoying myself getting to know the place again. 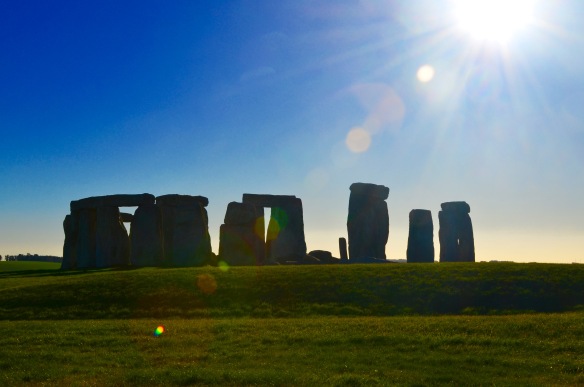 I took the shuttle bus back to the visitor centre and enjoyed a very pleasant lunch in the café/restaurant, after a quick look around the impressive souvenir shop.

Soon it was time to head back West towards home. I pointed “Baby” into the setting sun, we hit the road and basked in the freedom that only two wheels can give! 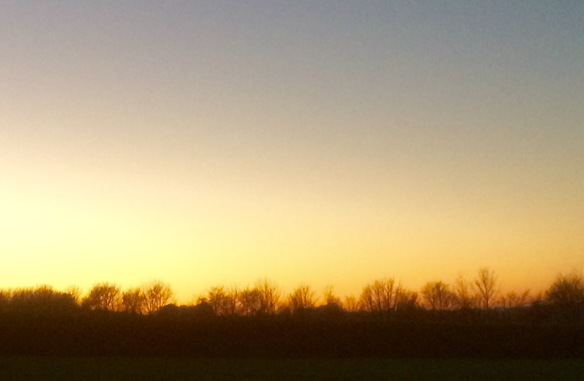 West, into the setting sun.

The air was certainly beginning to turn cool by the time we got back to Cornwall, but heated gloves, jacket and handlebar grips kept me snug over the miles.

What a simply brilliant day we had!

I’ve got to admit that as I rode back, I couldn’t help but keep thinking of the hilarious lyrics of Spinal Tap…

“No one knows who they were or what they were doing,
but their legacy remains
hewn in the living rock…of Stonehenge”

Admission to the monument, including free shuttle bus and the visitor centre exhibition costs £15.50 for adults and £9.30 for children, with a family ticket (2 adults and up to 3 children) £40.30. Best value is to buy English Heritage Annual Membership for a family (2 adults and up to 12 children) £92.50 or £52 for an individual adult. Concessions also available. This gives you unlimited access to over 400 historic places for a whole year. For Overseas Visitors EH offer passes that are valid for either 9 or 16 days. Family Overseas Visitors Pass (2 adults and up to 4 children) costs are £57 or £66 respectively. So you don’t need to visit many places before you start saving money and you can keep going back as often as you like!