Just recently it’s all been bit strange in the world of Dookes. In many ways everything in my life has ben well sorted, ordered and under control, which for an untidy sod like me is a bit of a minor miracle!

Then along come the curved balls, you know those things over which we have absolutely no control and things go, well, crazy!

I don’t know if it’s a function of getting older, or if because I have more time these days to think about the little things, but sometimes I do feel like I’m trying to swim against a tide of treacle!

Now don’t worry, I’m not slipping into any sort of depression, nor am I unburdening by way of the Internet, but at times when the world really all seems stupid I’m so glad of my two-wheeled friends.

Regular blogonaughts know of my mate G’s ongoing battle with cancer. I’ve come to hate that bloody condition, not just for the dirty way that it attacks and eats people, but also and probably more so, the effect it’s pernicious tendrils have on the people surrounding it’s victim.

Just lately G hasn’t been at all good. Because his immune system is being attacked by the cancer he is extremely susceptible and vulnerable to all types of infections; the sort that healthy people can shrug off with a couple of over the counter tablets could easily kill him. Unfortunately my pal has picked up a couple of these infections and has been spending quite a bit of time in hospital plugged into IV antibiotics, morphine and a cocktail of other drugs.

To make his discomfort complete his larynx has been damaged by the chemotherapy and he can’t talk.

Earlier this week he was feeling a bit better and was desperate to get out for a bit of two-wheeled therapy. We tentatively arranged a meet up for yesterday and we were both looking forward to sharing some quality time together on our motorbikes.

Then came the bombshell; G had developed a temperature, quite a high temperature at that. His wonky immune system seems to only kick in a temperature when he’s really ill and then it goes bonkers. In addition he’d developed raging ear ache and totally lost his appetite, yep my pal was on his way back into hospital again; back to isolation and no visitors except his immediate family, back to that IV drip as well.

It’s strange, I felt numb about the whole situation and needed to find some space to get my head around things. I’d arranged to ride out with G, so the best thing to do seemed to ride out for him now!

As I pushed Baby out of the workshop I resolved to ride steady, ride to savour the day and ride to park things out on the highway.

It didn’t take long before the deep roar of Baby’s engine and the rumble of the road beneath us had me smiling again, bikes do that to me!

I decided to loop around the West of our neighbouring county of Devon, where the gentle and beautiful scenery always seems to welcome me. I stuck to secondary roads, I didn’t want the hassle of too much traffic getting in the way. Passing through small towns like Okehampton, Halwill Junction and Holsworthy life was definitely beginning to look a whole lot better.

I stopped for a coffee and exchanged text messages with G. I didn’t dare tell him I was out riding and when he reads this I’ll be in deep s**t!

Setting off for home my mind travelled back to just over a year ago, before G was diagnosed with leukaemia. We rode the same route together one evening and in my mind I could see him in front of me on his beloved little Triumph Bonneville, flicking the bike through the bends with consummate ease and trying to out-run my bike’s superior power on the straights. What fun we had that evening.

Passing back into my county of Cornwall I paused at the wonderfully named New Bridge, which I suppose it was once but as it dates from 1504 I think that must have been a long time ago! The River Tamar marks much of the boundary between the two counties and at this spot it is beginning to meander in its wide lush valley, just the spot for a bit of quiet contemplation and time to be grateful for many special things. 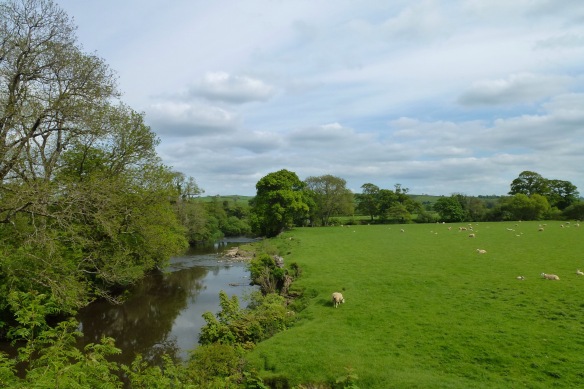 I mounted up and twenty minutes later was home at Dookes H.Q..

Swimming against a tide of treacle is hard work, but just occasionally you get to surf a little roller and things can start to look up a bit!

Oh yes, the “Ice in my Morphine” comment came from G when I told him to take more ice in his whisky to bring his temperature down! G thought that it would do more good in his painkiller!!!

6 thoughts on “Ice in my Morphine.”