After my splendid petit déjeuner Baby Harls and I hit the road around nine thirty. The day was warming up nicely, this was going to be a bit of a hot one, in more ways than one!

We had a tad of nonsense getting round Bourges, I think someone in the local highway department had a sense of humour when the town’s bypass was named “Rocade Jacques Bastard,” it certainly is a bit of one!  Anyway, we slotted onto the N151 with a bit of trepidation, you see I’d been along this road before in a car with Mrs Dookes and it wasn’t the greatest trip. Today though, was so different. Light traffic, ok there was almost none and lovely sunshine.

The road is pretty straight, the Romans were here a few thousand years ago, so we sang our Twin Cylinder song and purred East across the Cher Plain, this is the bread basket of France, wheat, barley and rape fields fill the land. I couldn’t resist trying to grab a “Big Sky” shot like Dhama Anchor  http://dharmaanchor.com does so well around Route 66.

I think that worked pretty well!

Dropping gently into the Loire valley and crossing the mighty river at La Charité we negotiated the narrow streets through historic buildings that even predate me! From Charité the road turns slightly North East and heads into Burgundy/Bourgogn, it’s still Roman so still pretty straight. Bourgogne is lovely, especially the Morvan part of which we passed through.

Clemency was were we crossed the River Yonne and shortly after the road became delightfully twisty winding through the Maulay Forest to the magical  hill top town of Vézelay. The town and the famous 11th century Romanesque Basilica of St Magdelene are designated UNESCO World Heritage sites, Mrs D and I visited in October a few years back and it was delightful; rather more tourists around today though! 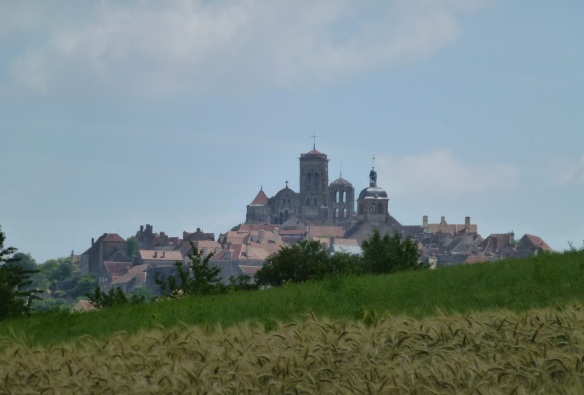 It looked great across the fields.

From Avallon it was back on the Autoroutes I’m afraid! The first one was the worse, the A6, the infamous Route du Soliel. The motorway is the favourite of Parisienne holidaymakers as it is the main link to the South of France and the French Riviera. Notorious for traffic jams and accidents in the high holiday season, it’s reputation is well deserved and you certainly need to keep your wits about you! Once on the A36 we crossed the Saône and the traffic quietened down nicely, this is a super Autoroute with interesting bends and nice changes in gradient, enough to keep it interesting.

. . . and so into Mulhouse, our stop for tonight. Not as plush as yesterday, but chosen for a reason and more of that tomorrow!

Catch you later and in the meantime,

“Don’t let the sound of your own wheels drive you crazy.”

2 thoughts on “Across the Rivers and Plains”