I don’t quite know what it is, but these days I find myself trying to put the brakes on the ever crazy speed that we try to live life in the “Western World.”

This morning was a good example. As I set out on my twenty-mile commute, sans Harley I’m afraid, across Bodmin Moor the sun was just beginning to claw itself above the hills, kissing the landscape with its golden light.

Time to pull over and take in the moment, the office can wait for a few minutes!

Colliford Lake glints like a shard of liquid silver in the half-light. 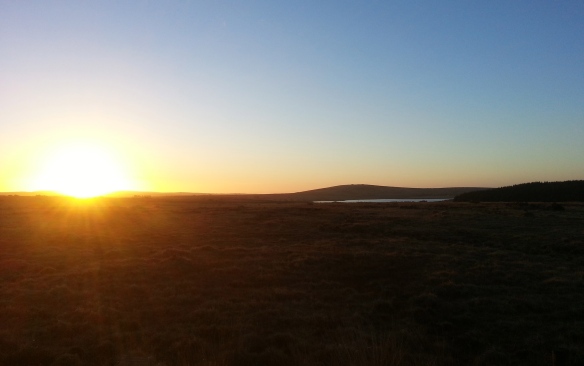 Looking North, Rough Tor on the left and Brown Willy to the right, the highest points in Cornwall.

Notice how the cloud is being pushed out of shape by the air moving over the hills? This is a meteorological phenomena know as “The Brown Willy Effect.” In simple terms it occurs when warm moist air from the Atlantic Ocean blows over the hills of Bodmin Moor and is lifted by the altitude of the surrounding topography; this causes the moisture to condense and brings more rain to Cornwall than other parts of England… and that’s saying something! Nice to capture it in a photo without it raining!

Then it was time to move on, after one more deep breath of the fresh moorland air.

“I’ve looked at clouds from both sides now…”

6 thoughts on “A New Day and The Brown Willy Effect!”