Had a nice cruise from Vierzon to Chateaubriant, now we are officially in Brittany, just. Most of the way we have been on the Péage, which was delightfully empty, is super smooth and as nice a motorway as you can ever expect.

Before we left the ‘normal’ roads we passed through about 15 miles of delightful countryside and stereotypical French villages and I got me thinking. I mused how France is changing, not by much but a change is definitely occurring. I suppose that it’s just natural evolution, but these days perhaps it globalisation and a sign how the world is shrinking. Bearing in mind that over 90% of Les Français now live in towns and cities the swing is inevitable.

Some of the places that I venture to are still home to the group of old men who play boules in the centre of the village at the same time every week. The old women are still there sitting in doorways watching the world pass by their gaze and occasionally you’ll still see a labouring Citroën Deux Cheveux being used for goodness knows what sort of load carrying! But these sights are getting as rare as a wiff of Disque Blue cigarettes and the 2 CV these days is more likely to be a treasured classic only taken out on very special occasions!

That old France, if you like the stereotype, does still exist, you have to know where and how to look for it and like I said it is evolving.

The French are still a nation of values, family is still the most important thing and work is not to be the most defining thing in people’s lives. Sunday shopping is still very rare in France, not because the French don’t want it, more they don’t feel that they need it and identifying that is quite defining and what’s makes us Brits so different from our French cousins! You see the French view is that they don’t want to work on a Sunday, so why should anyone else have to just to pander to someone else’s whim to go shopping…there are after all six other days in the week!

Likewise, our French cousins take a two hour lunch break and so do the shops, same principle as Sunday my friends, the shops and most offices are however, often open to seven pm!

It’s also apparent in French politics, the people let the politicians have their head and then once they are fed up with them it’s death by ballot box, true democracy, none of your petty name calling like at Westminster!

Which makes me ponder further about the British relationship with Europe in general, would the British people really be worse off living life a bit more like our Continental cousins? Or is it that our political and economic powers are afraid of a six day week, real lunch breaks and a more laid back lifestyle…cos the people with the most money would end up making a bit less out of the labours of others?

Only this week has the Frence Government been forced to drop the idea of an Ecotax system using cameras to record vehicle license numbers on the motorways, the People simply set fire to the very expensive camera systems and good for them!

Now you see what France does, subtly it turns you socialist and in the best possible taste as well! As my French friends say “Plus ça change!”

Now back to the biking. Just had lunch in Chateaubriant which is a bustling town that I came through by accident some time back and now can hardly keep away from! This is the Chateau. 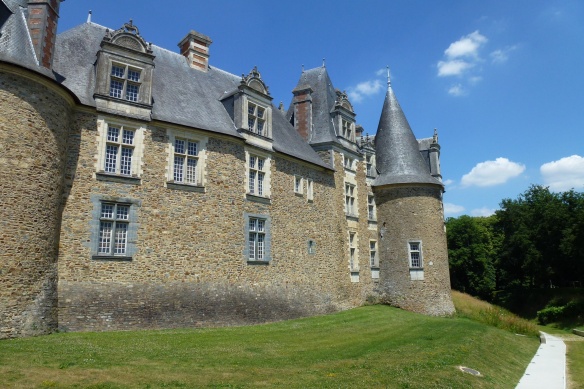