At the summit of Ventoux the temperature was naturally cooler, there’s a clue in the name, vent = wind in French, it’s an altitude thing you know! Dropping into Malaucene it had soared.

We turned north to Nyon and picked up the gorge of the River Eygues, which closes in to spectacular vertical cliffs around St May.

We took a breather and enjoyed a leisurely late lunch, more local fruit, in the cool of the gorge. 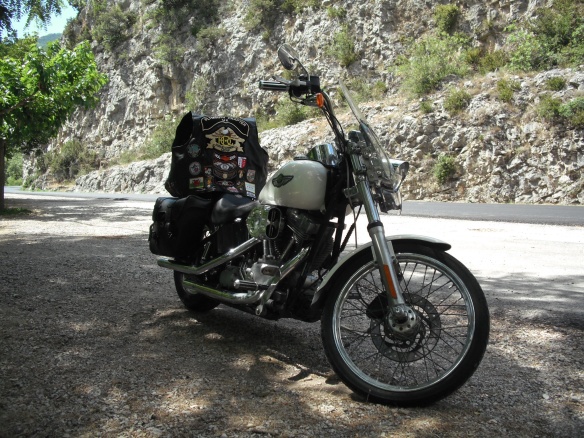 Driving through the gorge I noticed a number of springs at the roadside that had been turned into shrines, complete with troughs and in a couple of cases cross. Whilst we were having lunch a large truck pulled up and the driver went over to the spring, splashed himself with some water then signed himself with the cross and stood obviously saying a prayer. He then took some water in his hands and splashed it on his truck before driving off. I was intrigued by this ritual, which was repeated about fifteen minutes later by a car driver. I figured that this spring must have some significance, so before I set off I washed my hands in it and splashed some on Harley for luck. Five minutes later down the road, it poured down in the short violent way it can do in the mountains, darn it, forgot the prayer!

We stopped the night just outside Gap, a nice town that claims to be the southern gateway to the Alps.

….a claim that could just about be correct!