Sodium chloride, to give it the correct chemical name. Necessary stuff, we all need a little bit if it now and again. Nice on fish and chips too, but not to excess. I’ve come across it twice today.

The first time was as Harley and I climbed up towards the summit of the Envalira Pass out of Andorra. Here gritty rock salt was being thrown all over the road as sleet and rain fell at 0 degrees Celsius! Now, Ok, it was a fair idea to try to keep the road open, but did those guys figure out how long it takes to clean the stuff of a Harley? Road conditions were pretty grim, even the mad locals slowed down to a tip toe crawl! By the second pass, De La Casa, it was just raining and by the time we mounted Col de Puymorens 6km into France it was brightening up nicely.

Excellent and quite fast trip down the hill into Ax les Thermes, a super little town, famous for hot spas, skiing and being a regular stop on Le Tour de France. In Ax we picked up the D613 and promptly fell in love with another wonderful French mountain road. Well, not the first four miles which were liberally coated with liquid cow poo that had obviously been leaking out of a farm trailer. Worst of all was that on the hairpin bends the stuff was literally running downhill on the best racing line! Merde, as my French friends say! That aside, the road is lovely. Wonderful views, numerous Cols, lovely bends, great surface and sod all traffic! It’s still technically the Pyrenees and simply majestic! 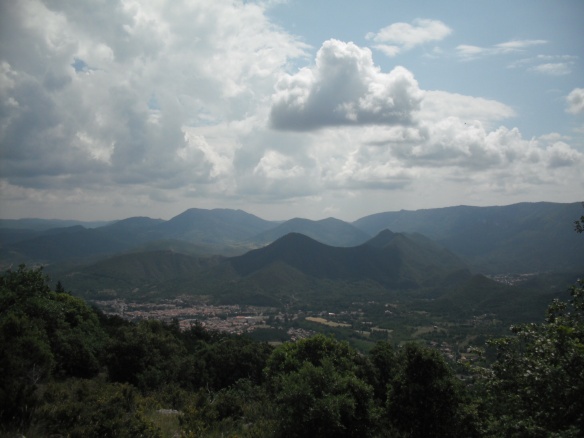 After Quillan the D613 heads into Corbières. The rock changes to soft limestone, meaning that this is wine country, it’s also wonderfully easy on the eye and incredibly peaceful. Small Chateau can be found along the way, making for a slow ride as each vista needs to be taken in.

This is at Serres.

Argues is very famous and quite impressive!

The small towns are the kind of places where lunch starts about eleven and ends just before it’s time for dinner. Life is to be savoured and enjoyed not squandered by working too hard! I detoured onto the D23 and passed through Lagrasse, it was still lunchtime…. 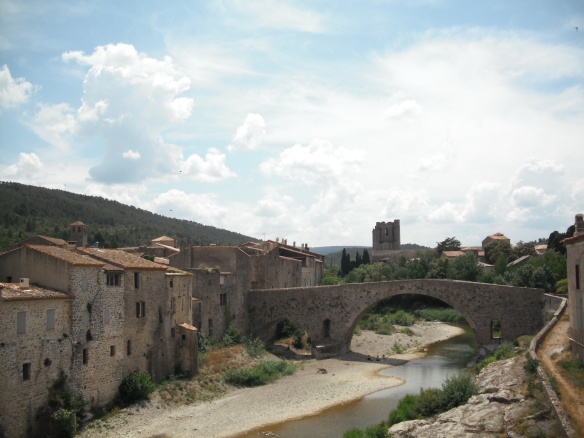 Very mellow in every sense, I love this country! After a coffee in Lezignan we went street fighting on the A9 Peage also known as “La Langudoccienne.” Nice touch that, it’s a main arterial route and it’s feminine! Gotta love the French language too! Boy, was that wake up time after the rural idyll that we had enjoyed for the last fifty miles! Not exactly dangerous, but definitely not a place for the faint hearted. I said it was going to be a quick dash and I sure wasn’t going to hang about, let’s just say we got to Montpellier in optimum time less an awful lot!

Harley and I then hung a right and headed to the shores of the Mediterranean Sea, three days ago we rolled off a ferry on the Atlantic Ocean, this is how geography works, good ain’t it?! So here we are in the small town of Aigues-Mortes on The Camargue. The town takes it’s name from the salt lagoons, it literally means “Dead Waters”, and has been a famous salt trading port since the times of the Crusades. Sea salt is still produced here and large piles of the stuff can often be seen waiting to be shipped out, but not today….could it all be on that bloody mountain road! No chance there, it’s far to valuable for that, but next time you reach for the salt pot just think for a minute that some of it could be from here!

Without a pile of salt to show you, how about a shot of Harley outside the city walls? This place is also one of the best preserved medieval walled cities in Europe, looks even better with a travel-stained Harley alongside!

Fancy another ride tomorrow? We could go somewhere interesting and new? OK, you twisted my arm!

“Saddle up baby, ride on next to me, last of a dyin’ breed!”