OK, hands up first of all…I know this is supposed to be a blog about travels on my Harley, but sometimes it’s also got to be about the bigger journey through life! Now I’m not about to claim that the following little tale is about anything profound, but it’s an example of how life can sometimes give you a good kick in the backside just for the fun of it!

Lets go back to last Wednesday evening, when I noticed a puddle of water appearing in the garden of Dookes H.Q.. Knowing that we have a water main passing through our land, I thought it prudent to give our local water company a call on their “Emergency Leak Line”. An hour and a bit later we were graced with a visit from one of their finest, who not only confirmed that we did indeed have a leak, the night’s lesson in the bleedin’ obvious, but by prodding around with his listening rod actually made water bubble up out of the ground at a faster rate! Then came the prize decision, that it would be OK to leave until the next morning, because “We don’t like to dig in the dark.” So that’s how at six o’clock on Thursday morning we woke to the sight of our splendid new lake, oh and the waterfall down into our neighbours gardens! Another phone call to the Emergency number saw the Water Company then take a further hour and a half to turn the torrent off! Good job it wasn’t gas!

Once the flow abated it was time to take stock. Two of our neighbours had twelve inches of water throughout the ground floor of their houses, another had water to carpet level in their study. We were much luckier, our house was spared but Harley’s home, my workshop, aka “The Man Cave”, had been under two inches of clay laden H2O! Oh well, out with the mop and fire up the de-humidifiers!

Fortunately most things were stored off the floor, but one or two items did not fare too well. My carbon fibre crash helmet, Mrs D’s bone dome and my spare biker boots were all swamped, along with some engineering tools and other bits and bobs. Our neighbours have had to move out of their houses whilst drying operations are carried out. After five days of consideration the Water Company have accepted liability, so good of them!

Once dug up, the pipe was found to have a split that was 92 inches long! It took five hours to fix on the day, but the clean up will take weeks or maybe months! Harley was unscathed, just as well really…I’m not very nice when I get upset!

On the bright side, all this water and sunshine has brought the Cowslips on a treat! 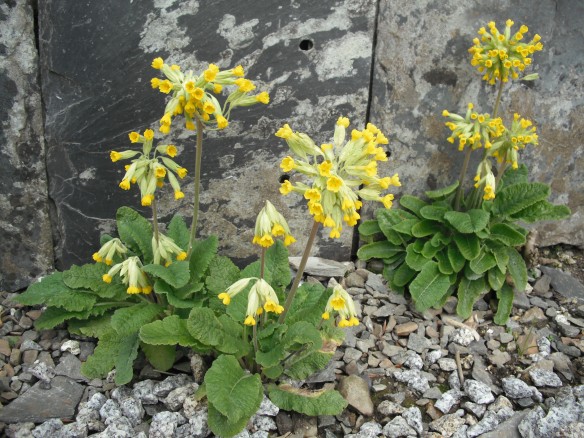 Catch you all later

…and I hope I’ll see you soon, I’ll be home come hell or high water!