Right then, as Harley and I are having an enforced break I thought it would be good to catch up on the Goldfinger front.

Lets start by going back up the Furka Pass.

This is a still from the film, Goldfinger’s Rolls Royce is climbing up past Hotel Belvedere. Notice two things: Firstly, the road is a dirt track; Secondly, note the size of the Rhone Glacier behind the hotel.

Now look at Harley in almost the identical spot.

The road is now Tarmac, but where has the Glacier gone?

Next up, this is where Bond watches GF having his lunch and where Tilly nearly shoots Bond.

I couldn’t actually stop in the same spot, far to dangerous, but this is the nearest I could get, Goldfinger’s view looking up towards where Bond is standing!

You’ll have to believe me on that one.

Now, I wanted to try to recreate the still of the Aston parked next to the railway line that was in an earlier post, but sorry again too dodgy to stop. There were road works in progress and trucks flying up and down, so no go. Lets try the petrol station in Andermat where Bond picks up Tilly, after running her off the road! 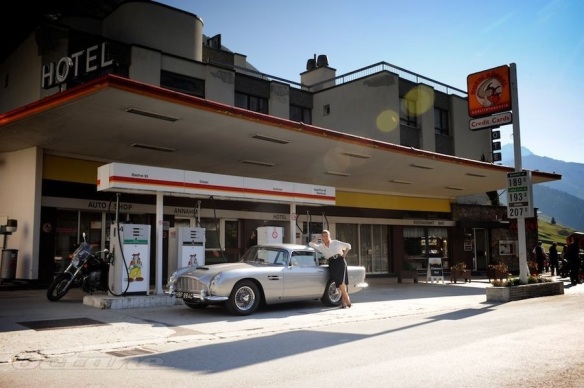 This is a shot from Octane magazine of a few years when they took Tania Mallet, who played Tilly, back to the scene with an Aston. Hope they don’t mind me showing you their picture…

…and this is Harley in the same location! Except they were having a delivery of petrol and I couldn’t quite get in the right spot, but you’ll get the idea!

So, I think that’s just about it on the Bond front, for this trip anyway. The location used for Goldfinger’s factory, which was supposed to be near Geneva, was actually the Pilatus Aircraft factory near Lucerne, but I believe has changed considerably and is way out of our route. There was one other spot that figures in the film and its on the Realp side of the pass, this was totally shrouded in cloud and a real no hope for a photo.

Missed a couple, but got the one I really wanted at Hotel Belvedere! Life can be good to you sometimes, don’t ya think?