… and how this orange and rum spelt cake was born and named.  Make yourself comfortable now for the tale of a sociable and rather cheerful biker called Dookes.

One day he was on his Harley Davidson happily vrooming along the winding roads with the wind blowing against his face, … when his stomach started to rumble. 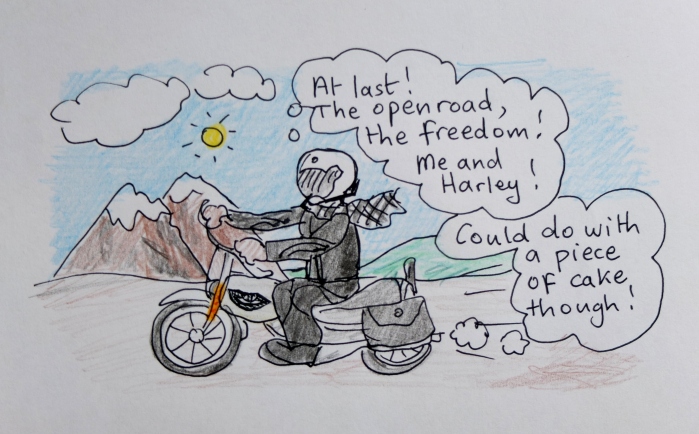 Dookes on the road with Harley 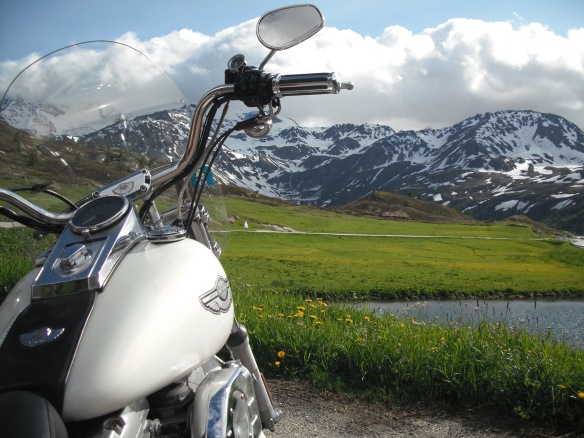 ‘What a beautiful view!’ thought Dookes, ‘but what I wouldn’t give for a piece of cake!’  This wish floated about his thoughts as he rode swiftly along the road so when night fell and he arrived home he knew he simply had to write a very important and urgent cloud message.

A cake-loving woman was pottering in the kitchen when she unexpectedly received this cloud message from a far-away place.  Her friend was URGENTLY requesting a cake recipe for his biking travels.  Well, not very very urgently but he would need to pack a healthy and solid (no, not brick-like) energy-giving cake for the long arduous adventures that soon lay ahead of him.

‘Now you might be busy and Mrs Dookes could easily bake for me’, wrote the biker tentatively.  ‘Are you certain you wish to make this cake?’

The woman felt somewhat confused.  Had news of her cake obsession, which lili’s cakes followers and her mum were so sadly aware of, not reached distant cloud lands?  Wild horses (or motorbikes) wouldn’t stop her!  She sent the virtual pigeon off: ‘I’d love to’ she replied. 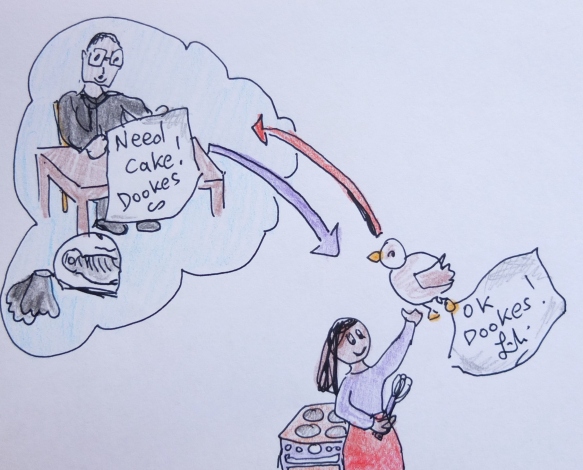 Hmmm, but which cake?  The woman thought long and hard (a few hours at least).  Some of her cakes were delicious but too delicate for a road trip.  Finally, she decided to combine the light-crumbed cake anglais with a traditional fruitcake, filled with extra amounts of nourishing nuts and dried fruit.  It would be soaked in orange juice and rum, and made with honey, unrefined brown sugar and spelt flour, all good for you of course!  You could use plain flour, but the two friends had long ago agreed spelt flour was a lovely tasty and healthy substitute.

So the far away biker gladly gave the cake plan the thumbs up and the ‘ealthy orange and rum fruitcake-cake anglais was born.  It was a bit of a mongrel and no-one could decide what it was exactly so it was given a hyphenated double-barrelled name and became a posh cake!  Tada!  An extra special recipe to share with sweet readers, healthy cake-lovers in the clouds and fellow bikers like Dooke’s Harley brothers who roam distant lands and might be feeling a bit peckish. 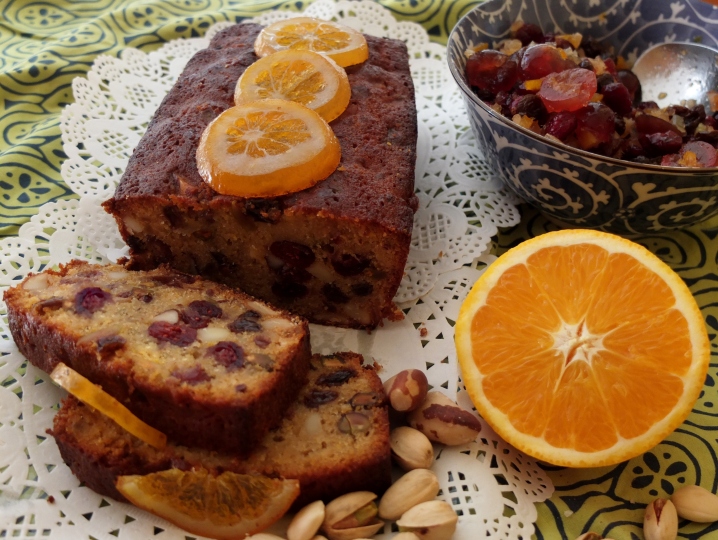 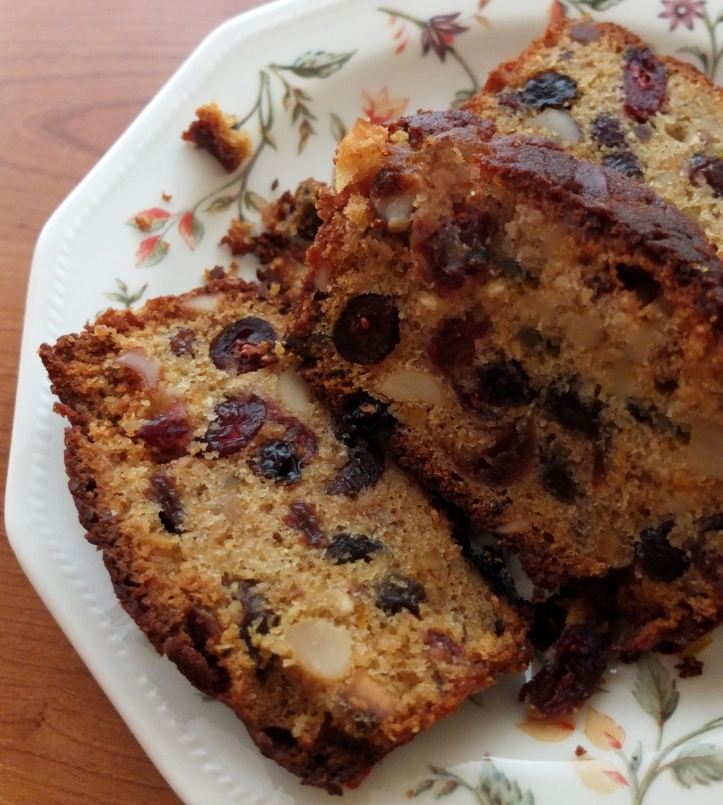 Preparation (from 24 hours to 5 days ahead of making the cake!)

The woman happily chopped up an array of dried fruits into little pieces (except the glacé cherries, which she just halved) and thought of how they would soon glisten in rum with a delightful whiff of alcohol (pheooouw!).  She’d told her friends they could soak them overnight in only orange juice, but she herself liked rum and thought Dookes might too. 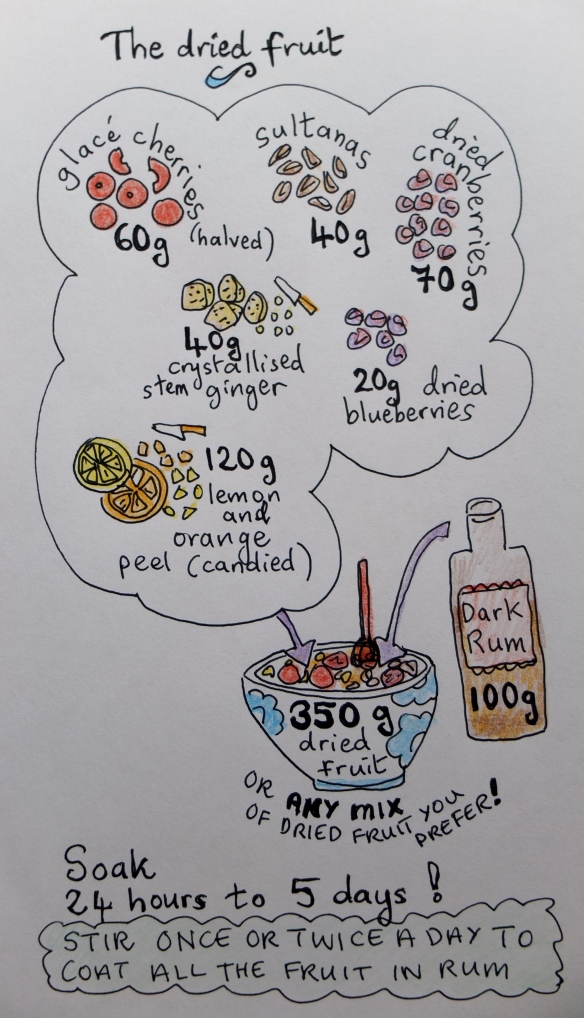 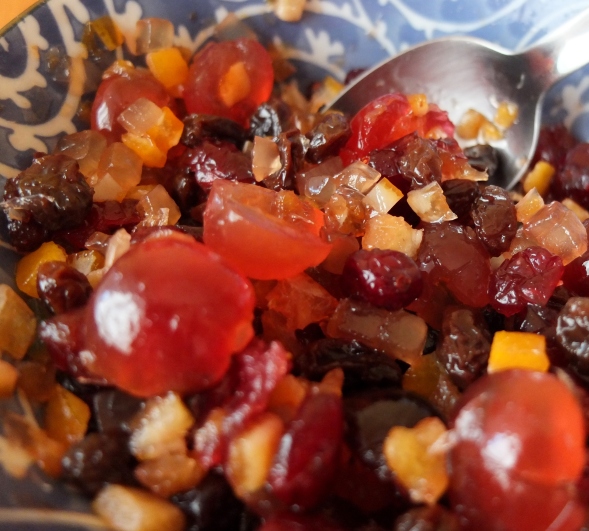 Now, the cake-loving woman was sure there was something she was supposed to be doing.  Her memory wasn’t quite what it used to be.  Oh yes, make the cake!  Doh…

First she pre-heated the oven, lined the loaf tin (metal or silicone) with greaseproof baking paper (making sure it was 2cm higher than the mould, all around) and allowed the butter to soften, before creaming: 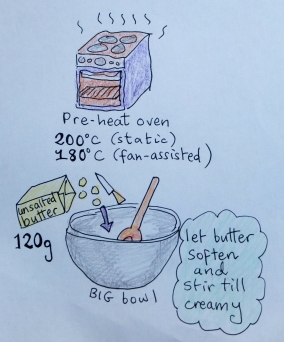 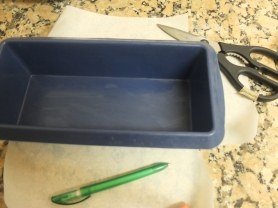 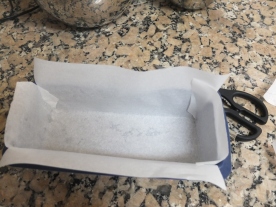 She started preparing the other ingredients as she hummed merrily along to the tune of All about that cake (psst … have a listen, it’s a great cake song!) 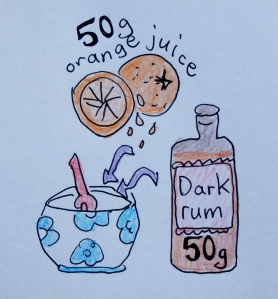 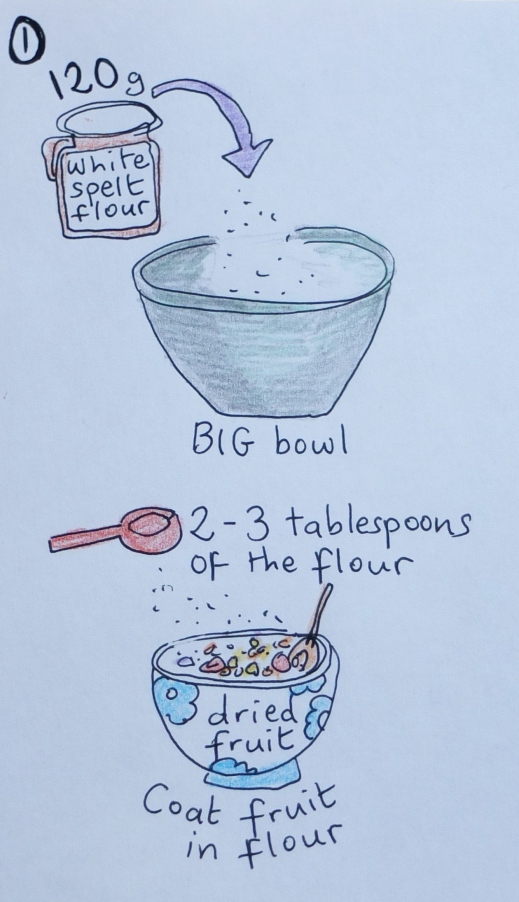 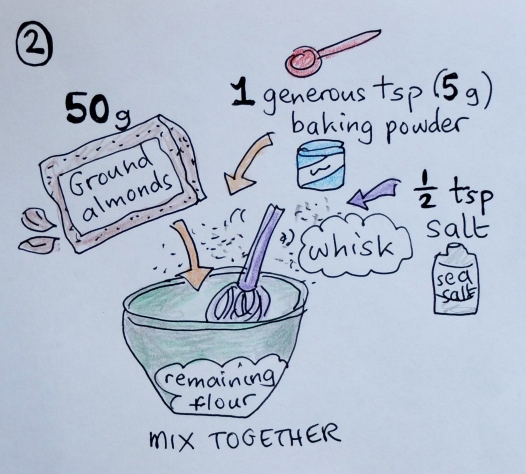 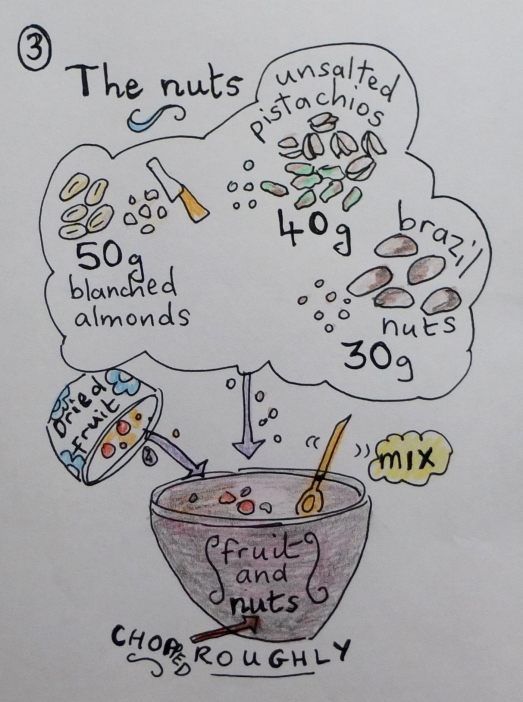 Then she rolled her sleeves up to do some serious beating and whisking.

Finally, it was time for some gentle folding.

And off the cake went into the oven.

After 5 minutes the cake-loving woman lowered the heat to 180°C (static, non-convection oven) or 160°C (fan-assisted oven) and let the cake bake between 1 hour to 1 hour 15 minutes.  She made sure she didn’t open the oven door for the first hour.  The cake was finally ready when an inserted skewer came out clean and the cake sprang back a little when pressed lightly with her finger.

The woman left the cake in the tin to cool for 20 to 30 minutes then made holes all over the cake with a skewer.  Using a tablespoon she carefully poured the remaining orange juice and rum liquid over the cake.  She let the cake cool then took it out of the tin, and tried a piece because she could wait no longer! (Note:  this cake actually keeps for up to a week or more, wrapped in greaseproof baking paper then again in foil or an airtight tin).

So the cake-loving woman settled down to munch her piece of cake then sent Dookes a new cloud message to let him know his cake was ready.  And out at the rock, she shared it with her climbing friends who always enjoyed eating healthily and so eagerly tucked into this spelt cake. They loved it and weeks later were still reminiscing about the luscious fruit, the hint of rum and overall tastiness of the fruitcake-cake anglais. 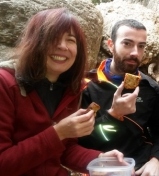 One enjoyed his slice so much he took it climbing with him! 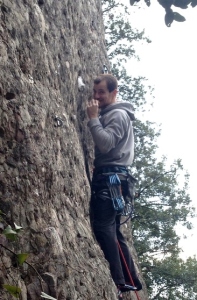 So the cake-loving woman could easily imagine Dookes going on his next road trip through the mountains with Harley, having a break and a piece of his cake. 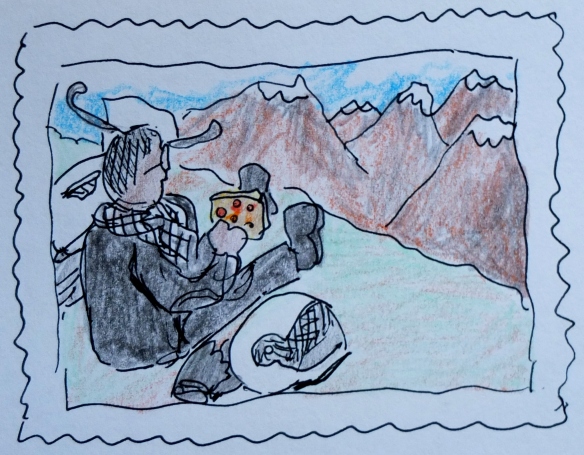 But then that’s another story, and one that Dookes will have to tell you himself as his biking dreams and adventures continue…

So sweet readers, where would you take your piece of orange and rum cake?  Hiking, shopping, on a picnic, to do sports or just to the living room for a nice cosy tea at home? 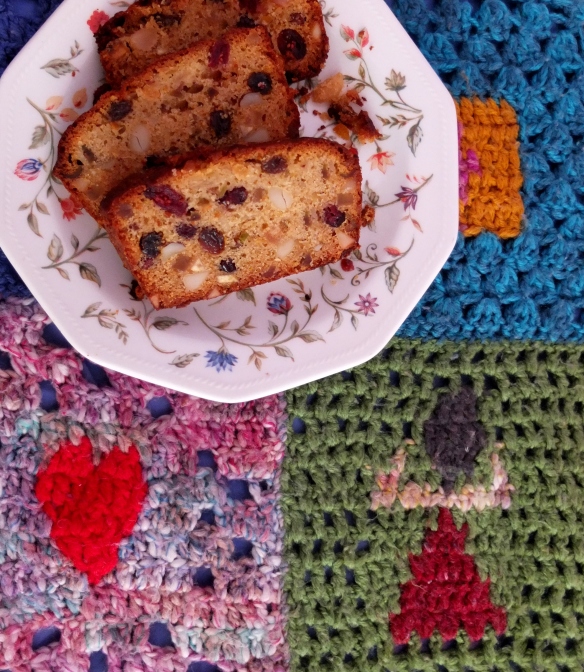 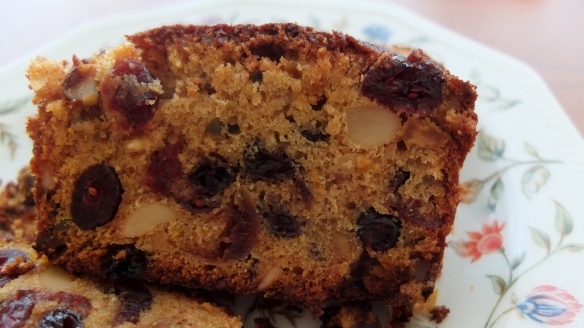 Now I’ll just thank Dookes for inviting me to write on his blog.  An honour and a pleasure.  Some of you might wonder about a biker and a baker teaming up for their first Guest Posting Experiment.  We met on an online blogging course and one day we’ll probably do what they recommend:  guest post in our own special fields on blogs similar to our own.

But this Guest Post is what’s great about the Land of Blog: expanding your horizons, going beyond your own walls to discover new things and make friends from every walk of life and corner of the world.  I’ve enjoyed my time in another land here where Dookes lives, as I’m sure everyone has and if you’re new have a look around.  I know Dookes will welcome you anytime at his blog and you’re also invited to come on over for a piece of cake back at my place, at lili’s cakes!

And cheers Dookes, speak soon!  Hope you enjoy your cake.  Let me know how you like it and where it goes with you on your travels! 🙂