This post is a bit of an experiment…my blog originally started to be all about my travels on a Harley Davidson; it’s sort of morphed into something more to that.

Following encouragement of various Blog friends I’m trying something a bit radical for me, Blog Cooking!

Lets see how it goes, but I warn you now if you don’t like pictures of meat cooking or even the thought of eating it…look away now!

Now where was I?

Time always seems to go so fast when I am in France, it’s probably because I enjoy myself so much here. There are moments however, when time seems to stand still and almost go backwards, regardless of where I am in the world.

Last Sunday was just one of those moments and it all revolved around a game of Rugby, or to be more precise, Rugby Union; the game played with 15 in each team.

The occasion? Wales were playing Australia in one of the group games of the World Cup.

Regular Blogonaughts may remember that I am a passionate supporter of my nation’s rugby team. I take every opportunity I can to go to home games in Cardiff and if not I watch televised games.

Just like on Sunday. I may be in France and the Welsh rugby team may be in Cardiff, but thankfully French television are providing excellent coverage of all the World Cup games. At 12:15 local time I settled in front of the screen to enjoy.

The first 40 minutes were thrilling, Wales played some excellent rugby and deservedly went into half time with a healthy 23-8 lead.

Then came the second half and time stood still. Australia edged back into the match and I began to get decidedly twitchy; at 26-25 I was more than worried! Then a wonderful penalty kick took Wales to 29-25 and solid work saw them over the line to a well earned win!

I was more than a little delighted!!!

Mrs Dookes is well used to seeing my emotional rollercoaster in action when it comes to my beloved Wales rugby team. She deserved a treat and so I headed off to the kitchen, time to cook!

After boeuf bourguignon one of my favourite French dishes is Magret de Canard, seared duck breast.

When I was younger, the only cooked duck I ever seemed to come across in the U.K. was a wretched thing called “Duck à la Orange.” It was generally half a rather thin and pathetic bird cooked to death and smothered with a sticky marmalade like incredibly sweet orange sauce. We didn’t know much better, but even then I thought that there had to be nicer ways of serving duck than this.

Then I discovered my old mate Floyd who introduced me to French cuisine, life and food was never going to be the same again.

So let’s start with basics, this is a dead easy dish to make. You can find all sorts of recipes for it, but take it from me, simple is best!

First up you’ll need the following:

Shallots, I like échalion, the long ones.
Garlic, get the plumpest freshest you can find, not the dried sad stuff in the supermarket, or better still grow your own! 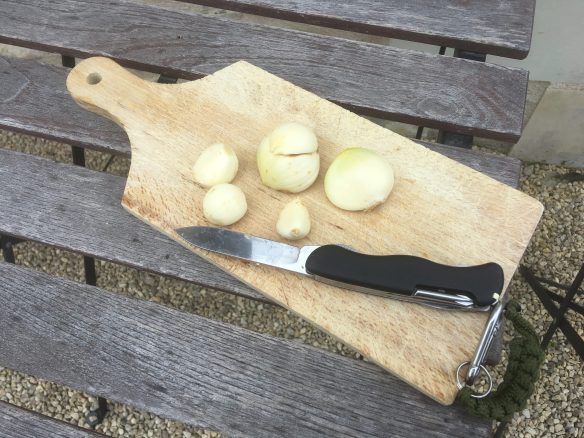 Carrots.
A sprig of fresh Rosemary.
A couple of Bay leaves.
Red Wine, I used a Côtes du Marmandais, tasty but not overpowering.
Sea Salt and crushed black pepper. 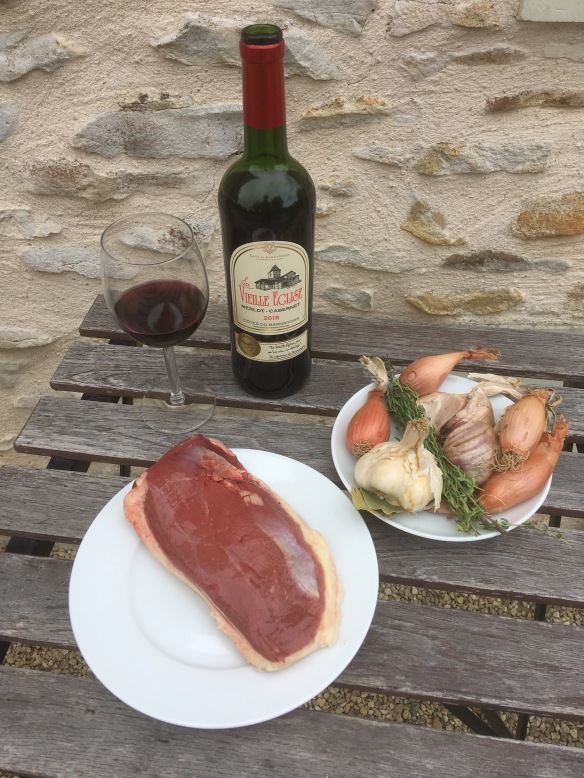 Oh yes and a duck breast! – This is obviously important as it’s the whole point of the dish, don’t skimp get the best you can. Here in France you can get lovely plump ones, with a nice layer of fat under the skin, that are big enough to feed two, the one I used weighed 450grammes.

First up, skin and roughly chop the shallots and garlic, I give the garlic a bit of a bash just to lightly crush it and release all those lovely juices. Scrape the carrots and cut into batons about 5cm long.

Heat some olive oil in a solid frying pan, rub salt and pepper into the duck breast and when the pan is good and hot, but not smoking, place the meat into it skin side down. Sear the meat until the skin is a lovely golden colour and the fat is starting to melt.

About 3 minutes should do it, but if you don’t like it too bloody give it another minute then turn and cook the other side. 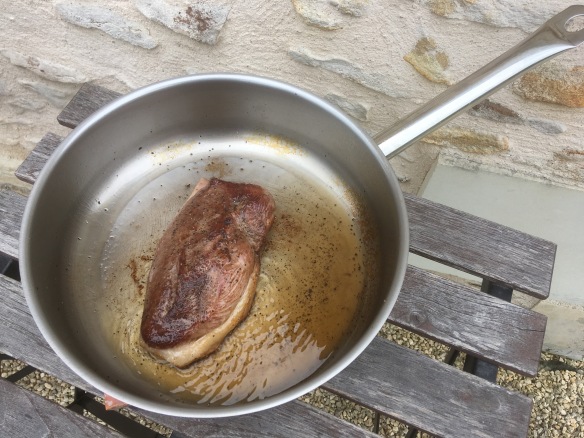 Remove the duck breast from the pan, wrap in foil and pop into the oven to rest.

Throw the shallots, garlic and carrots into the same pan and cook for about ten minutes until the shallots start to glaze and take on a light golden colour; don’t have the heat too high or you will burn the garlic and make it bitter. 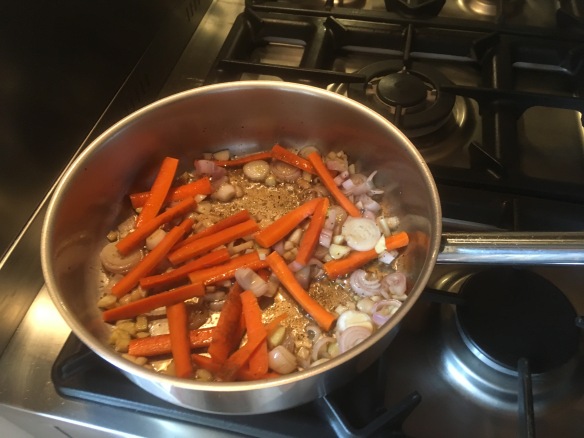 Now for the fun! Pour in the wine, to start with I put in about 400ml and bring up the heat.

You can flame off the excess alcohol, but with the cooking it will all just about disappear anyway. Add the rosemary and bay leaves then reduce for another ten minutes, stirring occasionally to stop it catching.

Almost all French home kitchen has a food mill, a mouli-purée, you can use a sieve if you don’t have one, but you now have to purée the lovely deep maroon contents of your pan.

Put your prized purée in a fresh pan and return to a gentle heat. Season to your own taste, I like a lot of pepper. At the same time I added a couple of teaspoons of Confiture de Pruneaux d’Agen, which is a rather nice French plum jam, which is not too sweet and has a nice sharpness. If I was being more fussy I would have soaked some dried prunes in wine and used those, but sometimes life is too short!

Remove the duck breast from it’s resting place, put on a cutting board and admire.

Then cut it into diagonal slices, keeping a nice strip of skin and fat on each slice. 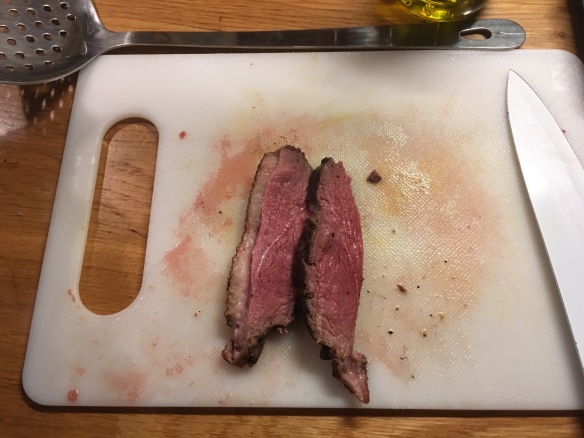 Divide up between you and your dining companion of choice, give the meat a nice dressing of the wonderful rich sauce. I served it with fresh green beans and my version of a croquette potato, again all very simple.

Push out the boat and accompany with a really nice, but not too heavy, red wine along with your very favourite dining companion, in my case Mrs D!

We had a bottle of Chateau de la Grille 2015, a Chinon wine from about ten miles away from where we are staying, lovely.

Well, there you are. That’s the first time I’ve ever shared one of my recipes on line and the first cooking blog post I also ever done….I hope you enjoyed it, I’ll get back to motorbikes soon.

Oh, look out, Wales play Fiji on the 9th October; Cymru am Byth!

2 thoughts on “Cooking up Some Magic”