Hello everyone, I posted this last year, but couldn’t resist revisiting it as today is kind of special for me.

Good morning everyone. Today is Saint David’s Day, the National Day of Wales. Best wishes to you all!

Dewi Sant/St David was born towards the end of the 5th Century in the region of West Wales known as Ceredigion. Whilst alive he built a reputation for his preaching, teaching and simple living amongst the Celtic people. He founded a monastery at Glyn Rhosin, which became an important early Christian centre. Dewi died on 1st March 589 and was buried in what is now known as St David’s Cathedral in Pembrokeshire where his shrine became a popular place of pilgrimage.

For centuries 1st March has been a national festival in Wales with parades, concerts, poetry readings and of course traditional food all being enjoyed. 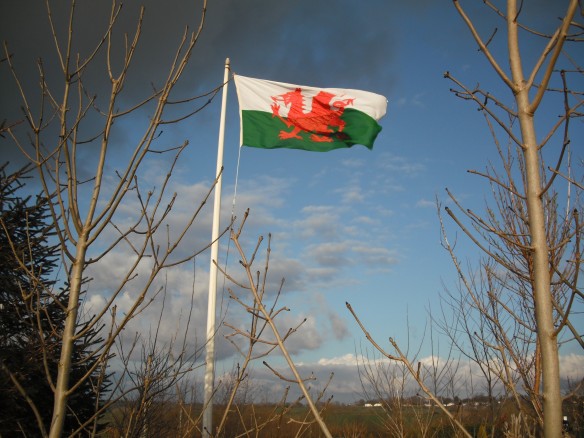 Around the country not only will you see the flag of Wales, Y Ddraig Goch (the Red Dragon) being flown, but also the flag of St David, a simple yellow cross on a black field.

Today is also the time when Welsh exiles around the world remember ‘The Land of My Fathers’ and try to ease the sense of “Hiraeth” that yearning homesickness tinged with grief, nostalgia, wistfulness and pride that we often feel.

The National Flower of Wales is the delightful and cheery daffodil which brightens the hedgerows at this time of year.

I hope you like them as much as I do. My late Grandmother always said that when you take daffodils into a house, then you take sunshine into that house; I think she got that pretty much spot on!

In the words of St David:
“Gwnewch y pethau bychain mean bywyd.” “Do ye the little things in life.”