Sport is a funny thing and one way or another is pretty much guaranteed to polarise people.

So cards on the table, I’m definitely one of the latter!

Which is a bit strange really, as pretty much no-one else in my immediate family is at all sports orientated…that is except my late Uncle Pete. He was like me, sports mad!

In his younger days Pete played football, lots of football (that’s soccer in some parts of the world!) and he was by all accounts pretty good at it. Good enough to be in the squad of a professional football club; until sadly a knee injury cut short his playing career. Ironically if he had the same injury today he would be fixed up and playing in a matter of weeks, such are the advances that sports medicine as made.

Uncle Pete was also my Godfather and he took things seriously enough to not only take me to buy my first pair of football boots, but also to my first football match – a very lowly non-league affair. The seed had been sown though and I began to hanker after going to a “proper” football match, a league game!

That’s how, exactly Fifty Years ago, my late Father took me and a few of my young friends to my very first “proper” game.

Football and indeed football grounds were very different in those days, particularly in the third tier of the English Leagues. The home of Watford Football Club since 1922 was and still is, Vicarage Road Stadium. To be honest, calling the place a “Stadium” in 1967 was tantamount to breaking the laws of Trade Description; glamorous it was definitely not!

In this aerial photograph from the time you can see that the ground was shoe-horned in between residential suburban housing and to the extreme left Shrodells Hospital. I remember queuing to go through the rickety old turnstiles on Vicarage Road itself, that’s the road cutting across the top of the photo. We stepped onto the banked concrete terrace behind the goal at the Vicarage Road end and I fell in love with the place!

At the far end was the “Rookery Stand,” that’s the light grey shed-like structure at the bottom of the picture, actually it was simply more terracing with a roof over it! To our right was the Shrodells Stand, which had some seating and on the opposite side of the pitch stood the grandly named “Main Stand” that also was about 50% seating. From that dear reader, you may be able to deduce that the majority of Vicarage Road Stadium was for you to watch football standing up and largely without any protection from the weather. Happy days!

For some reason we made our way to the area in the bottom corner of the photo, between the Shrodells and Rookery Stands. This was football at it’s most basic, the area was simply a compacted bank of ash, but it was magical.

In those days the pitch was only loosely described as grass; it appeared to be around 60% mud, 30% sand and possibly 10% grass/weeds, but to my young eyes it was the original field of dreams. As the sun dipped in the early winter sky and the simple floodlights came on, it got even more magical.

The game itself was a thrilling affair to a first time supporter, as I was suddenly becoming. Little did I know that the peculiar thing about supporting a team is that it gets into your very DNA. You share the euphoria of great victories and promotion with the despair and depression of defeats and relegation. All this was still in the future though…

Watford went on to win 7-1! Could it ever get any better than that?

Well, yes it could, but it would take nearly 15 years when eventually my beloved “Hornets” as Watford are known, eventually won promotion to the top-tier of English football, the old “First Division.” The next season, 1982-83, they finished runners-up; still their best ever finish. 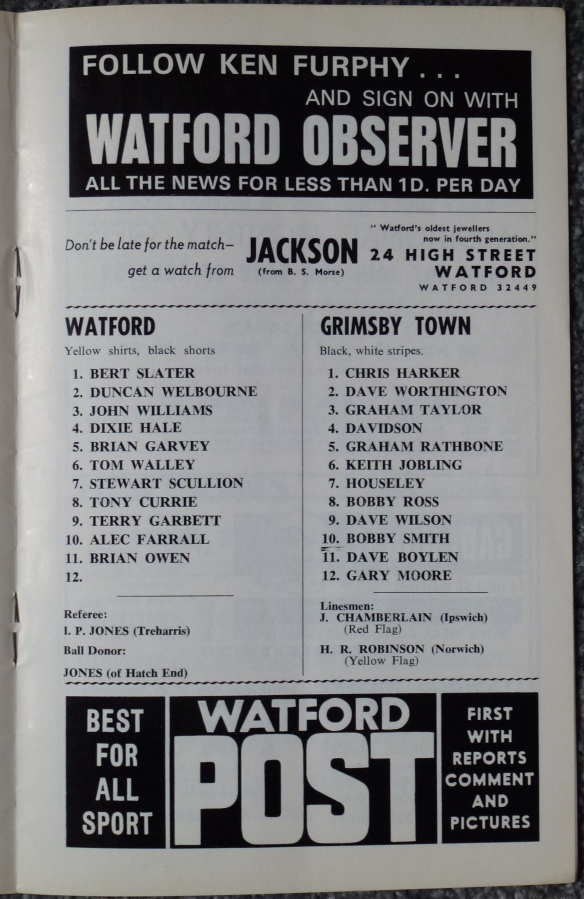 I still have the programme from that match and it’s interesting to look at the team line ups for that day 50 years ago. Playing at full-back for Grimsby and wearing number 3 is one Graham Taylor, at that time a young 22-year-old. The same Graham Taylor who later would become manager of Watford, guide them to successive promotions and the glory days of the early 1980’s and subsequently manage the England national team. Sadly Graham passed away suddenly earlier this year.

Over the years though it’s been quite a roller-coaster of emotions. Yes there have been incredible highs, but oh my, those low points have also been very dark places too!

Today Watford F.C. play in the Premier League, the highest level in the English football league system and the team squad is drawn from a wonderful mix of nationalities. The club was founded in 1881.

These days living 300miles away I don’t get the opportunity to visit Vicarage Road very often, but I diligently follow what my beloved “Hornets” are up to every time that they play.

Yesterday then was the 50th anniversary of my very first Watford F.C. experience.
The Hornets hosted Tottenham Hotspur and the match ended in a 1-1 draw.

Vicarage Road Stadium today is truly worthy of the name; it’s a wonderful amphitheatre with an all seating capacity of 23,700 and great facilities, quite a change from the days of standing on a mound of ash!

Vicarage Road Stadium today; from roughly where I first stood 50 years ago! Photo by Jbb503

As for me; well I never really was much good playing football, except as a Goalkeeper and you don’t need many of them in a team.
With my Welsh blood, it was always going to be rugby that I embraced and excelled in. I played for a number of clubs, at a reasonably good level, before finally hanging up my boots in my mid-thirties after 24 years of playing the game!

11 thoughts on “A Golden Anniversary – Or 50 Years of Roller-Coaster Emotions!”