I’m quite proud to be labelled as an “All Weather Rider.”

Now normally, to most people, this would indicate I am some kind of mad-man who enjoys riding in the rain! Well, not exactly thank you, like most sensible folk on two wheels I would really much prefer to ride in dry daylight, but when you do long distance road trips you sometimes have to contend with what nature throws at you.

Over the years, weather-wise, I think I’ve just about collected the set, ridden in everything that there is and yes had a few “Squeaky-Bum” moments along the way as well. Sometimes though, it’s the conditions that appear the most benign that can catch out the unwary and hot days are right up there!

The hottest temperature that I’m aware that I’ve ridden in was last year in Provence, South East France, when the mercury was nudging 40 degrees Celsius, that’s about 104 Fahrenheit. Add into the mix a whopping big V-Twin engine between the legs and you can appreciate that it was bloody hot! The biggest problem with days like that is fatigue, you quickly get tired in the heat which screws your reactions and clouds judgement. Dehydration can be a real issue too.

Now all of this is very predictable if you are riding in countries where high climatic temperatures are the norm. Here in the UK though, we don’t have a climate… we just have weather!

On Tuesday this week Mrs Dookes had a business meeting in Plymouth, that’s the famous sea port city about 25 miles from Dookes H.Q. and as her meeting would be over by lunchtime we decided to meet up for a bite to eat. All good so far.

I thought it would be nice to take “Baby” for a little ride around and enjoy some of the good weather. I set out and rode a nice sixty mile loop taking in the lovely A374, with its twisty bends from Trerulefoot to Torpoint, before taking the chain-ferry across to Plymouth. 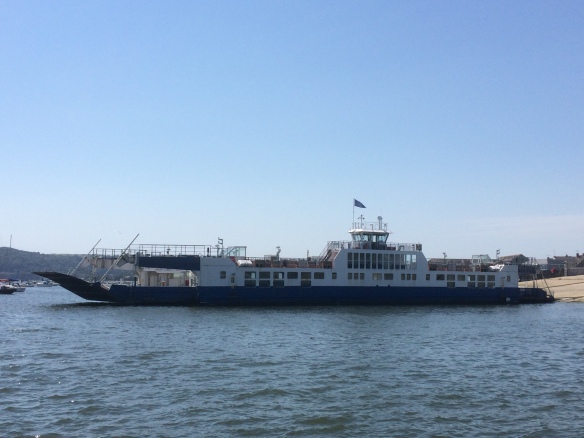 Torpoint ferry, not high on the list of best looking ships!

What I didn’t realise was that whilst we were out the temperature would soar to 30 degrees Celsius and guess who put the wrong jacket on and took the wrong bike as Baby’s faring keeps all the passing breeze off me? Fortunately I took a change of shirt and a handy towel as by the time I arrived for our lunch date I was, frankly, dripping!

Our rendezvous was the old Royal William Yard in Stonehouse, a part of Plymouth that lies adjacent to Devonport Naval Base on the Hamoaze estuary. 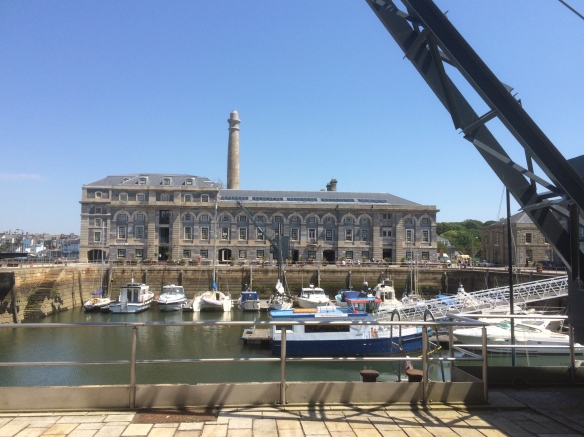 The yard was a major victualling depot for the Royal Navy from 1826 until 1992. It’s an amazing 16 acre site that is all historically protected and although now in private hands still very much retains it’s identity and heritage.

Once a store for beer, spirits and vinegar; now expensive apartments.

Urban re-development has converted many of the buildings into award-winning swanky apartments, boutiques, exhibition halls and restaurants. There are still odd corners that await the developers touch,

but largely most of the restoration is now complete. It is, however, one of the most impressive industrial monuments in the whole of the UK.

The scale of what this place did in its heyday is amazing. On site was a flour mill, bakery, slaughterhouse, butchery, brewery and cooperage, not to mention dozens of other smaller workshops and storehouses. Worthy of note is that the flour mill could produce 270,00 pounds/122,500kilos of flour every week, that’s an awful lot of bread and ships biscuits! 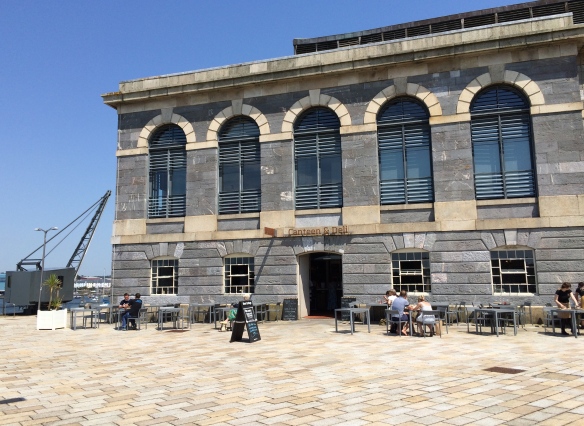 Part of the brewhouse, now a restaurant.

The impressive buildings were designed by the architect Sir John Rennie and are built of local limestone and granite. The whole site is also paved with similar stone cut to engineered precision, these are not common cobbles! 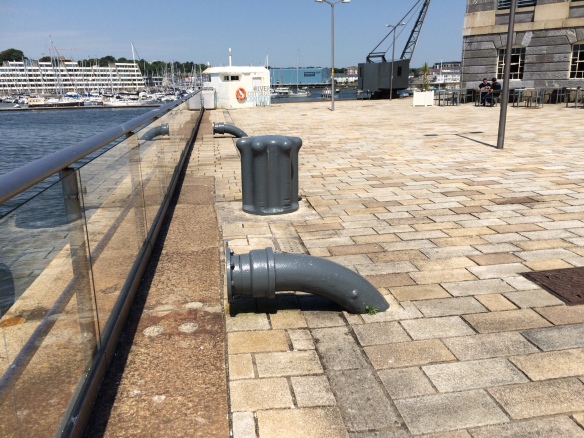 Anyway, we had a super lunch with great views up the river towards Cornwall

…..then it was time to start-up Baby and cook a bit more!

Next day, it was ten degrees cooler and today it’s been raining!
Like I said, we just have weather!