The more I travel, the more I have my faith in the inherent goodness of human nature restored.

Sure there are some crap things going on in the world at the moment and yes there are some truly twisted and evil people about, but they are the minority. That is why their perverse ways will never win against the greater majority.

Why am I being so philosophical? Well it’s probably got a lot to do with being in Italy!

What other country would come up with the idea of Cafe Corretto? It’s simple genius, espresso coffee is full of caffeine and wires you up, alcohol chills you out and makes you mellow; so the Italians figure if you put coffee and grappa, a fire-water made from distilled grape skins, together in the same cup, you won’t get wired or drunk! What a brilliant idea! I’ll have two, thank you!

I bowled into Livigno yesterday evening, with eyes like radar scanners having battled the crazy Swiss on autobahn and mountain roads and suddenly everything changed. Life became, just. . . chilled. At the customs post the duty officer just gave me a friendly wave and a thumbs-up whilst pointing at Baby Blue! 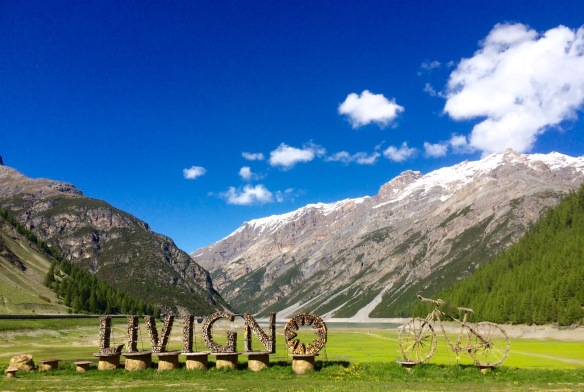 Livigno is a funny place, it has “Duty Free” status and although not exactly a tax haven, it’s a near to one that you can get! The economy is based on tourism, skiing and shopping. . . Mrs Dookes is gonna want to come here I think!

Next I had to find my hotel, but the one way traffic system was baffling me so I stopped to ask help from a policeman or Carabiniere as they are called here. First thing he said to me was, “Bella moto/Nice bike!” Now that’s always a good start. When I told him which hotel I wanted he just waved me up a street that had “All traffic Prohibited” signs! Next, I pulled up in a small square just to get my bearings and a chap, who turned out to be the barman in a street side restaurant, appeared out of nowhere offering assistance; he’s now officially my new best Italian mate! We talked bikes, roads, mountains and watches…yeah that’s another story!

There’s not many places on the planet where I feel at home really quickly, but Livigno has hit the spot for me and I really can’t explain it, because normally it’s not the sort of town I’d choose at all…it’s those Italian laid back vibes I think! What’s more, just about everyone has a smile on their face! It’s probably those duty-free prices; petrol at €0.92/litre, it’s €1.40 in France for example.

I think the mountain air must have something to do with it as well!

Now, jotting this down over the most incredible breakfast; fruit, cereals, bread, dried meats, salami, cheese, pastries, cake, biscotti and of course more strong coffee, plus a view out over the mountains, life is still good and people are, well, just people who mostly want the same things from life….and despite what we in the western world hear from the media, it’s normally the simple things that make us most happy. In Italy that seems to revolve around a cup of incredibly strong espresso!

Talking of which, I was offered and accepted an “Espresso colazione,” that’s breakfast espresso. When it arrived, I estimate it was the size of at least four normal espressos and as strong as a nuclear reactor; I’m floating above the floor now!

With that, it’s time to get into my riding gear and go find some more of the most fantastic creatures on this planet; some more interesting people!

6 thoughts on “Changing Down a Gear.”