Good evening from the Austrian Tyrol!

Today has been the sort that I can do without, but when you are off on a road trip you just have to accept what the weather clerk throws at you! It’s not often that I get out the rain suit, but today it’s been on almost all day, yeck!

I’m beginning to think that I need to avoid Switzerland, every time I go there it rains! It only took me a shade under two hours to ride from one end of the country to the other but apart from the last couple of miles it was awful! I crossed the River Rhine twice again today, once going in and later going out of Swiss territory. It was a lot smaller when we crossed the second time and passed into the tiny state of Lichtenstein.

It only took about fifteen minutes to cross Lichtenstein, and that included a stop at a petrol station too!

Once in Austria, I had hoped to go via the Silvretta Mountain road, but the weather was so bad I aborted that plan and went via the Arlberg Pass and that wasn’t much fun either! At 5883 feet elevation, that’s 1793 metres, it’s not the highest pass around, but sleety rain at the summit and a road surface like glass made for a less than pleasant experience. We rejoined the Autobahn following it East though the Tyrol, passing Innsbruck and by the time we arrived in Jenbach our night stop things were looking much better. Four countries in one day, that’s a bit crazy!

Things were brightening up, so we popped up to see the Achensee, the largest lake in the Tyrol. 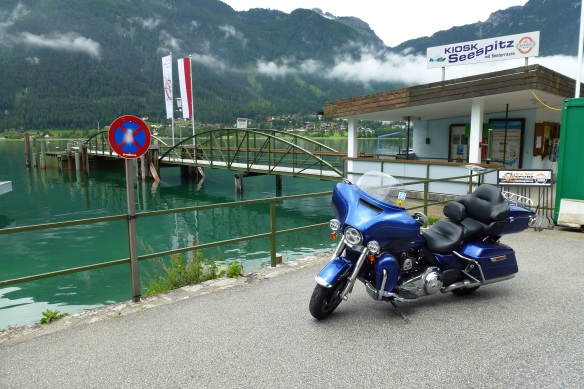 Just time to grab a panorama shot on the way to the hotel which is in the village in this photo.

You know, it wasn’t such a bad day after all!

6 thoughts on “Clouds and Rain”