After a thoroughly enjoyable five hours, yes honestly, in the railway museum we pulled out of Mulhouse and headed for Germany. Not such a big deal really, it’s only seven miles down the road and suddenly we were crossing the mighty River Rhine and the border. We certainly are crossing off the big rivers of Europe on this trip!

The plan was to head up into the mountains of the Black Forest, which frankly looked a bit forbidding and covered in cloud. As we took our planned route and began the climb we rounded a corner and that was it, the road was closed. . . No advance warning either, Straße Gesperrt! Oh yeah and no diversion route suggested as well, thanks Germany! A quick consult of the map showed two options, the Northern one would put at least sixty miles on our route and the Southern one would be a lot shorter, but probably a bit tedious on the Autobahn. South it was then, with strains of Kraftwerk passing through my mind! Thirty miles of Autobahn was enough for me, even though it had a 120kph limit, no one was sticking to it; no that’s wrong actually everyone was behaving except for anyone driving a Swiss car and they were everywhere, very fast, very close and very dangerous!

I decided to bale out onto ordinary roads and just for fun crossed the Rhine again, but this time into Switzerland; three countries in less than two hours, bonkers! Now here was a strange thing, in their own country all Swiss registered cars all stick to the speed limits, drive with plenty of distance and generally behave, strange!

At Koblenz we crossed back into Germany and found our hotel in the old town part of Waldshut-Tiengen, a pleasant sort of place with a nice up-market feel and traditional buildings adding character. The Main Street is pedestrianised and makes for an agreeable stroll. 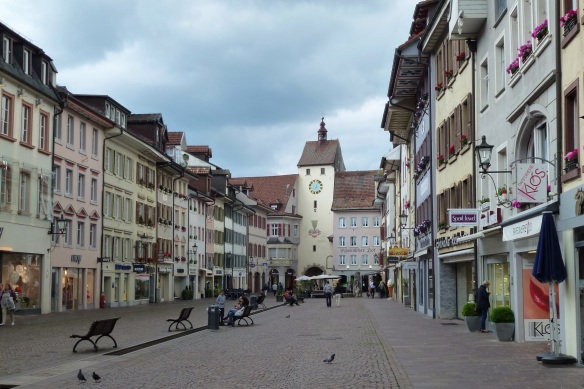 The view from the hotel window.

Oh yes I’d better show you a picture of the Rhine as well! The chap on reception at the hotel said that it’s not so much of a river, it’s more about what defines people of these parts; I rather like that! 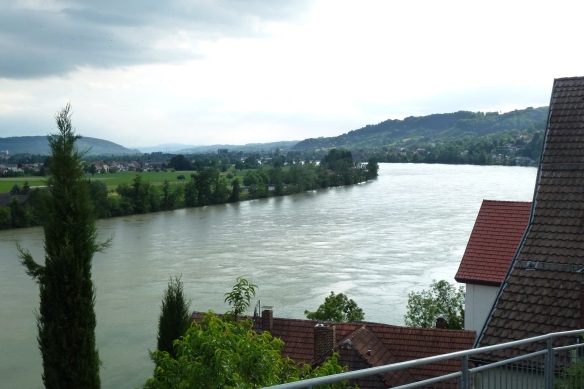