Today is the 70th anniversary of Victory in Europe Day, generally known as VE Day. It marks the formal acceptance of Nazi Germany’s unconditional surrender and the end of World War II in Europe.

In Northern Europe things are gearing up towards D-Day; the allied invasion of Northern France, which will eventually lead a year later to the liberation of the occupied countries and the end of this terrible conflict.

The base has been on “Lock Down” for the last 24 hours, there is an operation planned for this evening. Dispersed around the perimeter of the base, four engined Lancaster bomber aircraft are being readied for tonight’s mission. Fuel, ammunition, marker flares and bombs are being loaded as the engineers carry out final checks and adjustments to the machines. Most aircraft will carry one 4000lb bomb and sixteen 500lb bombs, though on some the load will be augmented with special marker flares to provide an accurate aiming point for the main force. This is 83 Squadron, the Pathfinders of RAF 5 Group, a crack unit that specialises in night-time low-level marking of targets, an extremely hazardous undertaking.

An 83 Squadron Lancaster; OL-Y, in flight.

The aircrew flying tonight have gathered in the Briefing Room and nervously await their mission, which is revealed by the base Intelligence Officer. Tonight they are attacking the airfield of Lanvéoc-Poulmic, just south of the maritime city of Brest, in Brittany, North West France. There is a buzz around the room, it’s not as risky as going to Berlin or The Ruhr Valley both regular haunts of “83”, but Brest is heavily fortified and the target is a Luftwaffe (German Airforce) fighter base which is sure to give a hot reception. The aim of the raid is to push the German fighter aircraft back from the planned invasion beaches and deny the enemy the use of bases within short-range of the landings.

The briefing ends and the nervousness in the room is growing. Notwithstanding that every man here is a volunteer, bombing operations over occupied europe are dangerous, there was a better chance of survival in the trenches of World War One than amongst the aircrews of Bomber command. A “tour” comprised 30 operations and the chances of you completing that was only 27%, the death rate was 44.4%. Just time now to pop back to your room and check that things are in order; things like the “If I don’t come back” letter to home.

20:00hrs
The crew of Lancaster ND818, code letters OL-T, gather together and hitch a ride on the crew truck to their aircraft on the far side of the ‘field as dusk begins to fall.

A Lancaster is prepared for action.

She’s an almost new Avro Lancaster BIII, this will be her third mission. On arrival the men disembark and are greeted by the “Crew Chief” who declares the aircraft ready for service; Pilot and aircraft commander, Flight Lieutenant Allan Whitford DFC, signs the acceptance papers and the ‘plane is officially his. 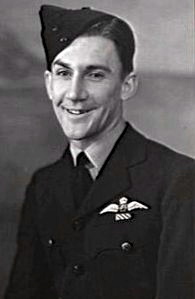 Whitford like three others of his crew of seven is an Australian, from Perth in Western Australia to be exact. Now a seasoned veteran of 39 missions he was awarded the Distinguished Flying Cross in December 1943, before the war he worked as a railway clerk; he is just 23. Helping his Pilot with the pre-flight checks is Sergeant Harold Millard, the flight engineer, his job is to monitor and control the complex systems and help the pilot fly the aircraft.

The Flight Engineer adjusts an instrument on board a Lancaster.

Climbing into the rear of the aircraft is Flight Sergeant Leonard Arnold, his is the loneliest and coldest position of the crew, tail gunner. The plexiglass has been removed from his gun turret to give him a better view of the night sky as he scans for enemy night fighters and so tight is it in there that he has to hang his parachute on a hook further down the fuselage; like his Flight Engineer he is from the RAF Volunteer Reserve.

The Tail Gunner in his turret. Cold, lonely, dangerous.

Mid-Upper Turret gunner is Warrant Officer Dennis Cross, another RAFVR man, a veteran aged 22. A sits on a canvas sling seat behind two .303 machine guns in a gun turret halfway along the top of the aircraft and will be constantly scanning the sky for enemy aircraft.

Mid-Upper Gunner in his Turret.

The Navigator is another of the Australians, Flight Lieutenant Watson Loftus DFC RAAF is from Homebush in New South Wales. At the moment he is settling into his position, getting the charts sorted and warming up the various electronic navigation aids. His DFC was only awarded on the 21st April and he too is a 22-year-old veteran.

Almost next to the navigator sits Pilot Officer Newman Higgins from Earlwood New South Wales, the Wireless Operator/Air Gunner who is also switching on and tuning in his radio equipment. He is the baby of the crew at 20 years of age. 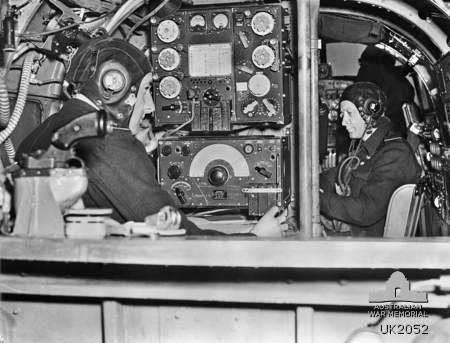 Wireless Operator and Navigator at their stations.

Finally there is the bomb aimer, Pilot Officer Robert Dobbyn, 21, from Queensland Australia. He will be up in the plexiglass nose once the plane takes off, but that’s forbidden during takeoff and landing. So he jambs himself into a corner behind the main spar in the middle of the aircraft, he tries not to think about the bomb load directly under his backside. 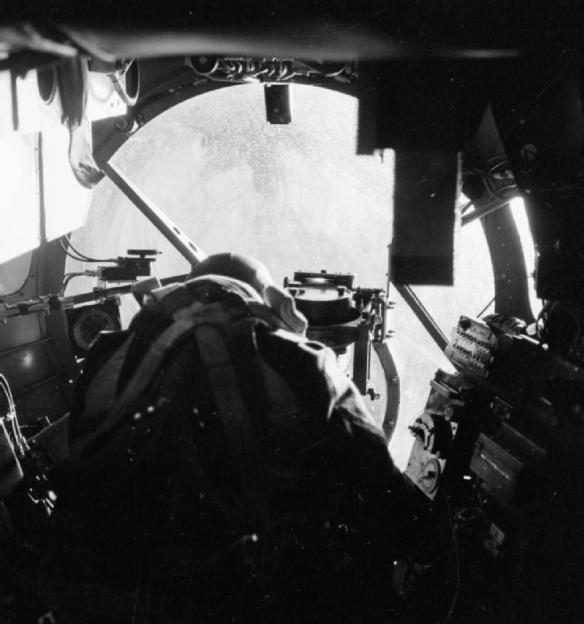 A Lancaster Bomb Aimer looks down to the target.

20:45hrs
A green flare from the Control Tower announces that the mission is on. Allan Whitford signals to the ground crew and one by one the powerful Rolls-Royce Merlin engines cough into life. Harold Millard, watches the gauges intensely as the pressures and temperatures rise; electrical charge is good all magnetos are behaving and hydraulic pressures look fine. With hydraulic power the gunners check that their turrets move freely.

One by one the pilot calls each crew member on the intercom to confirm their readiness; six “OK’s” reply and now they wait, the air pulsating with the throb from the mighty engines, palms sticky with nervous sweat, throats dry.

21:00hrs
Another green flare and the aircraft begin to move towards their assembly points, ready to thunder down the runway and take off.

21:12hrs
ND818 moves into place at the end of Coningsby’s main runway 08/26, at over a mile long it should give the heavily laden bomber plenty of time and space to claw itself into the air.

The radio crackles in his ear, “T – Tommy, clear for take off.” “Roger, cleared for take off, rolling!”

Whitford pushes the four throttle levers fully forward, the Flight Engineer has his hand behind his Pilot’s to ensure all throttles move smoothly together, the port side engines are given a touch more throttle to counter the aircraft’s tendency to swing to the left. Both men watch the gauges as the engine boost pressures rise and the revs climb to 3,000rpm. In the rear of the aircraft the noise is incredible from the four 1280hp engines straining against the brakes.

The flying controls. Throttle levers in the middle, control column on the left.

The heavy bomber at first slowly, then rapidly accelerating, begins it’s dash along the darkening runway.
The tail rises quickly as Flt Lt Whitford guides the leviathan down the centre of the tarmac strip.

At 500 feet altitude Allan Whitford raises the flaps and adjusts the trim. Speed is now 160 knots I.A.S., nearly at 175, the best for climbing.

21:20hrs
On the ground the next aircraft takes up it’s position, a golden sunset lights the western sky silhouetting and caressing T-Tommy as she departs and climbs towards the heavens.

On board ND818 there is still work to be done, but the anxiety of take off loaded full of bombs and fuel is behind them. Soon they reach the rendezvous point and circle to formate with the other squadrons taking part in the mission.

It’s largely an Australian affair tonight. The raid comprises of aircraft from 463 and 467 Squadrons which are both Royal Australian Air Force units, whilst “83” will lead the show by marking the target with flares. Initially the “Master Bomber,” who is flying a super fast Mosquito, will drop small flares known as ground markers, then it’s down to the crew of ND818 to further mark on these with more flares and bombs whilst the other two squadrons will come in at a higher altitude for the main attack.

Robert Dobbyn is now lying at his bomb aimer’s position in the nose, looking down and calling landmarks to Navigator Loftus. Then comes the call that really heightens the tension.

The gunners strain their eyes just a little bit more, searching for any enemy night fighter that may be stalking amongst the clouds.

The dark French countryside passes beneath them as ND818 begins to descend to 6000feet and the attack.

The target is located South across the bay from the city of Brest. Originally it was a French Airforce seaplane and training base, but now in the hands of the Luftwaffe it homes German fighter bombers, convoy raiders and possibly a few night fighters. Intelligence reports from the French Resistance, the Maquis, indicate up to 190 german aircraft are resident.

Searchlights probe the sky and anti-aircraft fire, known to the crews as “Flak,” begins to spray upwards into the night.

The sky in the target area has a scattering of clouds, but the view of the airfield is good. The first flares are dropped by the Master Bomber who circles his aircraft to check the accuracy; then he calls in “83” to continue the job.

Ahead of ND818, sister Lancaster OL-V begins its run. Tail Gunner Clayton Moore realises that they are not alone, he has spotted a German Nightfighter closing in on them from below and behind. “Corkscrew left,” he screams into the intercom. His Pilot throws the heavy plane to the side in a desperate attempt to throw the attacker off. Moore can see that the Fighter is still with them; “Flaps!” The plane shudders and almost stops dead in the air as the flaps extend and violently slow the aircraft. Caught unaware the German plane narrowly shoots over the top of the rearing bomber as the Mid-Upper gunner lets fly a burst of fire at it with his twin browning machine guns. “That was bloody close,” someone says as silence returns and V-Victor circles to resume its attack.

The airfield is now well-lit by more flares and smoke rises into the night sky.

Flight Lieutenant Allan Whitford and his crew begin their attack.

Robert Dobbyn lies in the nose concentrating on positioning the flares on the target, the aircraft needs to fly straight and level for ten seconds; the gunners continue to scan the sky; Harold Millard watches the engine instruments in case any show signs of being hit by the shards of metal from the anti-aircraft guns, he’s also ready to assist his pilot in case he is wounded at a critical moment. Navigator Watson Loftus can only sit at his post ready to plot the course home, whilst Wireless Operator Newman Higgins is concentrating on the various radio messages between the aircraft.

The anti-aircraft fire grows thicker, ND818 is buffeted by the mid-air explosions as evil strands of tracer fire appear to lazily climb into the night sky from all directions.

Dobbyn strains to see the target through his bombsight, line the cross hairs up, then press the release button to drop the flares.

8th May 2015
58 Lancaster and 6 Mosquito Bombers attacked the target, only one failed to return.

The bodies of Allan Whitford and his comrades were found the next day by the German defenders and given a full military funeral in the local cemetery. Today their graves are tended by the community of Lanvéoc with support from the Commonwealth War Graves Commission.

Next Tuesday we are going to visit them, pay our respects and let them know that they are not forgotten.