Good evening everyone, from a beautifully warm and sunny Brittany.

Had a cracking run across the Vendée, even if the weather got a little petulant at one stage.

Stopped for lunch in Pornic, then crossed the Pont St Nazaire into Brittany, tonight’s hotel is in Auray and has a fantastic restaurant!

I took the opportunity to drop into St Nazaire and pay some more respects.

On 28th March 1942 British Commandos and the Royal Navy attacked and put out of action the lock gates at the port of Saint Nazaire in what has been described as the most incredible and courageous raid ever undertaken by the armed forces of any nation at any point in history. The RAF at that point in the war did not have aircraft or ordnance capable of doing the job

In essence the purpose of the raid was to disable the massive dry dock facilities and deep water dock, so preventing the German battleships Tirpitz and Sharnhorst from using the port as an Atlantic base. The main weapon used was an obsolete destroyer, HMS Campbeltown which was converted to resemble a German vessel, had it’s bow packed with explosives and then rammed into the dock gates. This was backed up with 622 Commandos who attacked pumping stations and other port facilities. Of the attacking force 169 men were killed, 215 became prisoners of war, 228 returned to Britain and 89 bravery decorations were awarded. More details Here.

The simple memorial near to the scene of the raid.

Adjacent is one of the guns from HMS Campbeltown, it’s barrel bent by the explosion that blew the ship and the lock gates apart.

I walked over and I can’t explain why, but I put my hand on that old gun and suddenly realised that I was touching a very, very, real piece of history. It is part of the mosaic like Jeese and Franck from earlier in our trip, that has contributed to the freedom that I have enjoyed this past nine days. I walked away wiping tears from my eyes, so much sacrifice, so much to be grateful for.

Old Nazi U boat pens at St Nazaire, roof is eight metres thick reinforced concrete. That’s why they are still there! 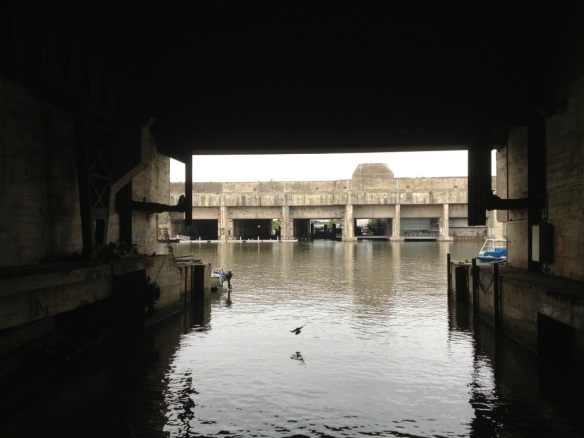 Inside the U boat fortified lock looking out to the main basin. 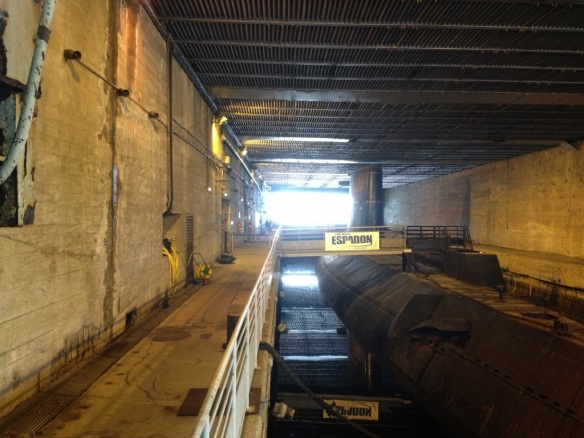 Old French Navy submarine, Espadon, in the lock, gives you an idea of what it would have been like with U boats being repaired.