The weather, that is, as we left the B&B the sun came out and I got quite optimistic. Well, for about fifteen miles that is….

Grabbed some motion lotion in Champeix and one or two drops of water began to appear on the screen. St Nectaire was still dry as we stopped for a quick look around, the village is famous for the cheese named after it that is produced around here. Gotta say that the place sort of underwhelmed me, though I did compare notes about the weather with the owner of a souvenir shop, we both thought it was pants! This hotel has certainly seen better days, but has a certain charm, if not fleas as well! 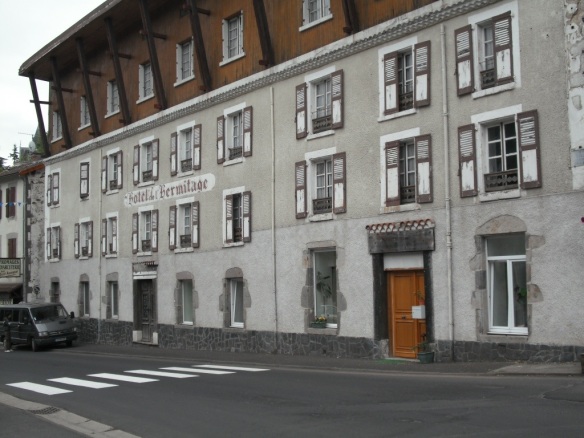 The climb to Col de la Croix Morand was meant to be the last triumphal mountain summit of the trip, but with heavy drizzle and mist it was far from joyous. It seemed that there was just enough water on the road to make it really slippery and not enough to give it a good washing. There were various signs warning that the road was “glissante en temps de pluie”, slippery at times of rain…they were not kidding! So slow safe progress was the name of the game. That’s the biggest difference between a real long distance trip and a couple of hundred miles day out, you gotta do it all again tomorrow and the next day, then the day after that. So prudence is needed more than bravado!
Anyway, we got to the top and clicked off another one. At 1401m, 4598ft, it’s no Galibier, but it is higher than Ben Nevis and you’d think twice about taking a motorbike up there….yeah I know there’s no road!!!!!!

Stopped for a pee in Bourboule, which must have more tacky souvenir shops than Torbay, Paignton and Dawlish Warren put together! Found a pretentious Café whose name made me smile, but didn’t fancy paying their prices for a coffee, so we hit the road.

At this point I executed plan B. I had intended to head cross-country to Limoges but with the weather slowing us down and no sign of any really nice improvement, I dropped onto the A89 Péage and gave Harley her head. I think she appreciated it! Once you get those Milwaukee twins at the right revs they’ll hold it all day and sing you a wonderful song as they do it…and that just happens to be at around the speed limit of 130Km on the French Autoroutes, give or take 10Km…well ok we took em, sometimes!

Regular followers know I like big impressive engineering, goes with the territory I suppose, but I really like big engineering made beautiful. This is one of those, Viaduc du Chavanon, opened in 2000 with a main span of 300m…it’s a beaut, a real modern take on a suspension bridge. Well done Les Français, you have shown the world yet again that engineering can be functional and beautiful at the same time, just like the Victorians did!

Well spotted that I didn’t take the picture, you can’t actually get a good shot from the nearby service area. My mate Fabien took it and let me use it. Thanks Fab!

After blasting the A89, we then crossed onto the old A20 up to Limoges. You certainly can tell that the two roads were built decades apart and that the ’89 is privately run, they really are worlds apart, but hey, it mile munches!

Couldn’t resist popping into Limoges Harley Davidson for a nose around and a free coffee to boot! Très gentille. Harley had a quick chat with some new friends as well. 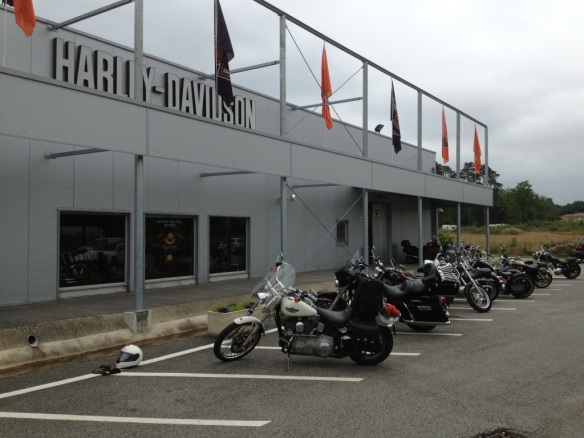 We next took the Rocade Nord and hooked onto the N141, which gave me a very pleasant surprise. This used to be a bit of a pig of a road, some bits dual, some falling apart, but now it’s all super new dual for all the miles we needed, until we turned off for the D948 and 148 all the way to Niort, our stop tonight. Gotta to say I turned into street fighter mode on these roads, wow, did I have some fun, old devil, eh?

Really ok hotel tonight, got of to a good start with the receptionist complimenting me on my French, head swelling time, but made me feel pretty good…I think she probably took pity on an old geezer!

View from the room tonight, a bit different.

Pleased to meet you, hope you guessed my name…