As has been the case most mornings of this trip, I woke early to bright sunshine and the promise of another lovely day. As I wandered into the breakfast room, still rather stuffed from the superb food last night, Denis pounced!
“Ah mon ami, le petit déjurner, c’est ce que tu aime?” I hardly had time to tell him I only really wanted a coffee and a croissant before he decided that he was going to cook an omelette for me! “Il sera le meilleur tout La France!” Oh dear, this was going to be a challenge.

He poured me a cup of coffee that would have shamed many small buckets and joyfully disappeared downstairs to his kitchen.

Looking out of the window my gaze crossed the lawn to the small lake that forms part of the Château’s landscaping, yes, today was going to be really nice. 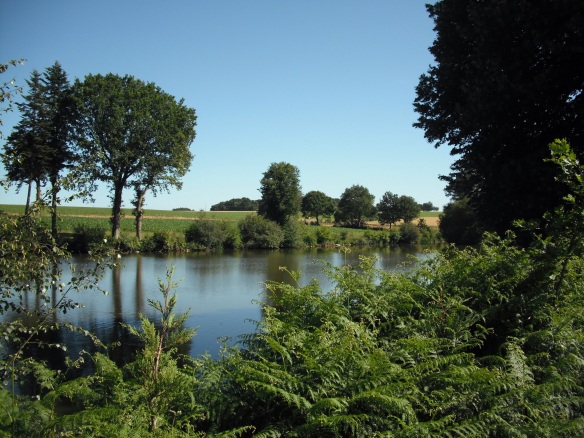 I sipped my coffee and awaited my super friend’s cooking. In due course Denis returned with his creation and just as he had promised, it was magnificent. How many eggs are in this I enquired, Denis just shrugged in that wonderful Gallic way, “Trois, quatre, cinq, je ne sais pas! Je me suis seul le cuisiner! Bon appétit!”

He swept away and left me alone in the sunshine, to eat and further reflect on my trip, life, the universe and everything. I came up with 42, which was strange!

Denis returned to see how I was doing and we talked of motorbikes, old railways of Brittany and the Tour de France, which starts about week from now. Denis loves his cycling. I told him that when I left the Château that I was going to Mûr de Bretagne to see where the eighth stage would end; there then ensued a wonderful little argument as he assured me that I was wrong, the stage would end in Vannes. I stood my ground, so he disappeared to fetch his cycling magazine. He returned a bit sheepish, I was right! More laughter, more shrugs, more handshakes, more smiles!

Later Baby and I paused at the spot where the day’s stage would end, two elderly French cyclists appeared and we chatted with excitement about the forthcoming visit of “Le Grand Boucle,” as Le Tour is so fondly known. Now that I’m heading into the realms of relative freedom, I hope to pop over to watch the excitement for myself one day; but not this year, Mrs Dookes gives me great freedom, but me clearing off again in just over a week would be a bit too much to ask!

From Mûr we took a leisurely trundle around central Brittany taking in Carhaix, Huelgoat, Morlaix and Carentec, before rolling onto the ferry back to Plymoth just after 14:00hrs. Time now for a shower and a snooze.

“Freedom is a dusty road leading to a highway.”

6 thoughts on “A Breton Morning”